The architecture of independence

The eagle's going to crack the shell
Of the egg that England laid,
Yes, so we can tell, tell, tell
On this humid Monday morning
In this congressional incubator,
And as just as Tom [Jefferson]
Here has written,
Though the egg may
Belong to Great Britain,
The eagle inside
Belongs to us!

— Sherman Edwards, "The Egg" from the Broadway musical 1776

How well did Boston crack the shell, architecturally? Did its colonial buildings follow in the footsteps of our forefathers, or flourish with the freedom of our founding fathers? Were they the eggshell of the old country, or the eagle of the new nation?

For starters, the Old State House (1713) boxed in all of its civic functions — the Royal Governor's Council Chamber, the Massachusetts Assembly, the Courts of Suffolk County, the first-floor Merchant's Exchange, and John Hancock's basement warehouse space — with the cramped confinement of an incubator and the selfsame symmetry of a uniform brick envelope as regimental as a procession of grenadier guards.

However, the Royal Governor's east-front balcony expressed an itch to breathe the air of freedom, the way its French window threw the room open to the open seas and skies of Boston Harbor (which was much closer to the building at that time). This made the balcony most fitting for New England's first public reading of Thomas Jefferson's Declaration of Independence on July 18, 1776 — as reenacted here by the Ancient and Honorable Artillery Company every Fourth of July — which was huzzahed by the ripping-down and bonfire-burning of the Lion and Unicorn symbols of British royalty (replicated in George A. Clough's 1880 restoration), exposing their Dutch stepped gable as steps toward freedom. 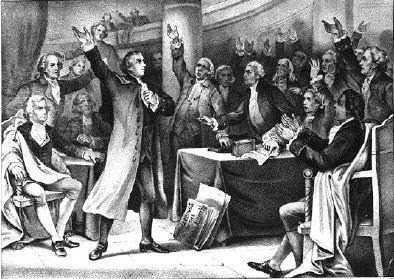 Nor did the Old State House's solid brick walls prevent its "eagles inside" from hatching. The freely elected Massachusetts Assembly were the originals, soaring as the Stamp Act Congress of 1765 when they circulated a letter to other colonies calling to meet to resist Britain's printed paper tax.
So was Attorney James Otis Jr. when he testified against Massachusetts Royal Govenor Sir Francis Bernard's Writs of Assistance in the Council Chamber of the "Old Towne House" in 1761. Otis' resolute oration gave rise to our Constitution's Fourth Amendment guarding against unreasonable searches and seizures.

“Otis was a flame of fire,” said John Adams, “…then and there the child ‘Independence’ was born.” Adams was another eagle, not merely for proposing the bird as our national symbol (over the objections of Jefferson and Franklin, who wanted the dove and the turkey, respectively), but especially for drafting the Massachusetts State Constitution — the model for our national one — in the Old State House.

Charles Bulfinch really cracked the State House shell by spreading his new one's wings, as an architectural articulation of the state Legislature's different governing bodies: the House of Representatives at center, the Governor's Council at left, the Senate at right, their checks and balances expressed by the balanced symmetry. 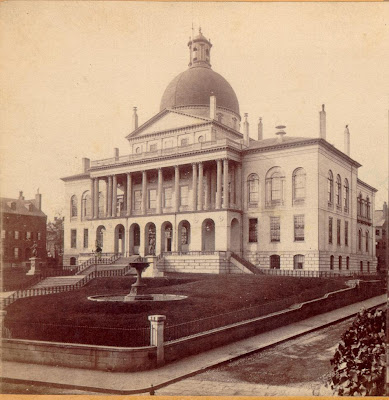 The dome, landmarking the State House high on the hill as the center and seat of commonwealth government and "the Hub of the Solar System" in Oliver Wendell Holmes' words, wasn't always a gold star. It was originally wood painted a lead color, but its frequent leaks prompted Paul Revere & Sons to clad it in copper in 1802, which oxidized to such an unbecoming green that it was painted gold in 1861 before being gold-leafed for the first time in 1874.

Painted black during World War II to deter bombing, this golden egg has been regilded almost as many times as the Bulfinch brick front was painted: yellow (hence its yellow-brick rear extension by Charles Brigham in 1895), white (hence its white marble wings by Andrews, Jacques & Rantoul in 1917), and its natural red since the 1920s.


Back to the egg

Not wholly independent in design, the State House depended on a British model for governmental grandeur and civic centrality — Sir William Chambers' Somerset House in London (1776!) — but took liberties with the dome, pediment, balustrade, colonnade and rusticated base it plucked from Papa's plumage.