And to think that I saw it on Mt. Vernon Street 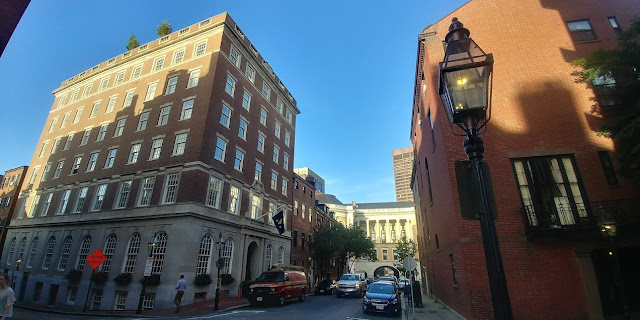 Dr. Seuss's classic tale of a boy who balloons his imagination to inflate "a plain horse and wagon on Mulberry Street" into a grandiose procession parading down the street to beat the band is quite applicable to a recent scoop about a building I once lived across the street from. Only this time the inflation is real—regarding property values, price, and space. 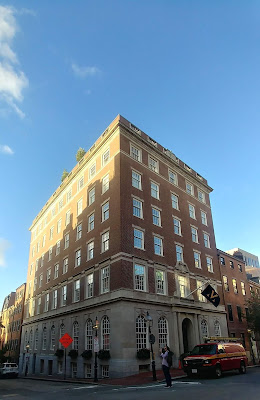 A spiffy, spacious condo in this 1917 Georgian Revival building at 39-41 Mt. Vernon St. sold for $5.5 million, the highest offer for a Boston home the week of July 21. To boot, its pre-construction penthouse broke Beacon Hill's condo record on July 2: $15.11 million. All including 24-hour concierge, doorman, elevator, and valet parking.

And to think that I faced this building from my bedroom getting up for school every morning and eyed penny-loafered girls arriving to work at its columned central archway—which symbolized career aspiration and literary tradition then but denotes nouveau riche now! Back then it housed Houghton Mifflin (HM), one of three nearby book publishers (Little Brown and Beacon Press were the others) intellectually inspiring all ilks of Bostonians from Brahmin to break-even (the Hill's demographics then), particularly with their curbside disposals of book proofs, overstocks and discards, which I scooped up eagerly. 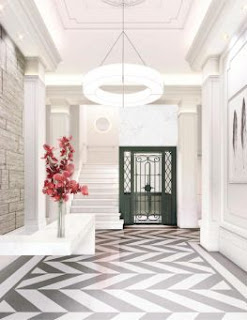 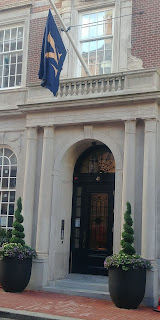 Now, rechristened Maison Vernon to reflect its new use and target clientele, its entry has been fancily retrofit with the twirling topiary, brand-name banner, cast-iron grillwork, striped herringbone marble flooring and détails classiques befitting the haute couture française that inspired its overhaul. Regardez: 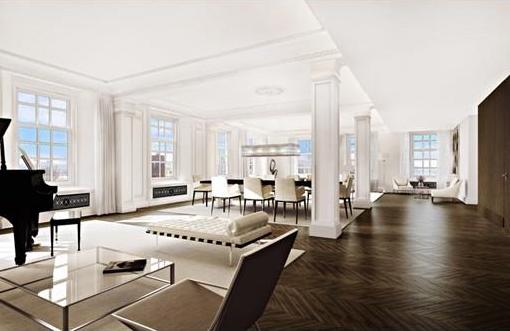 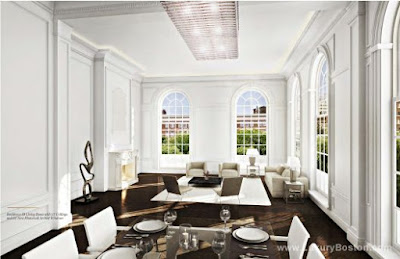 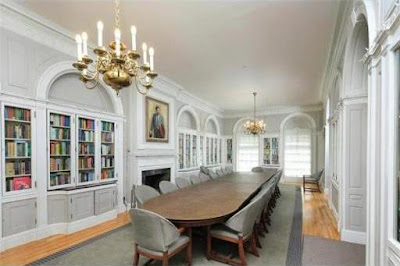 Architects Meyer & Meyer boast the equivalent on their site: "Maison Vernon simultaneously embodies the essence of historic Beacon Hill in its grandeur of yesterday, today and tomorrow. The result is seven iconic residences which we hope to leave as the new reference of Bostonian elegance.” 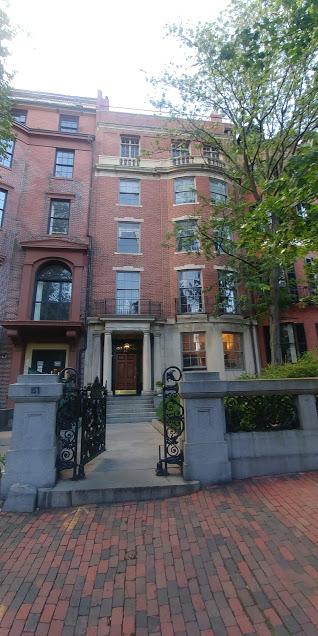 Yes, they've splendidly infused the interior with the classical spirit of the façade, for the outside-to-inside continuity HM's cramped offices, fluorescent lights and piles of books awaiting shipment (or disposal) didn't allow. But this is hardly the "grandeur of yesterday" of my youth, when we lived a few doors down at 61 Mt. Vernon St. in the early '70s.

First built c.1850 (as its curlicued cast-iron gate and rails with granite posts and frames signify), it was rebuilt in Beacon Hill bowfront style around World War I to accommodate five French flats extending back to Pinckney Street. This yielded the convenience of one-floor townhouse living without the stair-climbs the traditional rowhouses necessitated (further mitigated by an Otis elevator and a dumbwaiter).

But this commodity came at a price for us. Though splashed with some of Maison Vernon's delicate detailing, our first-floor condo unit was cramped with the spatial compromises that come with affordability. Two dark parallel corridors connected the foyer and kitchen with the back bedrooms, having little more use than to get us from point A to point B. 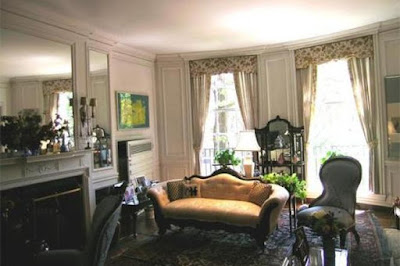 Still, this was Beacon Hill. And I had an additional rare privilege: two bedrooms, courtesy of the old servants' corridor that accessed my colorfully painted, pompon-festooned "circus room" en route from the kitchen through my father's home office to the hall to my larger, brighter Pinckney Street bedroom. 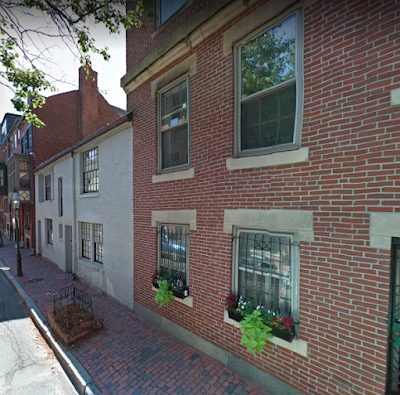 From there, stories spun before me, ranging from pleasurable to pathetic. The former included an ogling of my first crush, my upstairs neighbor Celia, tomboyishly sporting a football jersey. The latter was as downbeat as the rain that fell on the little brother–big sister row I witnessed from my window: "I'm gonna tell Mommy on you!" "Oh? What are you going to say?" He screeched something like "Shut up!" She ran off, leaving him walking in the rain, bawling, with no head covering. I wanted to cry for him. 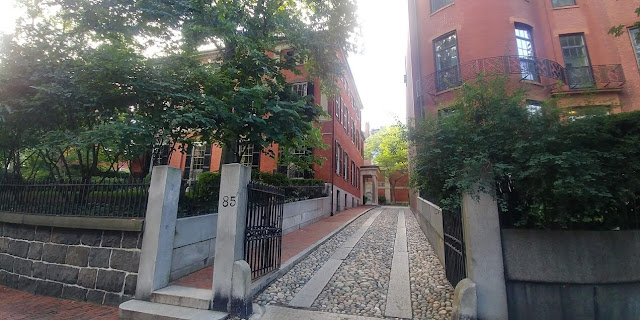 But Mt. Vernon Street had much more for me to cry for. A few more doors down what Henry James deemed "the only respectable street in America" is the stately second home of Boston lawyer, statesman and grandee Harrison Gray Otis at No. 85. Designed by Charles Bulfinch in 1802, it was the last of the freestanding Federal mansions the Mount Vernon Proprietors had conceived for Beacon Hill until rising land values made rowhouses the norm of the neighborhood.

The well-proportioned beauty of the house's tall living-room windows, Corinthian pilasters, oriental cast-iron balcony fretwork, classical balustrade, octagonal cupola and cobblestoned entrance court made me envy David, the schoolmate who had the privilege of playspace unlimited. Nor did I feel he deserved it, after the time he taunted me and stuck a piece of tape on my knapsack as I passed by on the way home from our school. 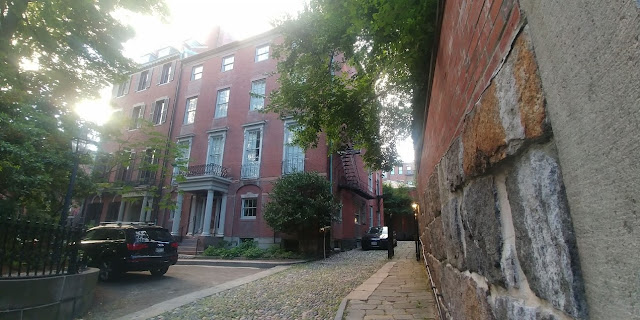 Another enclave of envy was here at No. 87-89, first built in 1805 by Bulfinch, and demonstrative of the gradual mansion-to-rowhouse transition that evolved Beacon Hill as its land values increased. No. 87, the only remaining Bulfinch original, echoes No. 85's diminishing fenestration according to the importance of the rooms on each floor. Its bracketed lintels (also used on Otis's third home on Beacon Street) add touches of class that befit the intellectual depth of its occupant, the Colonial Society of Massachusetts. 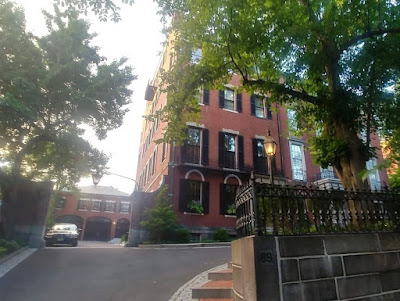 No. 89 was rebuilt in brownstone in the 19th century and redesigned in brick in 1925 to make it more "Beacon Hill." At first I was fooled into thinking it was a Hill original; the giveaways of its age are the anachronistic lintel arches, the equality of the window sizes on the top two floors, and the three-door garage, designed for the unheard-of in the Hill's heyday: the automobile. 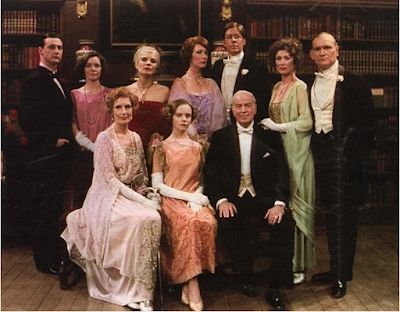 Which made it an ideal setting for the aptly titled but ineptly scripted 1975 TV series, Beacon Hill. Modeled on Upstairs, Downstairs, this short-lived show concerned an upperclass family, the Lassiters, at the time of Prohibition in the 1920s, and their up-and-down relations with their servants, with whom they shared a common Irish heritage, slightly narrowing the caste gap. 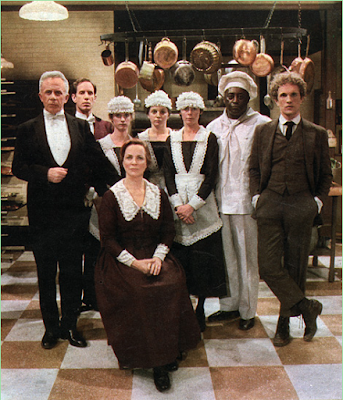 The evening the show debuted, my other upstairs neighbor Chris was staying overnight with a friend nearby, which put Chris in the right place at the right time to be a handful of Beacon Hill residents interviewed by The Boston Globe on their reactions to the show. With the unusually effete eloquence for an 8-year-old only child I envied him for, Chris told the Globe that the characters were "a boring class of people who don't get on with each other." ("Did TV find 'Beacon Hill'?", The Boston Globe, August 26, 1975) Which may have made him a spokesman for the Hill's viewers in general, for the show was canceled after 11 of its 13 episodes.

And now, as a correspondent for Boston Homes magazine who writes about pricey luxury properties for sale in Boston, I can't say that I can find Beacon Hill either—because I can no longer afford it.