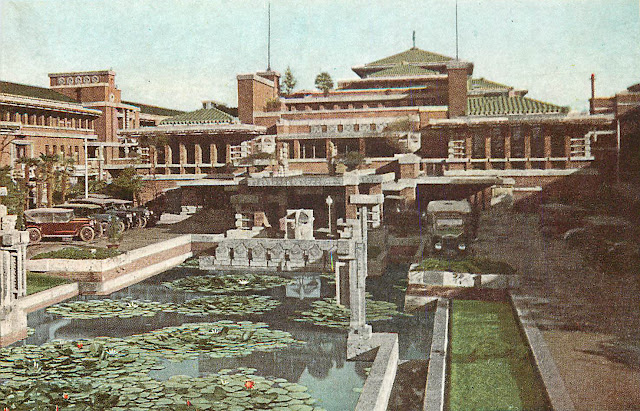 Of the 532 buildings Frank Lloyd Wright realized over his 70-odd years as an architect — "including houses, offices, churches, schools, libraries, bridges, museums, and many other building types," quoth the Frank Lloyd Wright Foundation — what could be called his masterpiece? What is the supreme summit and synthesis of his endless efforts to burst the box of blah and rip open the business-as-usual building envelope to create a truly truthful architecture that extols the nature of its materials and the culture, psyche and spirit of the people that live in and around it?

My answer would be the Imperial Hotel in Tokyo. Though this rightful King of the Franks was ultimately dethroned and decapitated, it has left an imprint in the memory as the highest attainment — despite its low scale, which ultimately sealed its fate — of Wright's goals to revive ancient architectural traditions with modern building techniques and materials, to revere the nature that produced those materials and inspired the local populace, and to revivify the lives of those people with all of the above.

As an avid collector of Japanese prints, Wright was inspired by the linear simplicity, the spatial fluidity and the natural reverence of Japan's architecture, from the intimate human scale of its houses to the imperial grandeur of its temples and palaces.

The houses hugged the earth with their low-lying horizontality and one-level living, while the palaces mimicked the mountains with their soaring clay-tiled roofs and paid homage to a Buddha, ancestor or god with their profundity of adornment.


Simplicity of structure contrasted with opulence of ornament, but the latter did not obscure structural expression as traditional Western norms did. For Wright, Japanese architecture was the perfect union of opposing yin-yang forces he was seeking in an expressive yet livable style of architecture that was of, by and for its people, rather than imposing itself on its people the Western way.

Thus he eagerly accepted his 1916 commission from the Imperial Household of Japan to design a new hotel in downtown Tokyo — a city whose newest construction greatly displeased Wright. He said:

"The time of awakening must come sooner or later. And then the country will be face to face with the costly necessity of getting rid of all these architectural monstrosities and evolving a style more in consonance with Japanese traditions and really characteristic of the people." 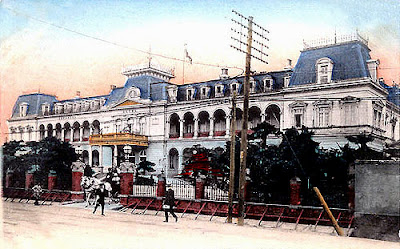 Surely Tokyo's first Imperial Hotel was among Wright's peeves for its foppish, haughty hybrid of French Second Empire and Italian Renaissance styles. Built in 1890 from a design by a Japanese student of the Rokumeikan's architect, Englishman Josiah Condor, it was as un-Japanese as a hotel could be, despite being locally known as Teikoku Hoteru (Imperial Hotel). On April 16, 1922, it was destroyed by fire, giving Wright a wider opening to combat that imported white elephant with the native touch of the ancients.

The new Imperial Hotel was also to represent Japan's emergence from an isolated island of primitive folkways into the modern nation it had become since U.S. Navy Commodore Matthew Perry had opened it up to American trade in 1854. To these ends, Wright conceived the hotel as an east-west hybrid that adapted... 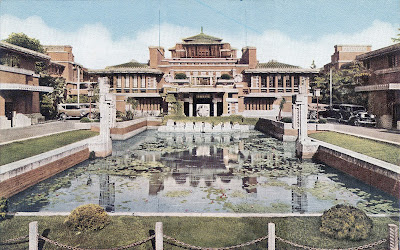 With the creative playfulness of the Froebel block-building child he once had been, Wright arranged these elements in the form of a vast, extensive oriental temple of interconnected buildings of Roman brick, poured concrete and concrete block, green-carpeted with a lily-padded koi pond.

In this way he elevated all three of the above styles to a primitive yet prim imperial dignity high enough to feel reverent yet low enough to feel at home.

Remembering the 1894 earthquake's damage of Tokyo's first Imperial Hotel, Wright placed the new one on a floating concrete foundation he devised to withstand seismic activity...

...and on the very day of the hotel's dedication on Sept. 1, 1923, the great Kanto earthquake struck Tokyo and Yokohama, destroying more than 570,000 homes and claiming more than 100,000 lives, but leaving the Imperial Hotel (pictured, right) intact with minimal damage. The floating foundation assured its salvation. 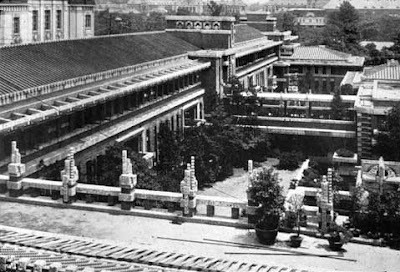 Wright retrofit the roof perimeter with copper rain gutters that drained stormwater through elaborately patterned grills, shaping it into 50 to 70-foot-high patterns as it fell into the courtyard below — a cascade of fountains drawing on the powers of nature to achieve their ceremonial dignity at no water-bill expense. 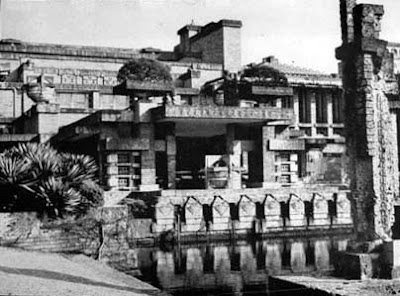 Arriving guests were cooled by the pond and received under the porte-cochère, which reminded some of Chichen Itza's Mayan ruins on Mexico's Yucatan Peninsula. A soft Japanese lava stone called Oya enabled Wright to proliferate the hotel with Mayan-style carving, including geometric abstractions of scarabs, turtles and peacocks. 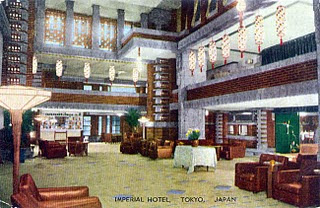 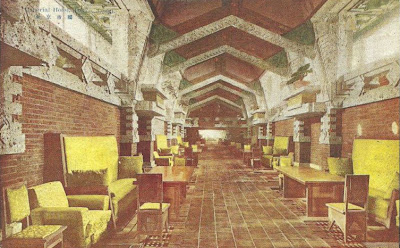 The lobby's beige and turquoise Native American carpets, woven in Peking, led guests through a labyrinth of quirky staircases and passages (such as "Peacock Alley," right) into a double-height dining room, theater, lounge and ballroom, all full of geometric whimsy and ancient spirit... 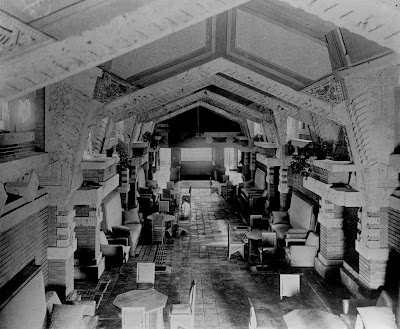 To some, the lavish, poignant, intricate carvings, moldings and panelings recalled the richly patterned stonework, woodwork and earthwork of Egyptian, Mayan, Incan, Aztec, Native American, Indian, or Asian cultural traditions, depending on where in the world they were coming from and what they had seen before on their world travels. 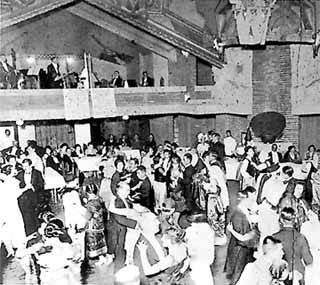 To others, this dynamic décor was "Wright" in step with the Art Deco jazz age of the '20s and '30s — particularly the quirky angles, explosive excess and free-form fancy of the Peacock Room, which blended with the blue-note brassiness of the jazz that rocked the room while crowds danced the Black Bottom, the Boogie-Woogie, the Charleston, the Foxtrot, the Jitterbug, the Lindy Hop, the Swing, the Tango... 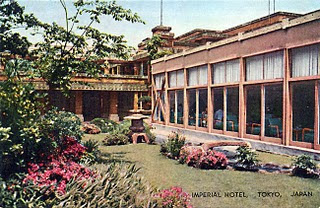 For respite from the jazz-ma-tazz, the thick-walled guestroom wings lined up along the reflecting pool, veiling Tokyo's congestion and muffling its clamor in the peace of a garden oasis of lily pads, koi carp and bonsai trees, aided by soft light filtered through the thin windows and perforated overhangs.

The courtyard took cues from Japanese gardens such as the Ryoan-ji Zen temple's kare-sansui in Kyoto, where stones were revered for their natural shape and placed to induce a meditative state in the onlooker. Garden walls were high enough to screen off civilization yet low enough to expose trees, for a calming continuum between nature within and nature without. 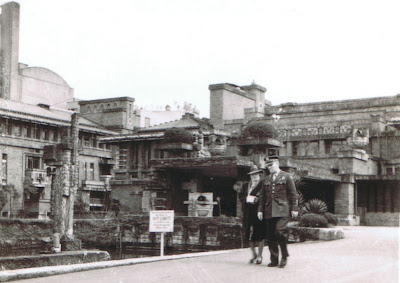 The U.S. Army used and greatly altered the Imperial Hotel as a barracks during the American Occupation of Japan after World War II, during which General Douglas MacArthur paid a visit to the troops at the hotel. It is said that Wright was requested to redesign his masterpiece for this purpose, but he refused. 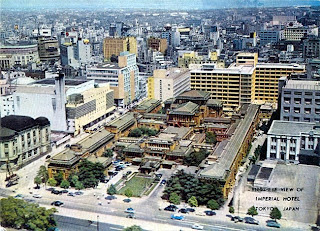 But against his will, rising operating costs and increasing tourism necessitated expansion of the Imperial Hotel. The yellowish modern annexes, opened December 1, 1952, and August 1, 1958, epitomized those "architectural monstrosities" Wright abhorred — which foreshadowed the fate of his creation. 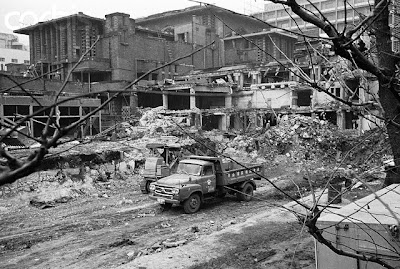 By 1968, floods, earthquakes, pollution and wartime bombing had critically damaged the hotel's structural foundations, which a team of seismic specialist declared unsafe to endure future tremors. Besides, the hotel's low scale and vast greenspace didn't stand a chance against Tokyo's rising land values.

Despite a plea from Wright's widow Ogilvanna to save and restore the building, the hotel management decided it was more cost-effective to tear it down. And so they did, along with its annexes.

Yet another architectural monstrosity replaced it in 1970: a monolithic gray 17-story hotel comprising a pair of vertical cross-slabs with more than double the old hotel's number of rooms — which certainly reflected Tokyo's rising land values, both architecturally and numerically. The new digs sparsely preserved the old hotel's memory by primping up common areas with Wrightian designs and motifs.

But the memory is more faithfully preserved near Nagoya, Japan, at Meiji Mura, an open-air museum of architecture from Emperor Meiji Tenno's reign, where the original entrance pavilion, lobby and reflecting pool let you experience a portion of the imperial power of Frank Lloyd Wright's Asian-American masterpiece.


For a seven-minute filmed tour of the Imperial Hotel's reconstructed grounds at Meiji Mura, visit:

For a 10-minute presentation by architect Edgar Tafel of slides he had taken of the Imperial Hotel's demolition in 1968, visit: