Not to be outfoxed

The nation’s second largest theatre (after New York’s Radio City Music Hall) in its time, the Fox was one of five Fox theatres built across the country in the 1920s by William Fox, founder of Twentieth Century-Fox.

The auditorium, 110 feet high and 175 feet wide, contains 5,048 seats over three levels; 126 more seats can be installed in the raised orchestra pit. The canopied ceiling adorned like Indian durbars is its main attraction until the house lights go down and...
...the curtain goes up.

The gallery is hardly the peanut gallery, despite its cheaper seats. Richly gilded Far Eastern décor seems to give the lower-priced ticket holders a royal welcome from the King of Siam, and the in-the-round configuration contrasts the vastness with more of a sense of intimacy.

The six-story lobby is an extravaganza of ruby-eyed lions, jeweled Asiatic idols, blood-red marble columns, ornate capitals, and an organ above the brass-door entrance (below). Ornate capitals segue into multi-tiered brackets that give rise to an exotic ceiling fresco as a chorus of regally robed trumpeters introduce the king.


The Fox opened on September 21, 1928, showing Frank Borzage's silent film Street Angel, starring Janet Gaynor, Charles Farrell, and Alberto Rabagliati. Before the film, the 60-piece Fox Grand Orchestra rose out of the floor and performed the Star-Spangled Banner, followed by high-kicks from the 32-strong Tillerettes, Detroit’s own Rockettes. 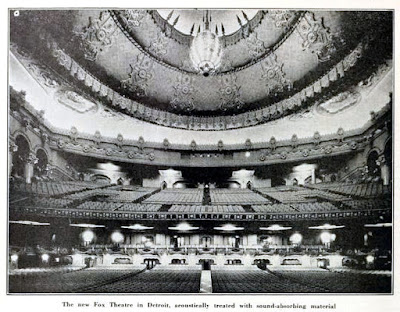 “Detroit’s Fox Theater has the largest clear span balcony in the world,” reported the Detroit Free Press. “The stage proper is larger than the Roxy Theater in New York, and has the largest and finest projection room and equipment of any theater in the world.” More Foxy than the Roxy, the theatre boasted the first built-in equipment for showing sound films, to accommodate Fox Film Corporation’s patented Movietone soundtrack system, which accompanied Street Angel. Its sound quality was greatly enhanced with its acoustic treatment with "sound-absorbing material," as this 1929 image notes.
The Fox was Detroit’s main movie mecca for decades. During World War II it took $75,000 weekly, boosted by the likes of Louis Armstrong, Jack Benny, Kate Smith, Sarah Vaughn, Peggy Lee and Benny Goodman's orchestra. In 1953 it premiered Michigan’s first CinemaScope film, The Robe, shot with Henri Chrétien's original Hypergonar anamorphic lenses.

In 1956, the Fox hosted Elvis Presley before a total of 12,500 screaming fans. In 1964, the Fox broadcast Muhammad Ali winning his World Heavyweight Championship boxing title over Sonny Liston on closed-circuit TV. Throughout the ’60s, Motown — which Berry Gordy founded in Detroit in 1959 — held its Motown Revue at the Fox, showcasing such homegrown talent as the Temptations, the Supremes, Smokey Robinson and the Miracles, and Martha Reeves and the Vandellas.

Following a period of decline as a kung fu and horror movie house in the 1970s, Little Caesars owners Mike and Marian Ilitch restored the theatre for $12 million in 1987 and headquartered Ilitch Holdings Inc. in its 10-story Art Deco office building. “The Detroit Fox is the most spectacular, over-the-top movie palace ever built,” said theater preservationist Ray Shepardson, who oversaw the restoration. Its 60th anniversary reopening on November 19, 1988, featured Smokey Robinson and the Count Basie Orchestra.

Not only was the Fox ranked “the No. 1 theater in North America” by industry trade journal Pollstar for having sold 642,000 tickets in 2002 — surpassing Radio City Music Hall — but its restoration also revitalized its once-depressed area. It brought Compuware’s headquarters downtown from Farmington Hills in 1999.

The Fox also led to the erection of Comerica Park for the Detroit Tigers in 2000 and Ford Field for the Detroit Lions in 2002, as well as the renovation of General Motors’ Renaissance Center headquarters in 2004, which included a Wintergarden for public riverfront access.

Another major urban revitalization project the Fox Theatre has spurred into action is the long-overdue renovation-restoration of Detroit's 1914 Michigan Central Station by the Ford Motor Company, after 30 years of neglect and decay.

“Detroit may be the most vivid example of theaters leading the way in redeveloping a downtown,” said Doug Kelbaugh, dean of the Taubman College of Architecture and Urban Planning at the University of Michigan.

Now that's a theatre not to be, well, outfoxed.