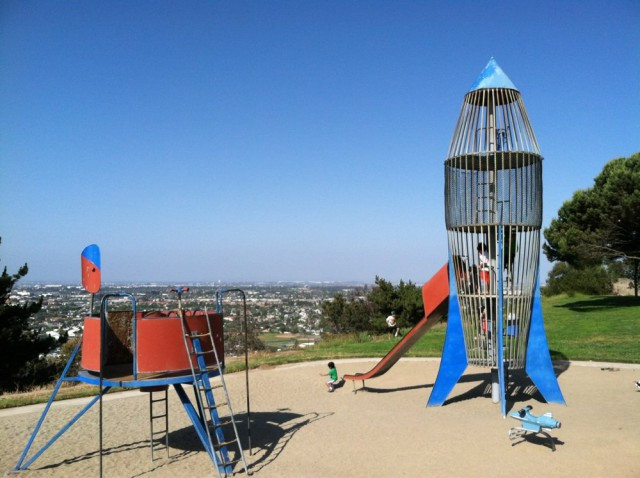 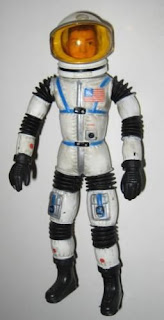 Our observance of the 50th anniversary of the Apollo 11 moon landing hearkens me back to my childhood days of moon-talk, moon-toys, and moon-tomes saturating the scuttlebutt, stocking the shelves, and pervading the papers, mags and airwaves as we went moon-loony over the prospect of not merely beating the Soviets there, but going there themselves someday.

Consequently, moon-merchandise was piquing my infantile interest by the megaton. Books like Mae & Ira Freedman's You Will Go to the Moon and Laurent de Brunhoff's Pop-up Book of Babar's Moon Trip. And who can forget those toys: Operation Moon Base by Marx...Moon Explorer by Yonezawa...Radio Controlled Moon Patrol by Gakken...Rock Gripper and Ionization Nebulizer by Star Team...Outer Space Men by Colorforms...Apollo 11 American Eagle Lunar Module, Made in Japan...Billy Blastoff by Eldon...High Bouncer Moon Scout by Marx... 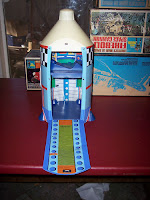 But few toys were more out of this world than Mattel's Major Matt Mason, a bendy astronaut with orange-tinted helmet and enough accessories to make a space command center out of your den. By the time I'd acquired his Space Station, Space Ship Case, Space Crawler, Rocket Launch Pak, Space Probe Pak, Moon Suit Pak and a few other gizmos, I had taxed my folks for a bill that would rival a ticket to Woodstock 50 in today's dollars. 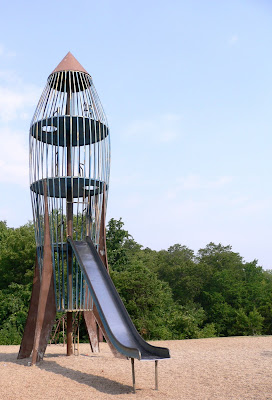 Yet the space plaything I most fondly remember—and could indulge in for free—was the rocketship jungle gym and slide, an example of the Cold War playground equipment skyrocketing all over the country to pique kids' curiosity about our space race with Russia.

One stood in John Jay Park in Cherokee Place in New York when I was living there, and I marveled at its structure alone. Its steel rods emphasized the verticality of the upward liftoff of a rocket, its three levels of ladder-climbing gave me a sense of command, and its slide into the sandpit symbolized the splashdown I loved to watch at the end of space flights.

But now that our moonshot ambitions have been scuttled in the name of earthly concerns and these climbers have been deemed unsafe for kids, they're but nodes of nostalgia.