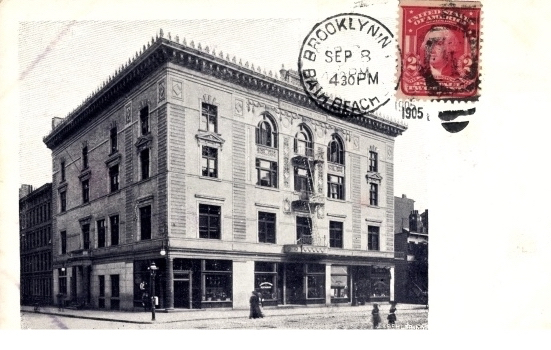 And so did I, which is why I remember it well. But if you don't, no worries, for it went the way of JFK & Son. And since we're observing the anniversaries of two Kennedy-related deaths—the July 16 loss of John F. Kennedy Jr. and his wife and sister-in-law in a plane crash 20 years ago, and the July 19 asphyxiation of Mary Jo Kopechne in Sen. Ted Kennedy's car plunge by Chappaquiddick Island 50 years ago—I thought I'd remember the place where, according to my mother, I once had a fight on the mat with John-John himself. (I have no recollection of it, but who the victor was in our tussle was evident, given his immediate models for resolve: Papa John, Uncle Bobby, Uncle Ted.) 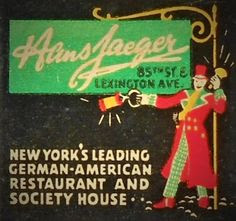 Anchoring the corner of Lexington and E. 85th in New York's Yorkville, this building was known by many names: New York Turn Verein (NYTV), Turn Hall, and Jaeger House. That was Hans Jaeger's first-floor Hofbräuhaus, where locals quaffed Jakob Ruppert's Knickerbocker beer eins, zwei, g'suffa and noshed sauerkraut-slathered Bratwurst, Knackwurst and Wienerschnitzel by the kilo in the intimacy of dark wood booths. 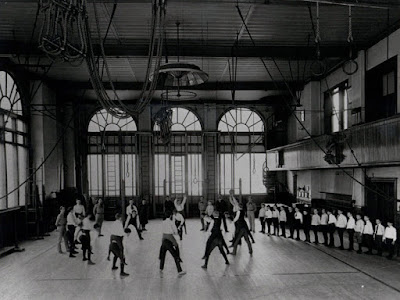 Meanwhile, the Turn Verein (German for "gymnastics club") attracted crowds to events of all sorts on all levels. Bowling was in the basement. Dancing, fencing, a chess club, the German School with reading room and library, mental gymnastics (Geistiges Turnen), and publication of the periodical Bahn frei! were on the second floor. Dramatics, singing, and social fêtes thrived in the third-floor auditorium. (I fondly remember a children's assembly there. The highlight of the evening was a boy's flamboyant rendition on "On Top of Spaghetti."). Athletic comps, rifle-club drills, and, of course, gymnastics classes, trainings and tourneys energized the vast, light-filled top-floor gymnasium, which this vintage image of the gym of Milwaukee's German-English Academy (1890-1892) resembles. (Three NYTV Turners went on to the U.S. Olympic Team in 1924.)

This was how the Turn Hall architecturally symbolized, and provided space for the fulfillment of, NYTV's motto "A Sound Mind in a Sound Body" (Ein gesunder Geist in ein gesunder Körper). In so doing it became the main community center for Yorkville's growing Germanic population—and was built just in time for the mass migration there from the Lower East Side after the 1904 General Slocum passenger steamboat fire that had claimed 1,388 lives during its annual East River jaunt.

This continued NYTV's custom to welcome NYC's Deutsch-Amerikaner with distinctive architecture since its founding at Stubenbord’s Restaurant at E. 48th and Beekman streets on June 6, 1850. After residence in a Quaker church on Orchard Street from 1859-1872, it moved to larger facilities at 66-68 E. 4th St. Pediments, brackets, modillions and bold cornices distinguish this structure, which now houses La MaMa's Ellen Stewart Theater and Archives and the Millennium Film Workshop. 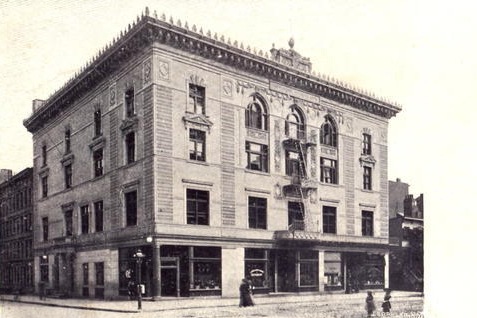 NYTV's growing membership, coupled with Kleindeutschland's movement to Yorkville, prompted the organization to seek a larger facility there, dedicated as the new Turn Hall in 1898. True to Turn Verein design, it flaunted a lavish admixture of neoclassical ornament—pediments, brackets, festoons, quoins, modillions—surmounted by an urn-topped crest reminiscent of the crown of Germany's Brandenburg Gate.

The storefronts were as humble as the immigrants' entry-level beginnings in the New World. The ornament on the upper floors signified the importance of the spaces inside, the rich aspirations of the new American citizens, and the fortitude of the Turners that taught and took gym up there. The trio of arched windows showed that the gymnasium contained all the light, space and headroom necessary for a good body-build, pole-vault, rope-climb, ring-swing, parallel-bar workout, or pyramid formation to attain muscular elegance. 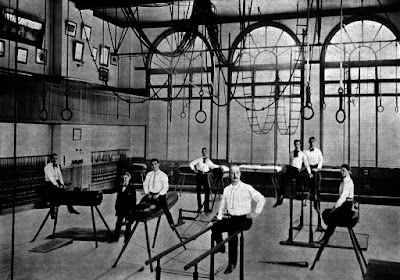 But that frippery did not herald the palatial pomp of the Waldorf-Astoria inside. The Turners beat the Modernists to the punch in bare-bones functionalist design, stressing equipment over embellishment, as shown in these archival images of the Milwaukee and Indianapolis Turner Halls, which resemble the main gymnasium at NYTV.

The principal design elements, then, were the clean lines and geometric shapes of ropes, rings, parallel bars, weights, floor planks, etc., and their barren materials: hemp, wood, metal, leather, vinyl. The efficient simplicity of the gym design reflected this, as a framework for the promotion of the workout tools, not useless adornment. 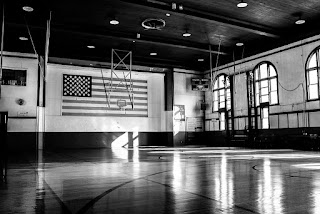 The 20+ foot ceiling allowed diffusion of heat and dangling of rings, ropes, ropeladders and basketball nets from high places, as well as gallery space for spectators. Load-bearing beams replaced floor-obstructing columns as crafters of protomodernist open space as well as symbols of gymnastic strength and endurance. The colossal arched windows gleaming sunlight on the floor awed us beyond words. 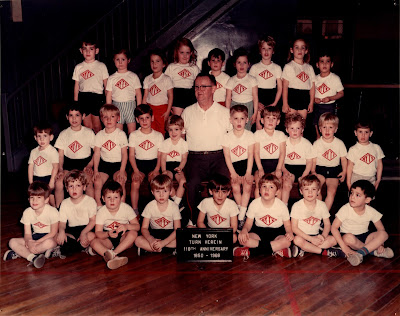 This is my NYTV Class of '68. I am fourth from the left in front, appearing anxious about the staff-wielding Mr. Schroeder's (center) next herculean task. My favorite was scissor-kicking at warp speed on our backs while imagining we were cycling to 42nd Street and back to 85th. I also loved to "do the hoky-poky"—the only calisthenic old out-of-shape Schroeder actually did with us.

The angled hardwood floor that endured generations of gymnasts' rough-and-tumble and the background iron stair to the gallery were all in fine functional form here, complementing the angularity of the ceiling beams to dramatize the Turner technique's physical challenges. Those angles also conveyed the movement, the action expected of us. This was certainly in line with what was expected of a Kennedy—though JFK Jr. is conspicuously absent from this picture. And no wonder: 1968 was the year of Robert F. Kennedy's assassination and Jackie's consequent expatriation of her family to her new husband Aristotle Onassis' private island of Skorpios, Greece, for their safety. Which meant no more mat-maulings with Bobby's nephew for me.

But even without my Kennedy cohort, excitement abounded along those diagonals.

A rigorous but risible moment I remember was a relay run around a succession of tall red cylindrical markers in an S-curve fashion, alternating right and left. As a behaviorally deviant child yet to be diagnosed with Asperger's syndrome, I associated the cylinders with giant candles I had seen at a fair and compulsively chanted to TV's Comedy Capers theme, "K-candles! K-candles!"

A boy eyed me with a mystified mien and blurted crossly, "Those aren't candles!"

I did my ditty again. And then:

"If you sing 'K-candles' one more time, I'll take you over to Mr. Schroeder."

I shut up p.d.q., as the Meister's floor-striking staff and butt-paddling palm always gave me the heebie-jeebies. But I was too amused by the affair to be embarrassed by my eccentricity. 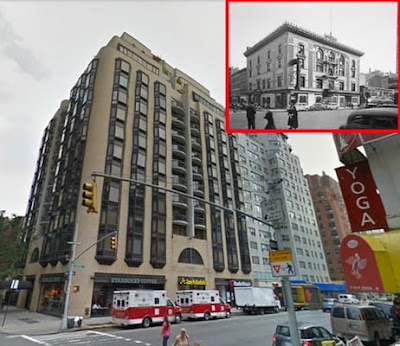 Sadly, declining membership and neighborhood gentrification forced NYTV to merge and reopen as American Turners in the Bronx and sell Turn Hall to European investor Epurio, N.V., to raze for the bland Ventana Condominium in 1984. Even its token arched window and glass bays can't replicate the Teutonic temperament, community character, or zeitgeist of the original.