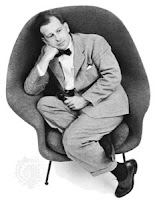 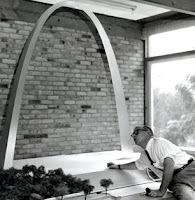 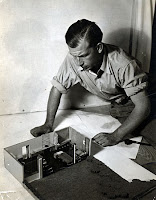 Can you believe the great Finnish-American architect Eero Saarinen was born 100 years ago today? The timeless tenacity of his concrete curves, stainless steel, swinging swoops, window walls, curvy chairs and toadstool tables do not look like the legacy of a centenarian. But they're always worth a second look, which I will do below. 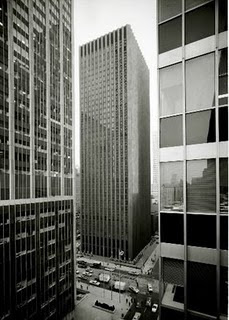 This is always worth a second look, especially in light of the dim view of it New York Times architecture critic Paul Goldberger took in 1979:

CBS is decent architecture and terrible urbanism... Saarinen's only skyscraper has been overly praised, which, given the mediocrity of its neighbors on Sixth Avenue, may be understandable. But when viewed in absolute terms, this is a rather flawed building. The granite-clad tower stands absolutely aloof, in a depressed "plaza" of its own making. The lack of an entrance from Sixth Avenue, where there are stairs down from the sidewalk placed as if only to tease, is especially galling. This is the building as pure object, not the building as a part of a complex, functioning city. (Paul Goldberger, The City Observed: New York: A Guide to the Architecture of Manhattan, New York, Vintage Books, 1979, pp. 174-175) 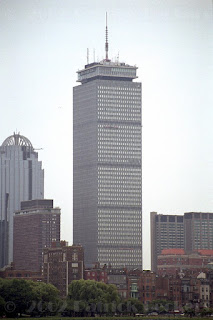 One could say just that about the building's 1965 contemporary, the Prudential Tower, Boston's most "aloof" building in architectural style (anti-Victorian "freshness," to be sure), contextual placement (a standalone monolith, America's tallest building outside of New York at its dedication), mediocrity of surroundings (its forecourt plaza will never be Rockefeller Center, and its contemporary hotel/apartment blocks are just that — blocks), confusion about where its entrance lies (more recently clarified and dignified by its Shops at the Prudential Center extension), and stalwart refusal to communicate compatibly with a historic neighborhood. Turning a cold, nondescript face toward its neighbors on each side, it always appears to have its back toward us, save for the skywalk-level signage that meets its minimum frontage requirements and, at least, makes it clear whose hat it wears. 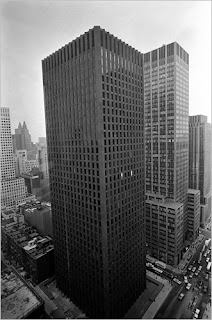 Not only does the CBS building possess everything the Pru lacks — Class, Beauty, Style — but the Pru's liabilities are CBS's assets. Saarinen himself tells us how:

We tried to place the building on the site so that we could have a plaza and still not destroy the street line. A tower should not be tied in with lower street buildings. It should stand alone with air and light around it. A plaza is a very necessary thing in a city. It lets people sit in the sun and look at the sky. A plaza allows a building to be seen. Our buildings should be seen, because they are monuments of our time. (Aline B. Saarinen, ed., Eero Saarinen on his Work, New Haven and London, Yale University Press, 1962, pp. 16-17)

Its solitary plaza siting gives it an all-around setback that allows all of its offices light and air, not just those privileged to be above the abutments, on the street or over the courtyard in a typical block-locked building.

However, as you may gather from the above photo, the light and air of the office ambiance is counterbalanced by the darkness and heft of the facade itself, another conscious intention of Saarinen:

Which leads me to the Nordic facet of CBS: how it expresses the spirit of Saarinen's Scandinavian origins. 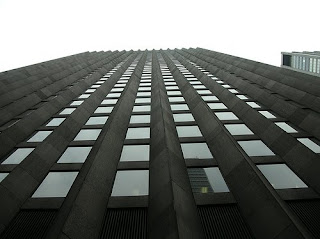 The facade intersperses triangular black granite piers — hence its sobriquet, Black Rock — with vertical window strips. The former geometrically abstract Finland's mountains, the latter allude to its fjords, referencing its characteristic land-and-sea dichotomy. When viewed from an acute angle, each face appears to be a solid masonry wall — a visual trick the Pru's immutable boxiness can't dream of playing.

The sunken plaza reinforces the fjord/mountain contrast with a depth like a moat surrounding a mountainous castle and a perimeter like a lake encompassing an island, e.g., Crater Lake's envelopment of the extinct volcano Wizard Island, or the real moat encircling Saarinen's 1955 Kresge Chapel at MIT (right). This could indeed lay a foundation for Goldberger's isolationist stance on the CBS building, but it also creates the much-needed multicultural diversity Sixth Avenue was sobbing for.

Also unlike the Pru, slender steel mullions are gone in favor of a more naturalistic, less mechanized appearance. This emphasis on granite posts could have ushered in the postmodern era, the historically referential negation of the International Style's modernist monotony. CBS's chief rebuttal to the International Style's glass-and-steel uniformity is its contrast of solid and void: solid granite, transparent windows, like the Finnish landscape's contrasts of rock-solid mountains with fluid, open fjords. 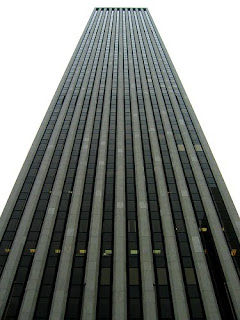 Dark as bark, the granite posts recall the Finnish forests in terms of somberness and straight-up growth — another of Saarinen's intents for CBS:

The continuity of the posts and their sharp edges certainly do lead the eye upward, accomplishing Saarinen's ultimate goal for the building:

The verticality of the tower is emphasized by the relief made by the triangular piers between the windows. These start at the pavement and soar up 491 feet. Its beauty will be, I believe, that it will be the simplest skyscraper statement in New York. (Ibid.)

Goldberger called Skidmore, Owings & Merrill's 1950 Manhattan House "a very fine building but a very bad model" (Ibid., p. 264). He could justifiably say the same for CBS, in light of the "terrible urbanism" its emulators wrought in their neighborhoods. 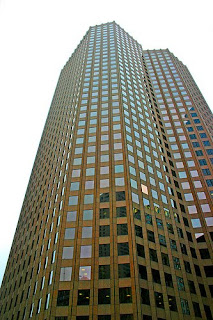 A case in point is SOM's 60 State Street in Boston. Built in 1977, this 509-foot, 38-floor office building is a rather nondescript attempt to "Bostonize" Saarinen's fjord-and-forest Finn-esse. His alternation of triangular granite piers with floor-to-ceiling window banks is reprised here, as is the entry plaza, all with regional modifications.

The use of pink granite jibes agreeably with the colonial city's red-brick vernacular prominent in neighboring Faneuil Hall and City Hall Plaza, but the apex slots of the piers — apparently window-washing equipment tracks — weaken the rock-solid mountain effect Saarinen intended for CBS, thereby exposing the granite as a tacked-on facade and destroying the illusion of structural fortitude that works so well at CBS. Wider and shallower windows yield a brighter and a tad broader office interior.

The plaza is raised rather than sunken, to make it level with State Street for clock-wise CEOs who don't have time to go up and down steps, and to allow for ground-level restaurant/bar commerce for Freedom Trail tourists and others. Of course, the Hillstone restaurant required a ventilation duct, which compromises its blockage of the plaza flow with a granite effacement to hide its bones. 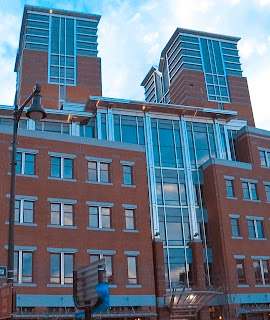 In fact, 60 State Street's dual octagonal form, a deviation from CBS's rectangular block, does make it look like a pair of ventilation ducts from a distance — with none of the sculptural distinction of the Central Artery's real vents, such as the Haymarket Parking Garage and Vent Building at right. Both buildings belie their functions. The Vent Building masks its grimy utility as twin towers with the monumental soar of eagle wingspreads and the brick town house/town hall vernacular of colonial Boston. However, 60 State Street ends up looking less monumental, more dully utilitarian than Saarinen's goals for the CBS Building, owing to the former's confused mumbo-jumbo of disparate influences and site-mandated compromises, not to mention the inimitability of its innovative precursor.