The first two answers should be obvious, if New York City's Empire State Building pops out at you with the iconic familiarity accorded to it by picture postcards, souvenir statuettes and King Kong kinophiles.

But the third might have been equally evident had it not been reduced to its bare-bones entry arch when razed in 1991 for an already-scrapped superhighway project. Skeletal scrap-iron doth not a pictorial image of harbor history make as well as a complete ship terminal jutting across the jetty in full form, decked out in decorative detail, evoking the elegance of turn-of-the-20th-century transatlantic travel with a hands-across-the-water gesture of welcome into port and shelter from the stormy seas.

Nor does a steel-structured superblock. ArchDaily Architecture News just announced the New York City Council's approval of Young Woo and Associates' plans to revamp Pier 57, 54's 1952 peer down the block, into a public market, auction and art exhibit space, a rooftop garden for the TriBeCa Film Festival, and a string of concept stores and pop-up shops carved out of old metal shipping containers.

True, Pier 57 is significant for its innovative foundation of floating concrete caissons, for which Popular Mechanics deemed it a "SuperPier" in 1954. It also has its place in history as a detention center for protesters against the 2004 Republican National Convention that sent George W. Bush back to the White House. 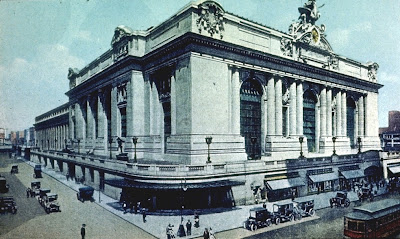 But Pier 57's fame for floating can't compare with Pier 54's association with the sinking of the Titanic, whose 101st anniversary we're celebrating this month, concurrently with the centennial of Grand Central Terminal (left), the magnum opus of Pier 54's original architects, Warren & Wetmore. 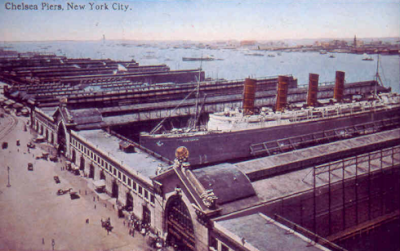 Pier 54 was built three years before Grand Central as one of the Chelsea Piers, a regal row of ship terminals extending along the Hudson River from West 12th to West 23rd streets. The pink granite façades, Roman-arched entrances and ornamented pediments of these stately piers extolled the first-class world-renown of the shipping companies they served. These included the White Star Line, famous for the Titanic, and the Cunard Line, launcher of the Lusitania. 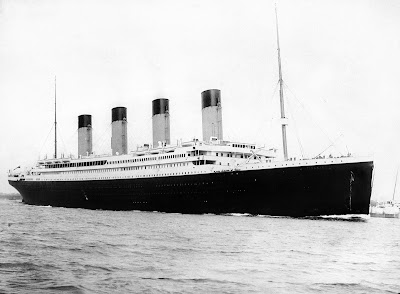 With that the Chelsea Piers did for ships what Grand Central Terminal was to do for trains: enable passengers to enter the city like Roman gods. With pomp and panache, Pier 59 was set to welcome the Titanic to conclude the British passenger liner's maiden voyage on April 10, 1912, from Southampton, England, to New York Harbor. 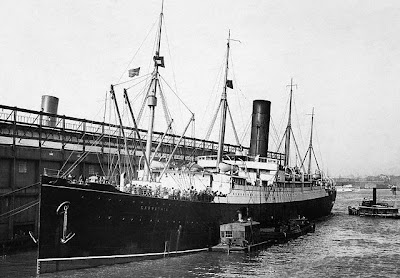 The Carpathia arrived instead, at Pier 54 on April 18, with the 705 survivors she'd rescued after the Titanic sank on April 15. Pier 54's grand hall was made to order for passenger relief given by the Women's Relief Committee, the Travelers Aid Society of New York, the Council of Jewish Women and other charitable organizations. 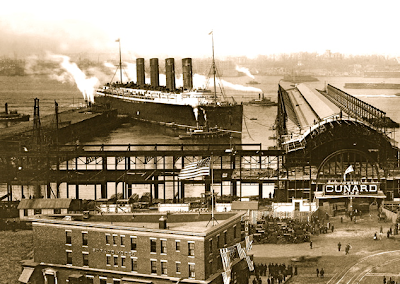 Pier 54 was also a stylish sendoff for the Lusitania on its May 1, 1915 voyage to Liverpool. But the German U-boat torpedoing of the ship off southern Ireland, which claimed 1,198 passenger lives and triggered America's entry into World War I, foreshadowed Pier 54's reduction to the wreckage of its entry arch (right). 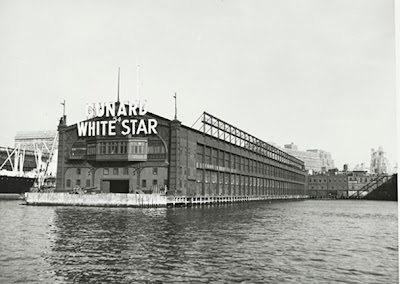 Its fate was actually sealed by a fire that totaled the original pier on May 6, 1932, costing Cunard a million dollars to rebuild. So, to cut corners, pink granite gave way to pressed metal for exterior embellishment — more industrial than palatial in character but retaining the essence of its era's elegance, possibly inspired by... 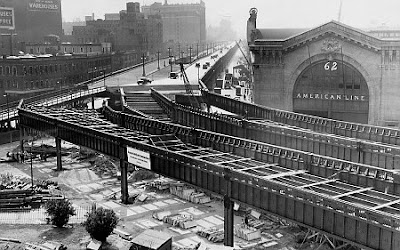 ...the erection of the West Side Elevated Highway along the piers starting in 1929. This superstreet of steel lifted cars up, up and away from the Meatpacking District's congested, narrow lanes, densely packed buildings and populous pushcarts as the fast-lane freeway that commuters craved to get home in a hurry. 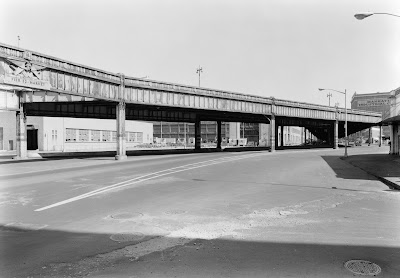 To give car commuters the classic class that greeted ships and trains, the highway sported opulence of its own — metal eagles, lacy rails, winglike finials — expressing the flying-through-the-air feel of the Man of Steel motorists enjoyed up there. This metallic majesty no doubt inspired Pier 54's steely suit of armor. 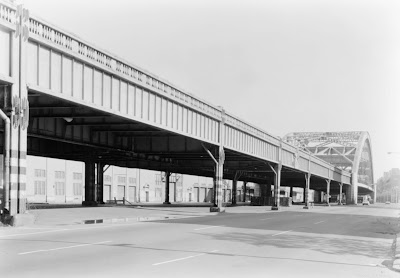 Superman's single-bound leap was aptly articulated in the parabolic superstructure of the highway's Canal Street Bridge, which dignified drivers with the grand-arch grandeur of Grand Central and Pier 54 when it opened in 1939. The bridge was built to accommodate the Holland Tunnel down under, which could not support bridge columns. 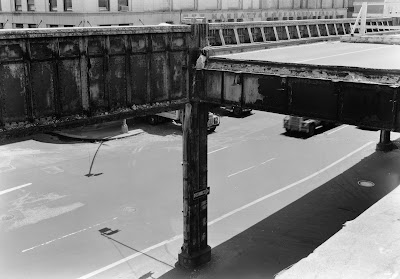 Nor could the West Side Elevated Highway support trucks. A dump truck carrying 10 short tons of asphalt for the highway's maintenance caused the highway to collapse in 1973, finalizing the fate of Pier 54, which was bulldozed in anticipation of the realization of the aborted underground Westway replacement for the Elevated.

Bereft of the body that sank with the ships, Pier 54 looks only slightly more elegant than the Elevated did at its demise. However, a close look at its frieze reveals traces of the merged Cunard White Star Line signage, and Warren & Wetmore's trademark vertical-grilled arch of Chelsea Piers and Grand Central fame does show through. Yet it cries out for something to fill its parking lot of a pier...

...which it once got, when the Nomadic Museum, a temporary "tent" of 148 polychrome steel shipping containers designed by Japanese architect Shigeru Ban, filled it to the brim from March to June 2005 after arriving overseas from Venice. The pier pavilion housed artist Gregory Colbert's multimedia exhibit "Ashes and Snow" (and arguably was a model for Pier 57's pop-up shop plan).

Here's the latest pitch for Pier 54: a sinuous octopus of a park architects Michael Van Valkenburgh and David Rockwell proposed as a feeler-extension of the 550-acre Hudson River Park to make Pier 54 more fit for the free outdoor concerts and movies and annual Gay Pride Dance it haughtily hosted until dilapidation forced its closure to the public last year.

Located within view of the IAC Building of media exec Barry Diller — that '70s showman of Laverne and Shirley, Taxi, Cheers, Saturday Night Fever and Grease fame (need I say more?) — Pier 54 is counting on Diller's dollars ("a $35 million commitment from the Diller Von Furstenberg Family Foundation," quoth the Hudson River Park Trust) to rev up the revamp of Pier 54, which Capital New York estimates will cost $67 million. (Which should be worth it to Diller, if only to prettify his harbor view from his office.)

Yet this webmag also quotes Trust spokesman Stefan Friedman as saying that this is "an extremely out-of-date rendering" that "is not what Pier 54 will look like." Thank heavens. An octopus's garden is a worse tribute to New York Harbor heritage than a piece of a pier that should have been saved, given its titanic place in American history.