Off we go, into the wild blue yonder...

...which is just the message the United States Air Force Academy's Cadet Chapel tries to impart onto the ready-for-takeoff recruit, as the architectural definition of the U.S. Air Force's mission and the defining element of the academy's campus. Challenging our conception of "church," this 1962 modernist military meetinghouse comprises not one but 17 identical spires lined up uniformly like a regiment of recruits, a row of raised rifles, or a fleet of fighter planes "climbing high into the sun," as the official USAF song continues. This architecturally conveys the marching order, the military discipline and the all-as-one alliance the cadets need to carry out the Air Force's mission of defending "our sacred honor" in the air. 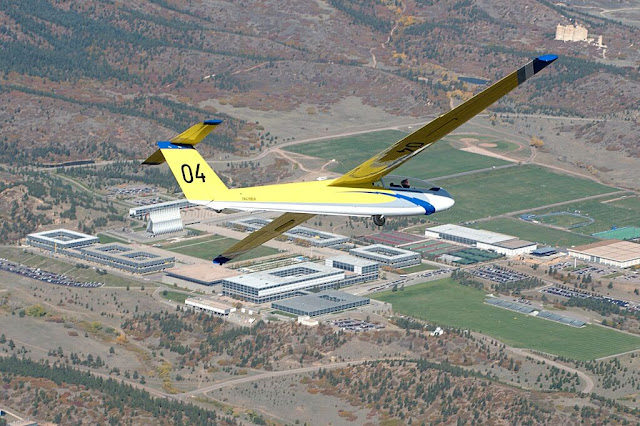 At 150 feet high, the Cadet Chapel articulates the USAF motto "Above All" by towering above all the other buildings — aesthetically and altitudinally — on the bland, boxy 18,000-acre campus (it does look like an airport, doesn't it?), which occupies the east side of the Rampart Range of the Rocky Mountains north of Colorado Springs, 7,258 feet above sea-level. 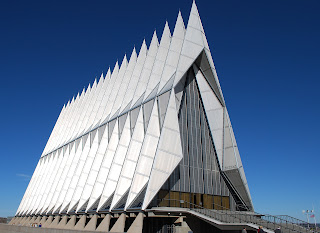 It could also be viewed as a geometric abstraction of the USAF insignia at left, which conveys the sacrosanctity of the Force the cadets are obliged to assume. They experience this effect most fully when they walk up the chapel's steel-railed granite exterior stairway, through its gold-anodized aluminum doors and into its main sanctuary. There, right before their eyes, a new "wild blue yonder" is created for them to contemplate as they look to Heaven for guidance in their flight.

May the Force be with you 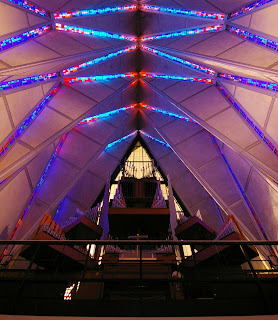 Modeled on Sainte-Chappelle Cathedral in Paris, the Cathedral of Chartres in France and the Basilica of San Francesco d'Assisi in Italy, the Cadet Chapel honors its foreign tradition as well as its flying mission. The cathedral ceiling cascades in a collision of colorful jet-streams (red for flame, blue for sky) while Walter Holtkamp's 4,334-pipe, 83-rank choirloft organ resonates the airs of the Force. The American walnut and African mahogany pews, with their ends carved to recall World War I plane propellers and their backs capped by aluminum strips resembling a fighter aircraft wing's trailing edge, march reverently toward the Italian pietra santa marble chancel inlaid with semi-precious Colorado stones. 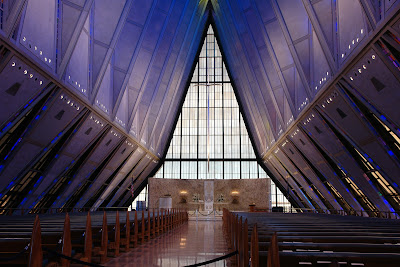 The 46-foot-high aluminum cross hanging before the airplane-hangar glass curtain wall under the roof's apex symbolizes Jesus' resurrection as an inspiration to the flight of the Force. Thus the chapel reinforces Christianity's military connotation, as extolled by Sir Arthur Sullivan:

Onward, Christian soldiers, marching as to war
With the cross of Jesus going on before.
Christ the Royal Master leads against the foe
Forward into battle, see His banners go...

However, this interpretation of Jesus is way off the mark. He is not depicted in the Bible as a warlord, but as "The Prince of Peace" (Isaiah 9:6), as the Sermon on the Mount clearly conveys: "Resist not evil: but whosoever shall smite thee on thy right cheek, turn to him the other also" (Matthew 5:39) and "Love your enemies, bless them that curse you, do good to them that hate you..." (Matthew 5:44) A far cry from the Air Force's "At 'em, boys, give 'er the gun"!

The Cadet Chapel also misses the mark in the area of religious equality, reserving its main sanctuary for Protestant worship and relegating its Catholic and Jewish chapels to down under, with no Muslim mosque to speak of. Yet these spaces have their places in the sun. 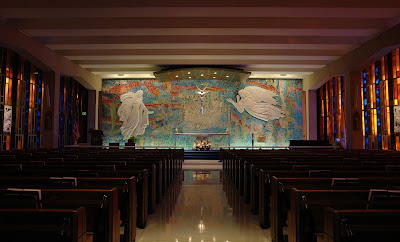 The Catholic Chapel's reredos, a glass mosaic mural by Luman Martin Winter, intermingles turquoise, blue, rose and gray tessera to depict the Firmament of Heaven, as a backdrop to the Annunciation scene set by marble carvings of the Virgin Mary, Archangel Gabriel and a dove.

But these are the wings of peace, not warplanes, in another theological incongruity. The softness of the marble and its curves bring further peace to the atmosphere, giving the cadets one final taste of tranquility before the sharp, pointed wings of war transport them to the heavens.

The Italian white marble altar was given by Cardinal Francis Spellman when he dedicated the Catholic Chapel on September 22, 1963 (precisely two months before a Catholic President's assassination). Along the stained-glass window-walls are the 14 Stations of the Cross, also by Winter, carved from the Carrara marble of the quarries that supplied Michelangelo's stone. The chapel also boasts its own Holtkamp organ. 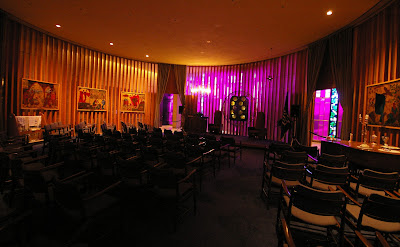 The in-the-round Jewish Chapel reprises the main attraction's glass/solid alternation, this time as a translucent glass-interspersed vertical grill of Israeli cypress stanchions. These are complemented true to heritage with a Jerusalem brownstone floor donated by the Israeli Defense Forces.
The stanchions ebb in color-filtered light from the foyer's purple, green and blue stained-glass window-wall with the verticality and candle-softness of a menorah. The Aron Kodesh shelters the Scrolls of the Torah. The foyer exhibits a Torah Scroll rescued from the Nazis during World War II, discovered in an abandoned Polish warehouse in 1989, and now dedicated to the memory of the academy alumni who fought the Nazis.
The mid-1980s paintings by Shlomo Katz tell a Torah tale along the Air Force-friendly themes of brotherhood, flight and justice, putting the Flight from Egypt in concert with the flight of the Force. But in so doing, like its Protestant patriarch and its Catholic comrade, the Jewish Chapel deviates from the peaceful slant of the old Hebrew proverb "מיהו הגיבור האמיץ ביותר? זה שהופך את אוייבו לידידו" (“Who is the bravest hero? He who turns his enemy into a friend.”)

Yet the Jewish and Catholic chapels are truly more peaceful parishes than the Protestant powerhouse above them — an agreeable tradeoff for their lower rank in the hierarchitecture of the building. The Jewish chapel's circularity, wood-grain warmth and stained-glass serenity, and the soft curves of the Catholic chapel's marble and mosaic masterworks, contrast sharply with the Protestant chapel's winglike knife-edge aluminum diagonals, which hover over the worshipers as an eagle-eye reminder that they're always under the wing of the Air Force. Conversely, the lower chapels provide parishioners with peaceful sanctuaries for personal prayer before the planes beckon them hither and yon.
Air Gardens 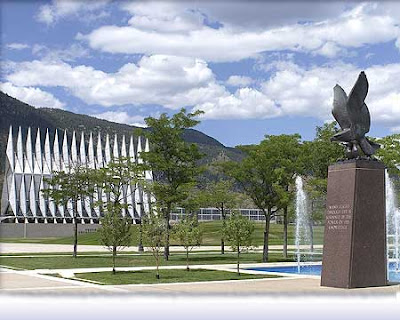 Overall, the spear-like spires of the Cadet Chapel do make peace with their surroundings when the Air Gardens give them the sculptural presence of public art in a park. Designed by landscape architect Dan Kiley, the Air Gardens comprises 700 feet of ornamental trees, grassy greens, lighted pools, spouting fountains and labyrinthine lanes. At the south end of the Air Gardens is a piece of real public art, the Eagle and Fledglings Statue, inscribed on its granite base with a quotation by Austin Dusty Miller, "Man's flight through life is sustained by the power of his knowledge." 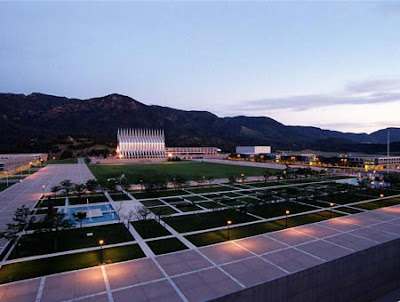 The Air Gardens are the east quarter of the Terrazzo, the Cadet Area's Italian-inspired piazza of terrazzo-tiled walkways set in a rectangular grid of marble strips. This level, orderly, regimented landscape contrasts the rugged randomness of the Rockies with the geometric precision of airport runways and Air Force drill formations. 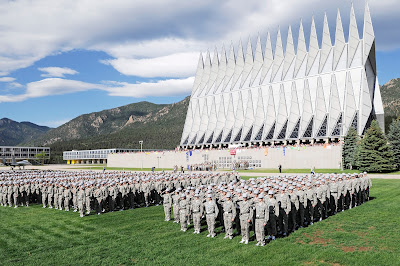 The U.S. Air Force Academy's Cadet Honor Code, "We will not lie, steal, or cheat, nor tolerate among us anyone who does" (taken here as an oath before the Cadet Chapel's Class Wall bearing the crests of the graduating classes), certainly comes out in full force in the architecture of the Cadet Chapel.

It does not lie about its function —  its multiple spires make that crystal-clear multiple times — or its structure — its exterior articulates its interior and vice versa, through the transcendent use of clear aluminum triangular paneling inward and outward. It does steal the spotlight on the campus, but, like the steepled church of the colonial village, is privileged to stand out (and up) as its spiritual center without robbing the surrounding structures of their significance to the community. It does not cheat in its ecclesiastical duty, eschewing a typical church's visual distractions of ornamentation and decoration in favor of a bare-bones, plain-skinned directness in a Cadet's communion with God.

Above all, the Cadet Chapel stands its ground in a bold expression of the terra firma of its stature and the fortitude of the fleet it symbolizes, as the official USAF song expresses at the end: "Nothing'll stop the U.S. Air Force!"