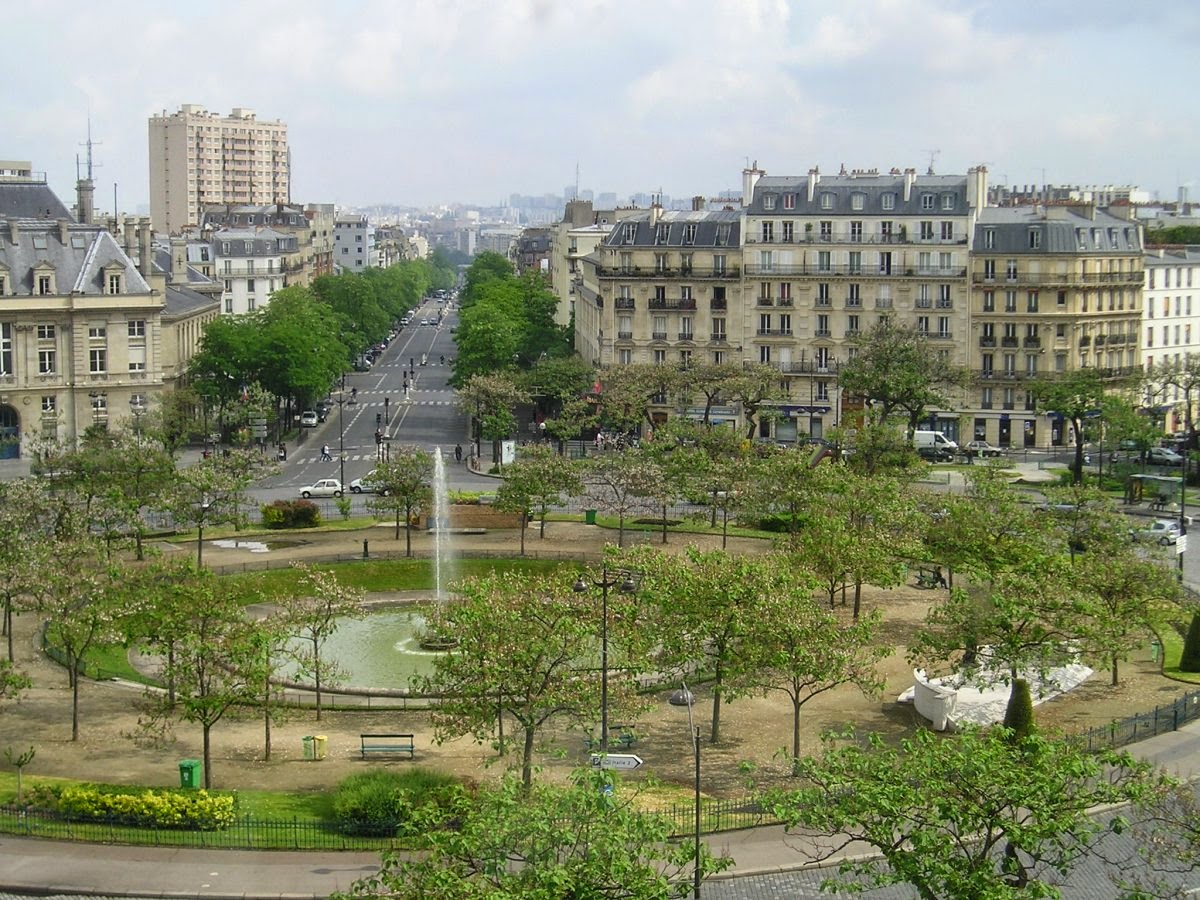 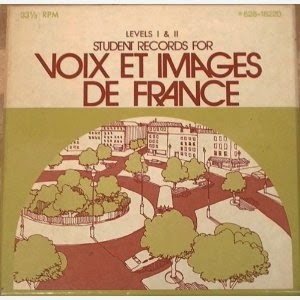 If you're a Baby-Boomer or Gen-Xer who, like yours truly, had l'honneur of learning French through the pre-digital filmstrips, reel-tapes and records of Voix et Images de France, you'd answer 'oui' to all of the above. For this then-nouveau, now-passé audio-visual learning tool made Dix Place d'Italie (10 Italy Square) one of Paris's most flocked-to sites for students eager to meet and greet their beloved ingénieur en costume noir, Monsieur Thibaut... 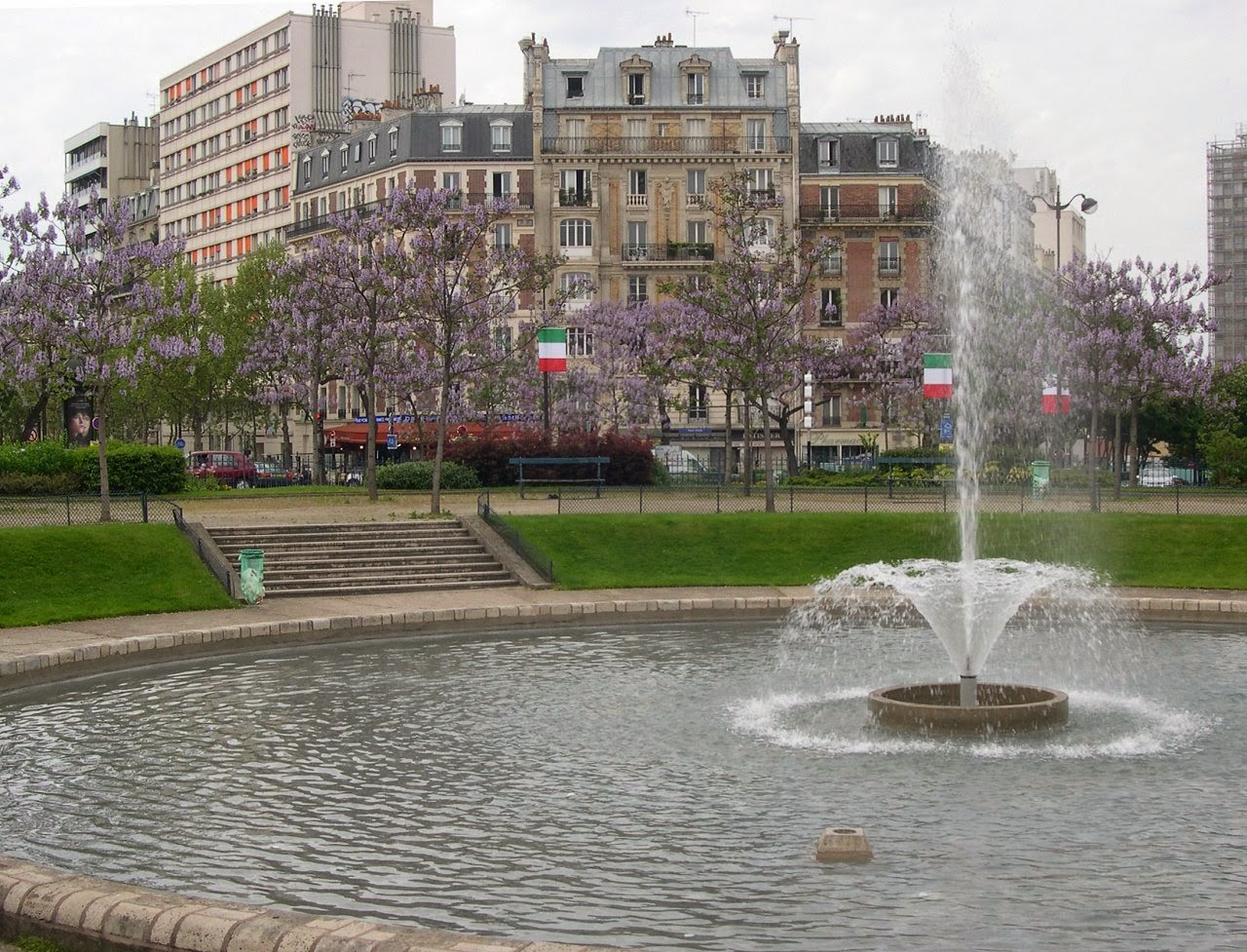 ...only to find him fictitious, and his maison the same. For the real Dix Place d'Italie looks nothing like the plain five-story box (or four-story [quatre étages], as the French don't count the lobby, le rez-de-chaussée, as an actual étage) in Leçon 2: La Maison of the filmstrip.

Instead, No. 10 is a distinctive seven-story (including the living space in its mansard roof, which the French do count as an étage) sandstone-limestone mélange of Art Nouveau and French Second Empire, punctuated by French windows, French balconies and bay windows, and bookended by brick English Jacobean-Second Empire hybrids angling obtusely with l'Avenue de la Soeur Rosalie (called La Rue de la Gare in the lesson) à droite (at right), and le Boulevard Auguste Blanqui, à gauche (at left). 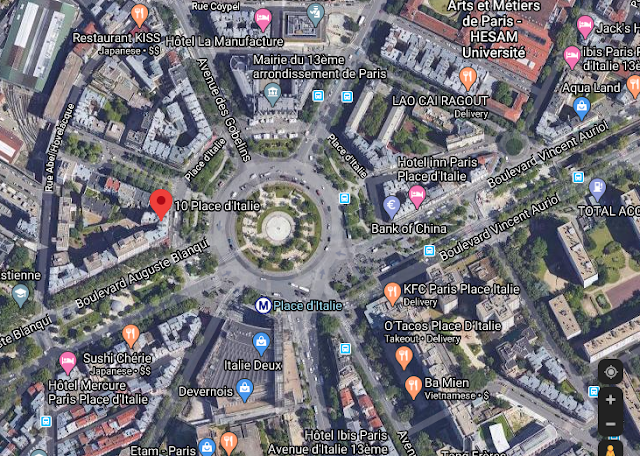 
Between 1853 and 1870, under the direction of Emperor Napoléon III, Haussmann redesigned the city as a geometric network of wide streets and tree-lined boulevards of upscale residential/retail blocks of Second Empire, Jacobean, Beaux-Arts and Art Nouveau architecture of mostly Lutetian limestone and brick, radiating from circular traffic islands that offered parks, fountains and monuments to le nouveau riche de Paris, as a beautiful alternative to the narrow, squalid, disease-ridden streets of medieval Paris where Victor Hugo's Les Misérables took place. Named after the nearby Avenue d'Italie, Place d'Italie was built beginning in 1860 on the site of the Wall of the Ferme Générale (Farmers General), built c.1780 as a means of collecting internal revenue for Paris in the form of indirect taxation. In Leçon 2, le rez-de-chaussée de la maison de M. Thibaut is described as follows: "En bas, il y a deux magasins" ("Below, there are two stores"). In the lesson these are la pharmacie et l'épicerie (the drugstore and the grocery store). In reality, la pharmacie is there—albeit next door—though No. 10 itself has some sort of café. (But who knows what's there now, in the wake of COVID-19—though I'm sure la pharmacie reste là, since it's needed more than ever.) 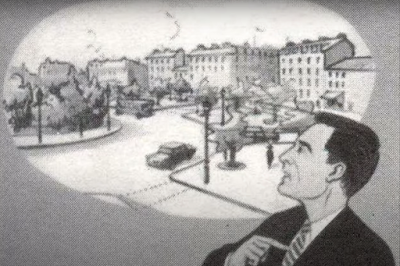 But la Place d'Italie as a whole is far from the intimately idyllic human-scaled village M. Thibaut depicted it as when he said, "J'habite Place d'Italie à Paris" ("I live in Italy Square in Paris") in Leçon 1: Présentation ("Voilà Monsieur Thibaut" on YouTube). Soon after Voix et Images was made (1961-62), the square's neighborhood of le XIIIe arrondissement was targeted for the Italie 13 urban renewal project of modern skyscrapers, partially modeled on Le Corbusier's unrealized Ville Radieuse (Radiant City) scheme of cruciform towers in a grid of boulevards and greenspaces. Public opposition halted this proposal, but la Place d'Italie bears the scars of this destructive initiative, most notably... 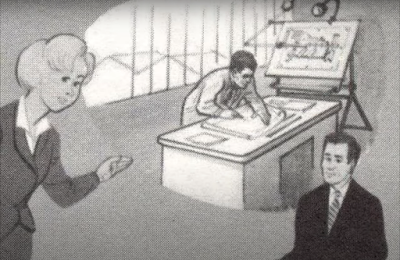 Of course, at the end of Leçon 1 we learned that "Monsieur Thibaut est ingénieur" ("Mr. Thibaut is an engineer"), and the propensity for modern design he demonstrated in this image may well have foreshadowed what would become of his Place précieuse a few years hence.

Notice the roof gables outside his office, behind its modern ribbon-window—symbolic of how the midcentury modernism he was engineering was about to supplant some of the old Parisian architecture of his Place.

Luckily, one example of that survives: la Mairie (City Hall) du XIIIe Arrondissement, built 1866-1877 from a Second Empire/Baroque Revival design by Paul-Émile Bonnet (1828-1881) as one of 20 mairies built in all arrondissements by Napoléon III. Its grandeur châteauesque has made it a popular wedding venue...

...especially when lilacs bloom from the pawlonia trees of Jardin Françoise-Giroud in the park, enhancing the building's baroque beauty and restoring a corner of la Place d'Italie to a semblance of its Napoleonic nascence. It does seem like a different 'place' from different vantage points, ranging from historique to haute moderne and antique to avant-garde.