A court of honor

As my school bus meandered through Boston's South End to alight a student in one of its archetypal residential squares, the Victorian architecture riveted me to the window away from my rowdy schoolmates, which often provoked their spiteful derision of me. Yet I remained transfixed by the area's striking resemblance to my Beacon Hill neighborhood as its brick bowfronts, scrolled ironwork, ornate porches and deep cornices trumpeted its potential as a desirable—if not necessarily affordable—place to live someday. 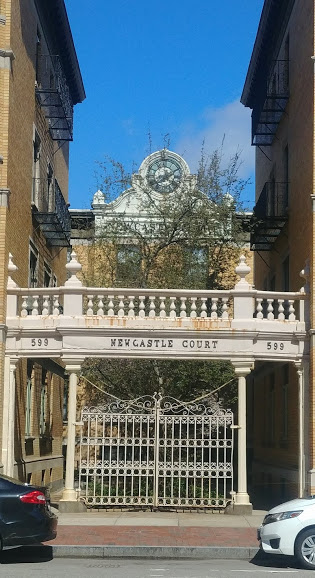 A development that fit both bills piqued my special interest for its solemn center-court entrance with lavish iron gate, classical balustrade, Grecian urns, Roman clock parapet, and classic block lettering that proclaimed its name over the gate and under the clock: NEWCASTLE COURT. The bay windows bookending the gateway refined the complex as a stately residence and close-knit enclave, while the sheer opulence of the gate and the clock left me guessing how old this building was.

Built in 1905, Newcastle Court at 599 Columbus Ave. picks up many of the architectural elements of its more upscale South End and Back Bay models, including bay windows with diamond and stained-glass panes, heavy cornices with modillions and fleur-de-lis reliefs, oriel windows, and opulent ironwork. Yet its yellow brick, cast-stone trim and simplified side-window balconies suggest its affordability as well as its turn-of-the-20th-century construction era.

As does its extended rear elevation, which occupies almost its entire side-street block, signifying its developers' intent to build it as an affordable multifamily residential complex. The pressed-metal oriel side windows elegantly extend some interiors into comfortable living spaces akin to those of wealthier South End and Back Bay dwellers. In so doing, these oriels form an architectural dialogue with that of the older red-brick building across the side-street, as a "good neighbor" gesture that welcomes lower-income people into an upper-scale neighborhood. 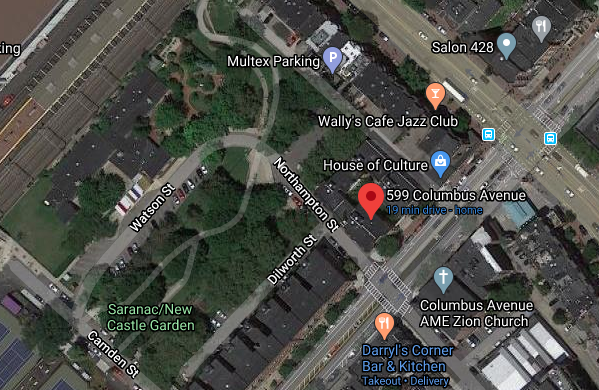 Of course, the rear extension denies Newcastle Court residents the private "hidden gardens" of the South End and Beacon Hill. But in exchange they get generous recreational acreage from the Southwest Corridor Park as it snakes through their "back yard." They also get a South End rarity: a green carpet welcoming them home. 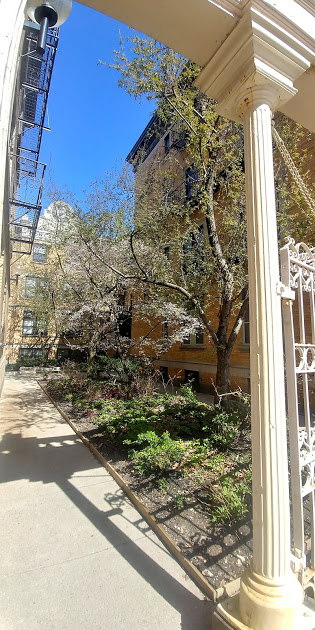 The classical delicacy of the gateway's fluted columns and iron scrolls foretells the elegance of the space it introduces. The tenants are escorted out and welcomed home by a garden that forms a pastoral oasis from city clamor and a dignified approach to the units, in the vein of the aforementioned residential square with a central park, but this time without the cars, and with a park they can call their own.

The trees and shrubbery enrich the entry experience beyond just unlocking the door from the street. They make it into a rustic rite of passage homeward, which climaxes with the mighty timepiece signifying suppertime in the vein of vintage European public clocks such as the Paris-Orléans clock on Paris's Gare d'Orsay (1900, Victor Laloux, Lucien Magne and Émile Bénard), now the Musée d'Orsay.

This "common ground" and watchful clocktower symbolize the Newcastle Court community itself, as 30-year resident Patricia Rogers reported to the Office of Boston Mayor Martin J. Walsh on the building's August 19, 2019 rededication: "This building is in at a convenient location, but the best part of living here is my neighbors. We look out for each other. I want to thank the Mayor, Fenway CDC and all of the people here today for helping us stay in our homes." 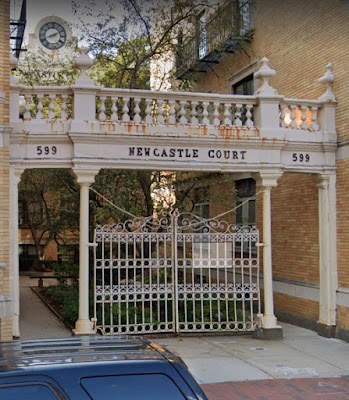 The Fenway Community Development Corporation and its development partner, The Schochet Companies of Braintree, Massachusetts, did just that by acquiring the 97-unit block to preserve it as the affordable housing community its original developers intended it to be.

Now known as the Newcastle/ Saranac Apartments, it not only welcomes low- and moderate-income tenants home with European gentility but also guards them from the eviction they would have faced had they not spoken up, as six-year resident Kim Wilson put it at the rededication ceremony:

"Before I moved in, I always said that this place was great because it was across the street from my church [and] I love the park that you have here. I used to come out here on Friday nights before choir practice and sit out in the park...and say hi to the people who came in the building. The walk pathways, the stores and services around here, and just how everybody used to come and just sit here in the parks...down here in the Northeastern area and just see the kids play, that really impressed me.

"After living here for a short period of time, I heard from one of my fellow tenants the rumor that was going around the building that it was going to be sold. Knowing this was the City of Boston, I figured that the building would be turned into college dormitories for Northeastern, or luxury apartments.

"I was impressed that the owner...came all the way from Florida to speak to us. He...had the City of Boston there to...tell us that they were going to keep this area affordable for us... During this meeting we had a voice. We expressed how we felt, that we were going to be at the table through this whole entire process to keep where we lived affordable... We also rallied by...speaking out at the State House...for funding for affordable housing, because...if we don’t do it, it’s not going to get done.

"And we’re just working people trying to make a living for ourselves and keep a roof over our heads. All the members of the tenant association are people that care about what happens to our lives and what happens here in this area, in our apartments. And we’re all here to improve the capacity and the quality of life for us. We are all thankful that the building has been preserved as affordable and no one has to move out." (https://www.youtube.com/watch?v=TSxwP5NEBcw)

This makes Newcastle Court both a court of honor and a bastion of hope for living affordably but nobly in the South End—just as I had envisioned it as an onlooker from my school-bus window.