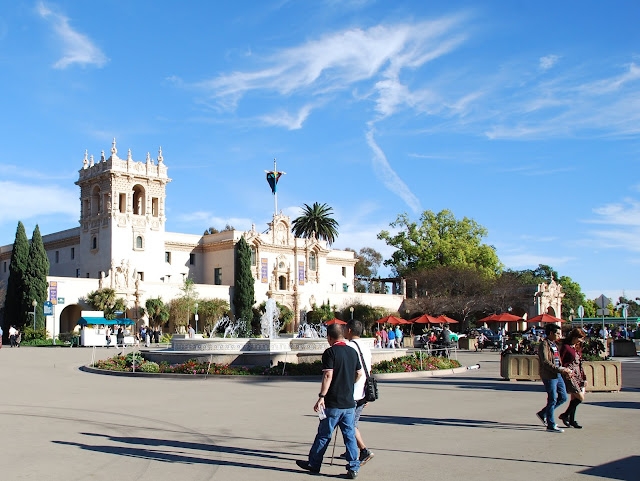 The elaborate Spanish temple edifice of San Diego’s Balboa Park Visitor Center (now closed due to the COVID-19 pandemic, but worthy of inclusion on your travel bucket list once the lockdown lifts) tells many tales: of world and city history, of conquest, of endurance through time and tempest, of hope for a better future, of determination to preserve the past, and of Balboa Park’s rich cultural offerings today. 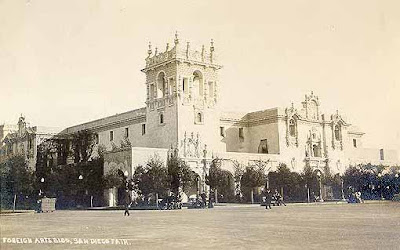 First called the Foreign Arts Building, it was one of many Spanish Colonial and Mission style buildings erected in Balboa Park for the 1915 Panama-California Exposition celebrating the 1914 opening of the Panama Canal and promoting San Diego as a first US port of call for northbound ships that navigated the canal.


This was a legacy of Spanish conquistador Vasco Núñez de Balboa crossing Panama to the Pacific Ocean (then the South Sea) in 1513 and paving the way for Spanish explorers and settlers along California’s coast — particularly Sebastián Vizcaíno, who mapped the coast in 1602 and named the San Diego area for Catholic Saint Didacus (after Vizcaino’s flagship San Diego); and Father Junípero Serra, who in 1769 founded the Franciscan mission of San Diego de Alcalá that initiated the city.

“Here is pictured in this happy combination of splendid temples, the story of the friars, the thrilling tale of the pioneers, the orderly conquest of commerce, coupled with the hopes of an El Dorado where life can expand in this fragrant land of opportunity,” said G. Aubrey Davidson, president of the Panama-California Exposition Corporation, at the January 1 opening of the Exposition. “It is indeed a permanent city, and every building fits into the picture.”

Most, including the Foreign Arts Building, were actually built as temporary structures of wood-framed “staff,” a blend of plaster and burlap-like fiber, to house exhibits on artistic, scientific, agricultural, commercial, national and international themes.

Inspired by the 16th-century Hospital of Santa Cruz (now the Museum of Santa Cruz) in Toledo, Spain (left), architect Carleton Monroe Winslow designed the Foreign Arts Building with an ornate façade (right), a ground-level arcade, and the finial-topped bell tower seen in the images above. The building exhibited Italian and Russian arts and crafts, and Chinese and Japanese goods.

When the building housed a natural history museum in 1920-22, its structural weaknesses showed. However, merchant and philanthropist George White Marston, the Exposition’s Buildings and Grounds Committee chairman, called for preservation of as many Panama-California Exposition buildings as possible for their historical beauty, having visited Spain and romanticized its architecture. Thus most of them were revamped for the 1935 California-Pacific International Exposition.

During World War II the U.S. Navy occupied the House of Hospitality as just that: a nurse-staffed hospital as a U.S. Naval Training Center. Following years of decay, patchups and falling ornaments, the building, along with most other Exposition structures, was replicated in earthquake-resistant glass-fiber-reinforced-concrete in 1997 as the Balboa Park Visitor Center.

Today the Balboa Park Visitor Center continues to be the beacon of beauty it provided for the two Expositions it became a recognizable icon of, this time informationally as well as architecturally.

The Center provides the skinny on all of Balboa’s family-friendly events, exhibits and recreational opportunities. For starters: the anthropological Museum of Man in the first Exposition’s California State Building; theater at the Old Globe, the second Exposition’s replica of Shakespeare’s Globe Theatre; concerts in the Spreckels Organ Pavilion (with the world’s largest outdoor pipe organ); art, science and model railroad museums; sports facilities; the Botanical Building; picturesque gardens; the San Diego Zoo; and, above all, the El Dorado envisioned by expeditions and expositions.

A Balboa bonanza, for sure!