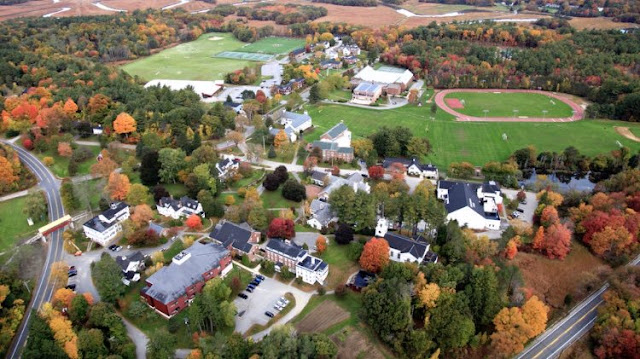 My choir's next summer camp, by special arrangement with The Governor's Academy in Byfield, Massachusetts (then called Governor Dummer Academy—the reason for the rechristening needs no gloss), gave us not only the independence we needed to manifest our choral ascension, but also a quaint, well-manicured New England village to revel in for a few weeks. 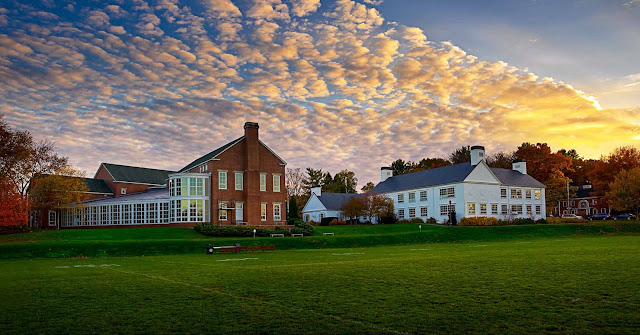 Chosen for its five-mile proximity to our conductor Thomas Murray's home in Newburyport, the Academy replaced the rustic ramble of Trinity Church Camp and the army-barracks arrangement of Camp Duncan with the exurban elitism of the North Shore. Trinity's building-to-building trek heedless of the wind and weather remained, but was elevated to a more erudite level, as if we were going to a glitterati boarding school rather than a ramshackle summer camp. And, to a degree, we were. The refinement of the architecture reflected the sophistication of our music education under Mr. Murray's organ digits and drill-sergeant chops.

The campus encompassed every Georgian/Colonial style and feature imaginable—roof gable, sash window, oculus, cornice, fieldstone, brickwork, clapboard—all artfully applied through the ages since the Academy's founding in 1763 at Gov. William Dummer's bequest with the erection of the Little Red Schoolhouse. (This, by the way, is a 1938 reconstruction by William Graves Perry, architect of the Colonial Williamsburg restoration. And how fitting, given the Academy's predilection for the past in most of its architecture.)

This is the Cottage (unfortunately razed in 1997 for a math/science complex), our sleeping quarters, giving our chambers Cape-Colonial suburban domesticity with its high-pitched gambrel, pedimented porch, and dignified dormers. Our rooms, too, were a far cry from Trinity's graffiti-begrimed bunks, being as squeaky-clean as well-kempt motel lodgings—provided, of course, that we aced inspection. 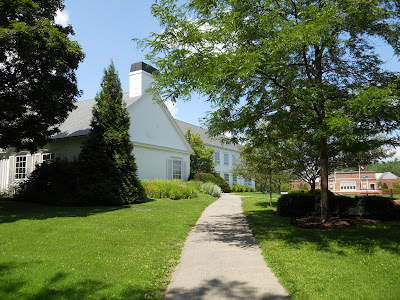 This path led to our dining hall. As its colonial propriety suggests, it was a cut above Trinity's pine-plank mess hall in refinement—in setting, if not bill of fare, save for our end-of-summer banquet, when a debate over steak vs. fried clams as our parting repast heated up the hall. (I chose steak, amid boos from the clamdigger crowd. It was an even split, until Counselor Donny cast the tiebreaker: "Steak.")

The neocolonial Brahminism also reflected the refined musical tastes going into Mr. Murray's choral selections, including:
The rest elude me, but this brought our pops tour era to a full finis, save for a few "fun" numbers he threw in to keep a smattering of the Bretton Woods spirit alive:
And our concert-tour radius was as restricted as our repertoire, confined to churches in North Shore towns such as Newburyport and Rockport.

Yes, the landlocked hill-and-dale arboriculture and craggy escarpments of the White Mountains of New Hampshire gave way to the salt-sea sparkle and rocky shorelines of the North Shore of Massachusetts, while ritzy resorts yielded to pearly-white historic churches as concert venues, reflected in our almost-all-sacred songfest.


Our concert engagement in Rockport later took us on a tour of the town's intimate narrow lanes of gabled, Cape-shingled cottages to what was my musical peak experience that summer. In one of those lowly lodges, a girl sang Erlkönig ("The Erl-King") by Franz Schubert and Johann Wolfgang von Goethe more radiantly than I'd been led to expect by her rumpled T-shirt and shorts, which were almost as ill-kempt as the house's weathered facade. Yet that song proved to be more of a challenge to the accompanist, who stumbled through the piano part's rapid triplets while the singer's radiant mezzo-soprano glided effortlessly through the ether. A very memorable way to transcend the rugged (architecture, clothing, keyboard musicianship) to achieve the sublime in song. 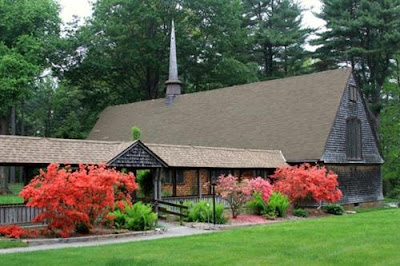 We ourselves did that in a concert at Adelynrood Retreat and Conference Center in Byfield, a marriage of Cape, Craftsman, Medieval Revival and Shingle styles that elevated the rusticity and simplicity of Rockport's cottages to a lofty ecclesiastical level in a way that was simultaneously homey and high-church. 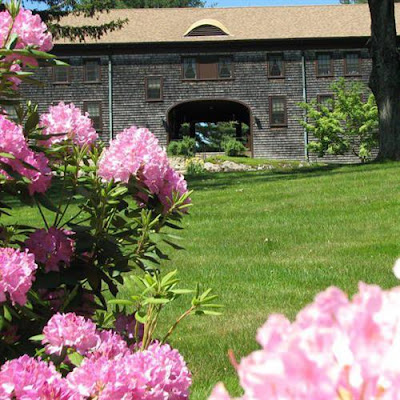 Which was what the Society of the Companions of the Holy Cross presumably intended when they founded Adelynrood (combining namesake Adelyn Howard's name with "rood," meaning "cross") in 1915 for their confirmation of their faith in Christ and their application of it to such pressing world issues as race and labor relations, poverty, justice for immigrants, environmentalism, and abolition of the death penalty. 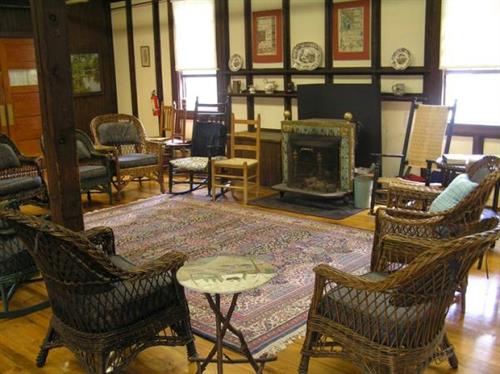 This living-room setting, cozied by half-timbering and exposed rafters for a medieval fireside effect, provided an intimate atmosphere for our concert.

So my summers of '75 and '76 were adventures in architecture more than music, in line with Mr. Murray's vision for an eruditely cultured society. He orchestrated our odyssey according to his personal tastes in music and design, with as few kowtows to the mainstream as he could get away with. Which was the polar opposite of the roughing it I was in for in my final camp in the summer of '77—the Yawgoog Scout Reservation in Rockville, Rhode Island.