A gondola in Boston?

The very idea of a gondola coming to Boston's Seaport District terrifies me, even though I've ridden them before, in Switzerland long ago, and in New York, when I took the Roosevelt Island Tramway and emerged on the isle and back on the main one without a scratch, owing to the city's repute as "a tribute to the American engineer," in Frank Lloyd Wright's words.

But the late Toni Morrison's notion, "If you surrendered to the air, you could ride it" does mitigate the fear of the cable snapping without notice, of a train suddenly jumping the rail, or of an airplane falling under a terrorist's jurisdiction and careening into a skyscraper. Of course, you do surrender to the air big-time in an aircraft when you let go of your heebie-jeebies and trust the plane to the man (or woman) who wears the wings once its enveloping enclosure and the cushion-comfiness of your recliner convince you of your safety. 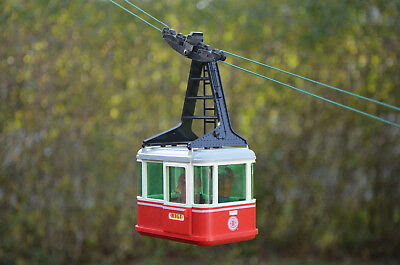 Which was one reason why gondolas have fascinated me since my cousin Teddy brought me this toy cable-car as a souvenir of his then-hometown of Garmisch-Partenkirchen, Bavaria, Germany. Since that's a ski resort, gondolas are mainstream there, as solidly enclosed alternatives to the precariousness of T-bar chairlifts. 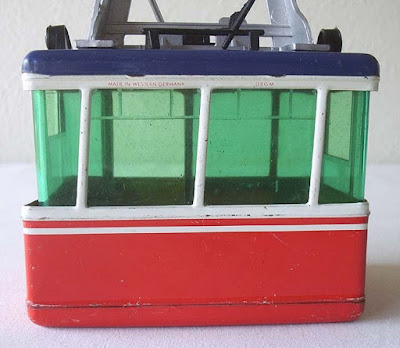 And the roominess of the Rigi cable-car captivated me as well. I'd peer in, eye it all around from its mopboarded floor to its oversized tinted windows to its ceiling-light fixture (actually an attachment screw for its rig), and exclaim, "Hey, it's great in there!" as if I were wishing to soar above the mountains or cityscapes and gawk at the doll-like delights below while safe in the metallic armor of my "room," just like in a plane.
Yet somehow a gondola in Boston doesn't feel quite right to me. And I don't think it would be welcome here, perhaps regarded as a reincarnation of the Orange Line El that ran through Charlestown, the South End and Roxbury and the Green Line El along Causeway Street (and don't forget the Central Artery), giving us vertigo, airsickness, barf-bag hankerings, or similar fear-of-flying conditions, until we breathed sighs of relief that the elevated railways were cut down, opening the skies to the city once again. So Boston's Els are not missed at all today, because of the horrendous urban blight their underbellies caused underneath, and because a sky-train would be as unthinkable a place for a derailment to occur as the Seaport's Fort Point Channel waters would be an unimaginable location for a gondola to snap a cable or stall in midair, with as much of a "way out" as Flight 93 on 9/11 had.


So why would a gondola fly, if an el doesn't anymore?
And riding the Orange Line El to my ninth-grade Work/Study at Brookline's Museum of Transportation was hair-raising enough for me. There being no guard rail on the track until we arrived at the relief of each station enclosure, I was frightened that it could jump the rail without a moment's notice (no wonder it always slowed down before lurching the track-curve that led it into the old Dudley Square Station). Of course, the only way for me to keep my sanity up there in the air was to surrender to it—and, yes, I could ride it, bolstered by the assurance that no derailment had occurred on that line since around 1914...

...as well as the reassuring structure of Dudley Station itself, providing temporarily safe-and-sound housing for the passengers as they disembarked in the slate-roofed, copper-clad cast-iron shelters before the train took to the guardrail-less rails again, pushing us back into paranoid look-out-below mode, forcing us to erect our prayer-palms, finger our rosaries, and swish the sign of the cross across our thoraces until the safety and security of the subway brought us our salvation.
Want a gondola now, Bostonians?