This, of course, meant more nature to trudge through rain or shine for meals, chapel, assemblies, Canteen purchases, the bathroom [tagged "the Buglights" for special orange lightbulbs that attracted vermin away from the latrines], the evening outdoor prayer, and—ugh—visits to Nurse Dirty Gerty (so monikered for her persnicketiness about cleanliness) at the infirmary to treat that sunburn that singed you on the beach trip because somebody'd copped your Coppertone.

But all buildings were uniform in their rudimentary Craftsman construction for optimum sturdiness, simplicity and sincerity: exposed rafters to emphasize the roof structure, shiplap or clapboard siding to use wood to best sealant advantage, exposed knotty-pine interiors to celebrate the source of the building materials. Yes, unlike the grandiose resort hotels us Bretton Woods Boy Singers sang at the previous summer, architecture did not upstage nature at Trinity Church Camp, but deferred to it in its restraint, bringing us closer to nature's nurturing and healing powers.

The cabins, sporting hipped roofs with projecting eaves to shelter the screened, unglazed windows from rain and sun, housed 8-10 boys each and were nature-named. Mine was the Owl, left rear. Others included the Beaver, the Panther, the Wolf, the Loon, the Hawk... 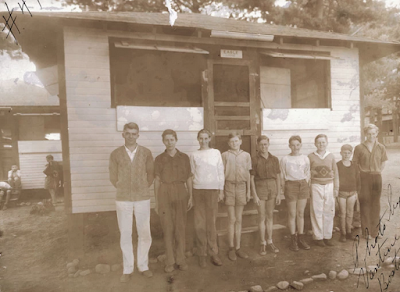 ...and the Eagle—though that was not the equivalent of an Eagle Scout in rank and merit, especially not during morning inspection: the Loon always took top honors, until the Beaver beat them by applying more of the lodge-building industry of their namesake water-rodent to their spic-and-spanning.

But what no bird or beast could scrub away was, as these images suggest, the graffiti that slathered the walls and bunkbeds with memes of Trinitarians eager to ink, pencil, carve or spraypaint their names and years in the annals of camp lore and yore, sometimes unwillingly: "Keith Cook wet this mattress, July 27-August 10, 1974." (So much for the Buglights.)

And how inconsistent this was with the clean "white knight" image our evening camp song (sung to the tune of O Tannenbaum) tried to instill in our young minds, as a supplement to Dirty Gerty:


Galahad our patriot knight,
Shown in spotless armor bright
So that we who bear his name
Guard our lives from blot or blame
And raise the voice of manly praise,
Of knightly deeds and ancient days,
And pledge we now ourselves to be
True knights in Christian chivalry.

At least the graffiti and the knotty pine shared a common trait: the primitive design anarchy of nature and boyhood.

But that didn't mean, as this image also conveys, that we were entirely bereft of modern perks. Each cabin had a single lightbulb—which, in the Owl, happened to hover over my bunk, setting me up for mockery when it flickered on and off to signal Lights Out: "Todd, stop fooling with the lights!" 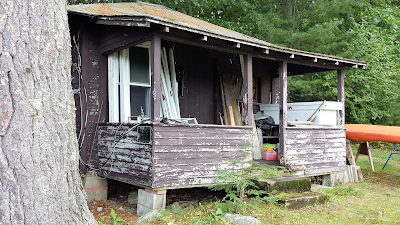 This may be the old Aardvark cabin, where senior campers and counselors-in-training resided, closer to the central fields to keep full vigil on the juniors. The simple, functional framework still stands out, the porch being the next step of luxury befitting the elders. 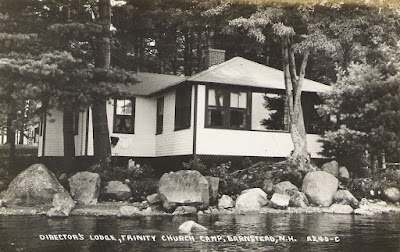 Here was the camp's highest level of luxury: the Director's Lodge, boasting a full-house treatment of double-hung windows, flood-resistant foundations, and that gleaming hardwood floor, throw-rug, comfy chair and stone fireplace I greened with envy for whenever I peered inside. The trouble was, at Camp Duncan the previous year we all got a piece of that echelon of comfort. Now the grownups got it all, while we rank-and-filers had to rough it all the way. 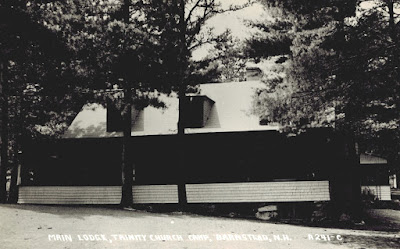 Speaking of which, when our PA system boomed, "All campers and staff please report to the Knoll," we eagerly ranked-and-filed in line to get into the Dining Hall, whose level horizontality counterbalanced the Knoll's slope to reassure us of the nourishment that would keep us level-headed... 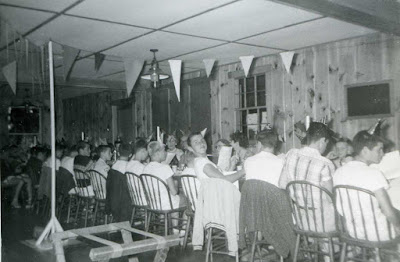 ...except when a food-flinging got us sent to the flagpole in time to miss dessert. The Dining Hall's knotty-pine paneling expressed the camp's roughing-it spirit, contrasted with the elegance of generations of swimming award plaques—which I didn't have a shot at, in light of a counselor's comment, "That crawl needs a lot of work!" 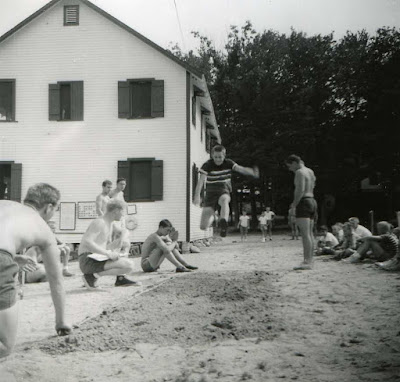 I did, however, win laurels on Tournament Day, acing a broad-jumping contest on the sandy strip by the Boat House. (I also won aqua-shuffling—running into the lake, touching the dock, dashing back to shore—and came in second in a relay race.) The Boat House, the kickstart of all Bow Lake boatings and the changing quarters for our daily swims (and rare skinny-dips), ranked second in domestic dignity to the Director's Lodge.

But the Boat House's classic New England shutters, gable, clapboards and bracket-like rafters left greenhorn campers clueless about what went on inside if you went up to the Counselors' Room without prior authorization: you got a Pink Belly. They'd pin your arms and legs to the floor, lift up your shirt-front, slap your belly until it reddened, and rub Ben-Gay on it to erase the pain. This was most embarrassing when you went to your swims or Buglights showers all red on your midriff, a telltale sign of your camp rules infraction. And if you went up there a second time without a pass, you'd get a PBW: a Pink Belly followed by a Wedgie. (But those mortifications were minuscule compared to my turning red when a kid pitched my skivvies out onto the Boat House's launching ramp and I ran out there in my birthday suit to fetch them, becoming an instant target of derisive cackles from the campers.) 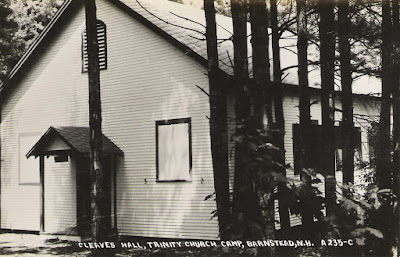 The building that best détented our discords under the towering trees of Trinity was Cleaves Hall. Its country-church charm recalled many regional styles: Puritan, Quaker, Shaker, Craftsman, and even Contemporary, owing to the open-concept auditorium-stage space its façade expressed and its rafter framework created.
It looked roughly like this inside. Knotty pine predominated here as well, now symbolizing the unpredictable fun and variety of the talent shows, which ranged from magic acts to comedy sketches to a piano performance of Ernest Gold's theme from Exodus to a lip-sync of Sha Na Na's remake of the Earls' "Remember Then" by Dean Buckley and the Greasers...

...to recorder renderings by Yours Truly, which I reprised at our St. Paul's Choir concert here. Yes, to counterbalance the clown shows, we gave our sole concert at Cleaves. Our repertoire reprised "Think Summer" (made famous by Roy Clark and written by Paul Evans and Paul Parnes of "Happiness Is" one-hit-wonder fame) and several sacred numbers including Christmas carols (yes, in the summertime), due to the more classically refined preferences of our new conductor, who "just couldn't get into" pop music but consented to "Think Summer" as a bow to choir tradition. (That, by the way, was renowned organist Thomas Murray, who recently retired as University Organist and Professor of Music at Yale University.)

No, we didn't tour that year. The choir's and camp's agendas often came to loggerheads, particularly when the PA proclamation "All members of St. Paul's Choir please report to Cleaves Hall" disrupted the fun-and-games I was enjoying on Aardvark Day, forcing me to give away the "point" money I'd just won in a putt-putt tourney.

But that sacrifice had its advantages: a good concert, and just compensation for that rehearsal with a timeless summer treat: chocolate-coated vanilla ice-cream "Teddy Bars" like the one on the right, only without the peanuts and fudge and with a wrapper sporting a jolly Teddy Bear image and a slogan, "One Taste Better." Which it was, save for a few choristers who couldn't stay away from Aardvark Day, thus had to "do without their ice cream," in the words of our assistant director.

But ice cream couldn't sweeten up our sour grapes about not having the private turf we had enjoyed for the past 63 years. Now it was clear that it didn't behoove us to shack up with another camp family and get lost in the building-to-building shuffle. We needed to stake our claim to our own camp to truly flourish as a touring chorus.

So next year, luxury was to be ours again at The Governor's Academy in Byfield, Massachusetts. Besides, Trinity Church Camp was on the brink of closing down, too. Its site is now anchored by Pointe Trinity Estates, a luxury gated community, and last I heard, the sole remaining "Aardvark" cabin was being used for storage on one of the properties, and may be all gone by now for all I know.

At least one of Pointe Trinity's homebuilders seemed to 'remember then'... 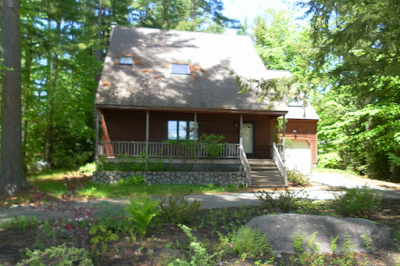 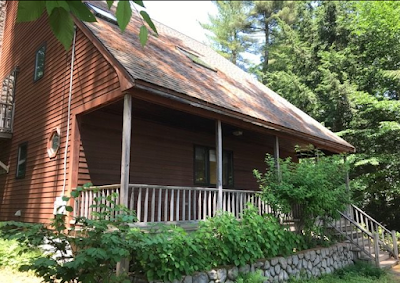 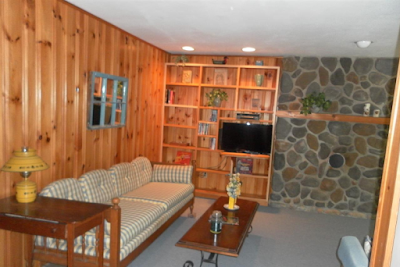 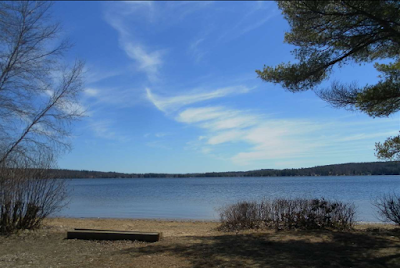