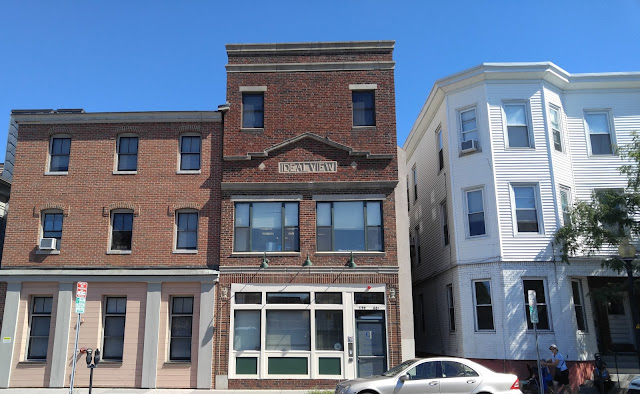 This Cambridge curiosity epitomizes the era when the marketing of real estate was carved right into the building itself, rather than relegated to ancillary signs, banners and billboards à la "If you lived here, you'd be home now" in Boston's Charles River Park. And this one certainly ballyhooed the best reason for living or working here: the 'Ideal View' cast in stone right below the only part of the building that bestowed that privilege—at least when it was built.

But look at the view now... 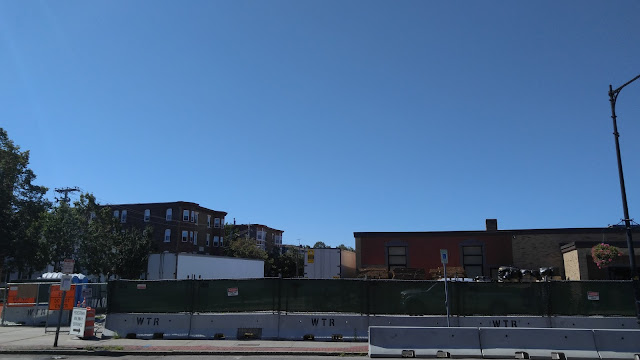 ....a scrappy construction site on the grounds of what looks like a former school, built low enough to preserve at least part of the sky view, but not a very inspiring architectural view to ogle out the window at each morning—far from ideal. And who knows what "view" the new development will leave future 'Ideal View' occupants with, just as the original developers of the Charlesview couldn't predict when they first built it in 1900, before Kenmore Square was fully developed, when...

...the Charlesview's highest-up residents could see straight through to the sparkling waters of their residence's namesake. Of course, that name became moot when buildings sprang up across the square, which gave air-rights to two of the vilest view-blockers: a billboard and a neon sign. (Yet I'm sure that the Charlesview's penthousers deem the Citgo sign an "ideal view," now that it's a beloved Boston icon.)

Of course, this 'Charlesview,' on Beacon Street in the Back Bay, was more deceptive from the start, as its front-entrance façade's curb appeal couldn't live up to its name; only its uppermost backside tenants could drink in the river as their canopy conveyed. The frontside ones were stuck with...

...the Charlesgate, a handsome hotel indeed, but not the promised view. Yet still an appetizing one, with a distinguished castle-like presence as a Queen Anne–Romanesque Revival–French Second Empire hybrid with a conical corner-tower, pressed-copper oriels, arched parapets with finials, a rock-faced granite base, and other delights to drink in with your morning coffee.

The only "Charlesview" totally true to its name is the CharlesView Ballroom atop the Hyatt Regency Cambridge, a symbol of the ballroom's core intent: "Step up to finer viewing pleasure." Its direct view of the river and the Boston skyline exceeds what you expected from its name. An Ideal View, no? Trouble is, it's a great place to visit, but you couldn't ever live there... 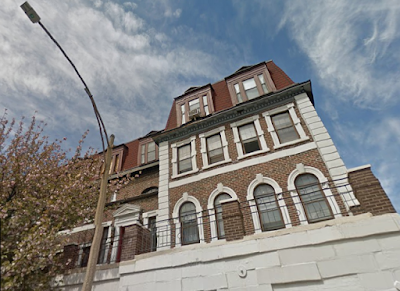 ...but I once lived here, in an Allston condo that truly gave me what its street-honorific, Bellvista Road, told me it would. Meaning "Beautiful View" in Italian, the road lifts the building up a hill, assuring its rear penthouse units' occupants of a bellvista when they step out onto their rear balconies and gaze at the Allston-Cambridge skies... 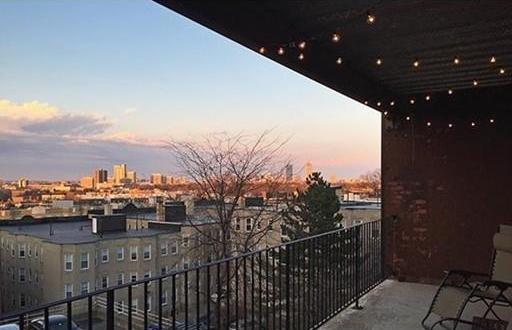 It was from here that I witnessed the erection of the Genzyme Corp.'s Biopharmaceutical Manufacturing Plant on Allston Landing (right) in the early '90s. From my perch it had the aura of a majestic cathedral rising toward heaven, which its postmodern Georgian Harvard derivative design truly gives it, even from the ground. A bellvista and an Ideal View, to be sure!