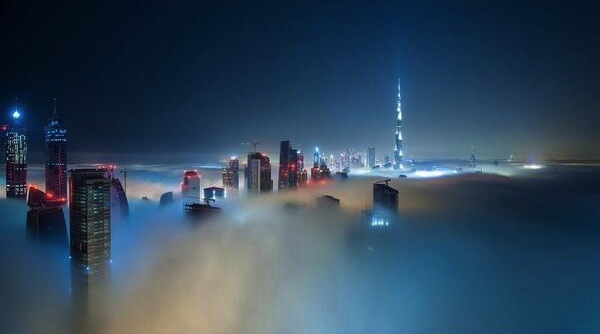 That was the prompt in a recent writing exercise in my Wordplay Meetup group. And it left me in a quagmire about how I could possibly take a shot at it in an architectural context. Well, luckily the above image popped up on Google — and transmedia entrepreneur Steve Iles' Twitter take on it (@sjiles8) was point-blank: "An amazing photo of Dubai at night. Looks like a shot from Blade Runner."

And he wasn't kidding. The fog has a way of morphing UAE's main port of entry into the ghostly likeness of Los Angeles 2019 (yikes! Two years away!) as depicted in Ridley Scott's 1982 sci-fi classic. Dubai's office-building lights eerily poke through the dark and the fog, signifying the steadfast impact of technology on society and nature (for better or for worse) with a clashing contrast of film noir gloom and high-tech dignity. Like the L.A. foglights in the Blade Runner image above, Burj Khalifa — the world's tallest building as of this writing — shoots up with a light-saber spurt as the iconic signature of the enterprise, standing tall and firm against nature's attempt to supplant human progress by fogging it up.

Built in 2010 from an Islamic-inspired design by Adrian Smith of Skidmore, Owings & Merrill — the architects of two other "world's tallest" candidates, Chicago's Sears (now Willis) Tower and New York's One World Trade Center — Burj Khalifa stands 2,722 feet from base to tip, courtesy of its Y-shaped, triple-buttressed hexagonal core reinforced-concrete structural system that withstands twisting and high winds, in addition to the gradual stacking and layering of its load-bearing capacities in the graduated bundled-tube structure form the Sears/Willis Tower had pioneered in 1973 (see below). Thus Burj Khalifa is well-anchored to the ground by gradually bulking and spreading outward as it gets lower so it is in no danger of toppling, like its top-of-the-world ancestor, the Empire State Building. Yet it uses half of the Empire's amount of steel, thanks to its tubular system, whose layered, stepped, rounded effect gives it an organic quality... 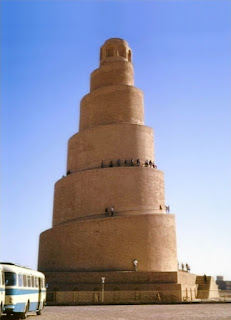 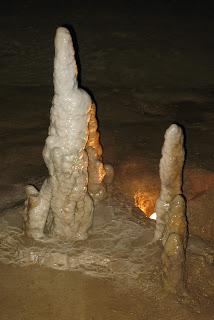 ...like the Islamic spiral minaret (here, the Tower of Babel-esque helix of the Great Mosque of Samarra in Iraq, built in 851) or these stalagmites
in the Choranche Cave near Grenoble, France...


...but less like its primary model, Chicago's Willis Tower (formerly Sears Tower), which shoots up like a stacked bundle of skyscrapers (it essentially is; each "tube" is a separate building with its own floor plates and elevator). Yet the squared-off structure of each of the nine tubes stagnates the sense of upward motion that the curves of the Burj Khalifa, the gyre of the Great Mosque and the contours of the stalagmites convey. They all move the eye upward, whereas the Willis seems to shift it from one block to the next, mixing lateral and vertical jarringly. While pioneering the bundled tube structure as a resister of wind and seismic forces and a way to parse office space economically while keeping it ample, the Willis needed a successor to bring its tubular design to a loftier form that made its structure dramatically as well as functionally forceful.


For the Willis shows its parts too distinctly, which arrests its upward progression in our sight, particularly when it "pauses" at its flat roofs. The rounded layering of the Burj Khalifa, however, makes it appear as more of an organic whole, seeming to shoot up in one fell swoop. This recalls "The Illinois," Frank Lloyd Wright's 1957 conception of a mile-high skyscraper (right) as a protracted pyramid with projecting parapets — likely an inspiration for Burj Khalifa in its straight-up projection...like a shot!