Prends garde: Boston may be getting its own Eiffel Tower — in the form of a Ferris wheel.

Capitalizing on the success of the London Eye (above) in giving the British capital an iconic funfair focal point akin to Paris's Eiffel Tower and Seattle's Space Needle, Delaware North Cos. of Buffalo is proposing an observation wheel as part of its City Hall Plaza revitalization plan, touting it as "an unexpected option, but it might just be the concept that will jumpstart the vitality needed for City Hall Plaza."

For one, a Big Wheel in the Plaza would divert attention from City Hall as the colossal cynosure of I.M. Pei's original scheme for the area. (True, many wouldn't care, as City Hall is now one of Boston's most reviled buildings. And, yes, a ride to the Boston skyline would be more fun than a scurry through City Hall's maze of bureaucracy.)

Second, wide open as the Plaza may be, it is still too limited a space to allow Ferris wheel passengers the best eyeful from terra firma to firmament. On one side, the wheel would be so hemmed in by the blockades Center Plaza and the JFK Federal Building put on the surrounding cityscape that Boston's skyscape couldn't be fully taken in until passengers are about halfway up.


Observe how the sweeping parkland-riverfront sitings of the Eiffel Tower and the Space Needle and the Thames river-edge of the London Eye, almost unobstructed by skyscrapers and streetwalls, allow visitors to experience the expanse of the landscape virtually from the moment of liftoff. Furthermore, such open spaces are necessary for these structures to fully reveal their sculptural presence from many directions: the Eiffel's parabolic "arc de triomphe" grandeur, celebrating the mathematical wonders of engineering; the Space Needle's outerworldly soar, symbolizing America's quest for space travel...

...and the London Eye's Claes Oldenburg giantism, taking the form of a titanic bicycle wheel, as a monument to the tensile elegance and cooperative strength of spoke-structure in transportation engineering. By contrast, the barriers of Center Plaza and the JFK Building and the cluster of Financial District skyscrapers would limit views of an observation wheel to only a few directions — and doubtless its design would not match the London Eye's refinement. 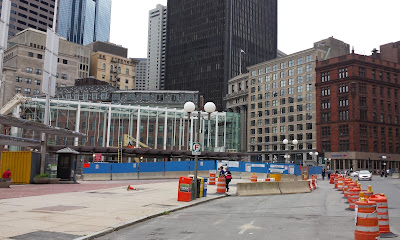 Third, the Plaza has already been invaded by too many techno-trifles that are intrusive, not constructive. The new Government Center MBTA station headhouse blocks key views of the Sears Crescent from Cambridge Street and City Hall from Tremont Street as a big glass thing of unclear purpose. 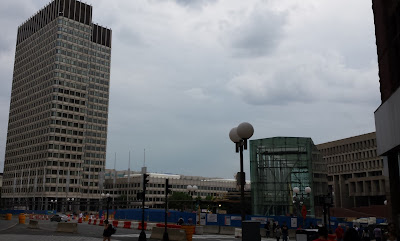 Also, the string of poles and benches along Cambridge Street has become a folly; nobody ever sits there or flies flags there. And, like the headhouse and the polechain, a Ferris wheel would screen out City Hall from one angle; Pei intended its prominence from all angles along Tremont and Cambridge.

Besides, in the wintertime the wheel would become as useless as the poles and benches, just sitting and rusting while waiting for spring. Not a very elegant use for such a costly venture.

So: Eye say "Nay" to the Boston Eye. City Hall Plaza should be transformed into a vibrant, attractive center of culture, community and commonwealth — not another Six Flags.