My childhood romps through Central Park in New York City often took me up a steep incline to the summit of Vista Rock, where craggy, creepy, crumbly old Belvedere Castle ominously hulked over me, convincing me beyond any reasonable doubt that Count Dracula dwelt therein.

(The towering citadel was actually used as the castle of "The Count" on Sesame Street in its pre-restoration days of decrepitude, which suited his batty ways to a T.)

But the old haunt's weather-beaten door was always barred to me, dashing my hopes of meeting the venerable vampire in the flesh.

Now revamped as the Henry Luce Nature Observatory (named for TIME Magazine's founder), the castle has opened its door, inviting families to see not bats in the belfry, but birds in the Belvedere.

The observatory has a collection of bird feathers and skeletons and other natural history artifacts for young ones to scrutinize with a scientist's eye through the on-site telescopes and microscopes, which introduces them to the scientific method by which naturalists observe the world, draw conclusions about its inner workings, and share their insights with the community.

Upstairs, papier-mâché reproductions of species of birds often observed in Central Park perch on a plywood tree, piquing family curiosity about what's really flying around out there, encouraging families to watch for the real things from the Romanesque double window or, better yet, the castle terraces overlooking Turtle Pond (below) or along the Ramble just below the great gray bastion.

Always nature-centered in its own right, Belvedere Castle was constructed in 1871 of gray rock-faced granite and the park’s native schist — a layered crystalline rock as unique to Manhattan as Roxbury puddingstone is to Boston — as a semi-natural outgrowth of Vista Rock, Central Park’s second-highest natural elevation. 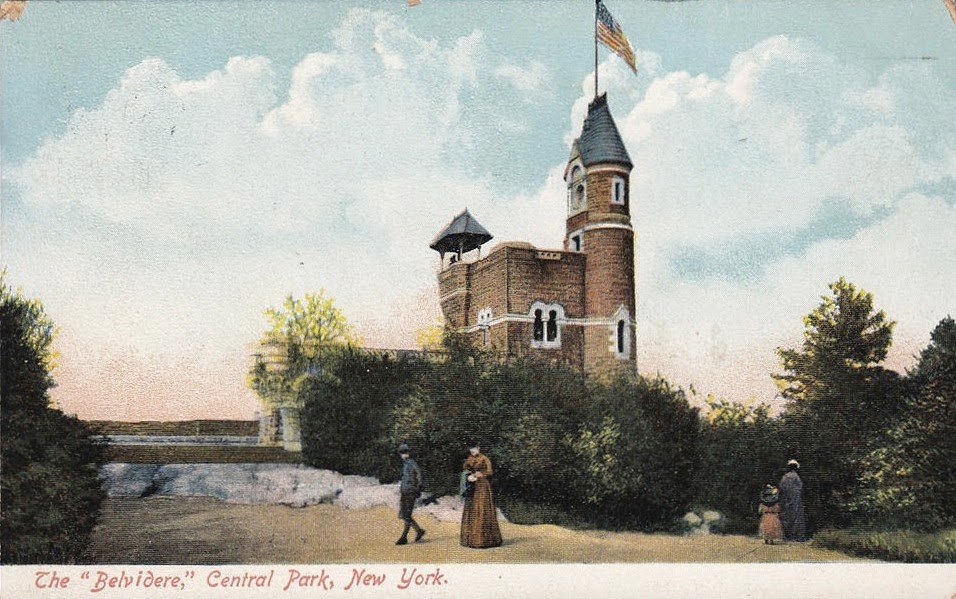 Built as a shell with open portals and unglazed windows topped by Mould’s bronze sculptures of bat-winged cockatrices, the castle was enclosed as New York’s Weather Bureau Station in 1919. For the meteorological equipment, the tower’s conical slate roof with copper cresting and flagstaff was replaced by “more martial ghost-walk battlements." (M.M. Graff, The Men Who Made Central Park, 1982) Weather data have been collected there for local reports ever since.

So whenever TV or radio meteorologists announce, “The temperature in Central Park is…”, that figure comes from the castle in the air.

But when the Weather Bureau Station relocated to Rockefeller Center in the late 1960s, the castle was closed to the public and besieged by decay, neglect and vandalism. Neon-streaked graffiti marred its crumbling walls, weeds sprouted in its eroding mortar, and vandals pushed away sections of its surrounding walls.

But the danger that posed didn't stop my ornery, foolhardy fourth-grade classmate Richard July from insisting we climb all the way up there during our afternoon sports period.

"But the sign says, 'PLEASE KEEP OFF'!" I cautioned.

"Aw, who cares about an old sign!" he retorted as he gave me a shove—subconsciously wanting to push me over the cliff with the old walls, perhaps.

In the end we didn't take a tumble into Turtle Pond, but we got chewed out plenty by Mr. Dietz, our sports teacher, for defying his peremptory order, "No wandering off by yourself!", for boldly going where no man was allowed to go, and for nearly breaking our necks (or getting them bitten by Drac, whichever you believe).

But the humor turned to pathos in 1975 when I read in The New York Times a sad story about Belvedere's besiege, described much the way I did above while presenting plans for its renewal. Times critic Paul Goldberger pronounced it "a near ruin" in his 1979 guide to the architecture of Manhattan, A City Observed: New York.

The mighty fortress was on the brink of collapse when the Central Park Conservancy rescued this damsel in distress in 1983. Its restoration included reconstruction of the original tower roof and colorful wood terrace pavilions from their extant foundations, which brings more depth and dimension to the pedestrian's visual experience of the castle by showing how precisely Vaux framed views of the park, the city and the tower itself with the lace-collared terrace columns.

Furthermore, Belvedere's renaissance was just in time for its use as a filming location for the 1984 Merchant-Ivory film The Bostonians, based on Henry James’ Victorian-era novel, starring Vanessa Redgrave and the late Christopher Reeve of Superman fame. 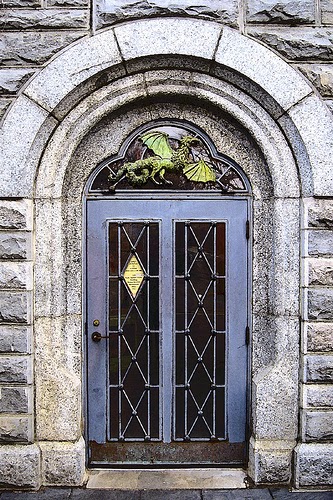 Drac may have flown the coop, but its eeriness lingers: every Halloween, the cockatrices signify it as the “Spooks at Belvedere” haunted castle. Other free family programs there include storytimes with the Princess of Belvedere Castle, stargazing and birding programs.

Henry Luce Nature Observatory at Belvedere Castle in Central Park, New York City, is open from 10 a.m. to 5 p.m., Tuesday through Sunday. Admission is free to all. For more information, call (212) 772-0210 or contact centralpark.com/contact