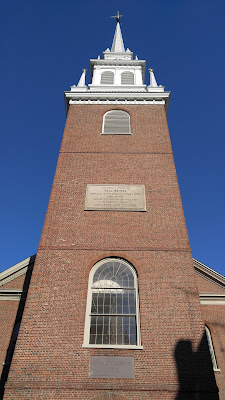 "Little or no ornamentation." 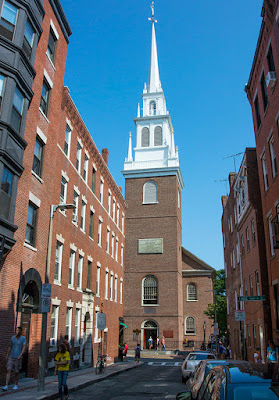 Oddly enough, all of the above characterize Boston's Old North Church, though it hails from an era almost 200 years before any of the above could cross anyone's mind. After all, brick, wood, stone and slate were the available building materials, and Georgian was the design model.

Yet Puritanism checked the ornamental excess of England's priests and bishops, Anglican as Old North was. And this is evident the moment we enter the church.

What greets us is not a hefty eyeful of cherubs, scrolls, leaf-moldings, rosettes, frescoes and statues, but a lithe dance of arches, vaults, lines, squares and slender columns that clearly reveal not only the church's structural system, but also the thinking behind the purity and simplicity. 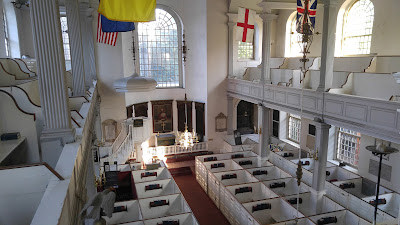 In the name of the Anglicism with which Henry VIII had declared his independence from the Catholic church, Old North's designers and builders forswore the ornamental indulgence that characterized the abbeys, basilicas and cathedrals of European Catholicism for a clean back-to-basics feel that followed Massachusetts' established Puritan aesthetic, blended with the lowliness of North End residential architecture, and saved money to boot. 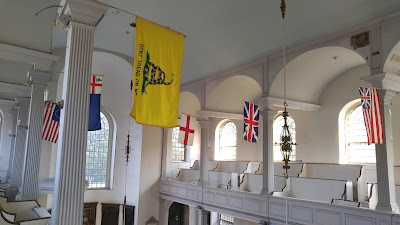 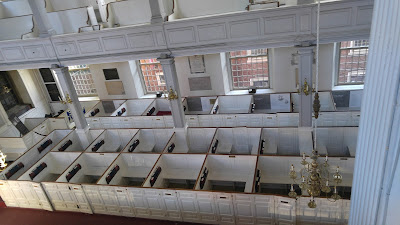 The pews and their paneled doors, too, are straightforwardly geometric: just rows of rectangles expressing their social function and sense of order, like modern office cubicles. Their height and depth signify the security and the foot-warmer heat containment they offered parishioners. 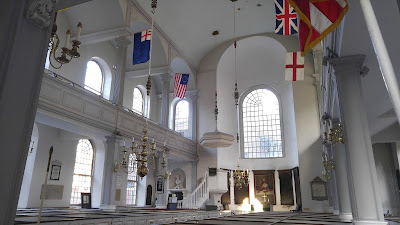 The grandeur of the chancel window, in contrast to the human scale of the others, extols the minister's supremacy over the congregation in spiritual enlightenment. Its space-illumination evokes the Light of God falling afresh on the parishioners, aided by the side windows lighting their prayerbooks. 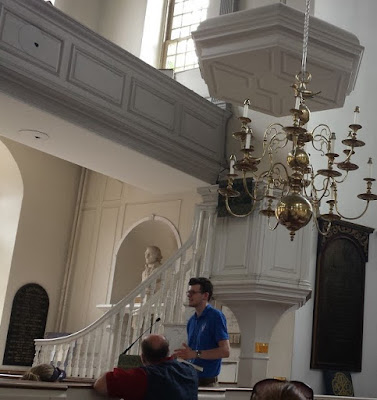 The pulpit largely follows the Puritan pattern of the church structure. Its tapering base, culminating in a simple capital upholding the enclosed podium, articulates the solid footing it gives the minister while raising him up to a superior level, which also symbolizes the resurrection of Jesus to a degree. The dangling sounding board and its paneling emphasize the rostrum's hexagonal geometry in a proto-modernist fashion. Only the stair breaks the Puritan rules a bit with turned balusters, giving the minister an iota of the dignity the congregants lavished on him... 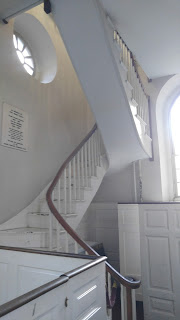 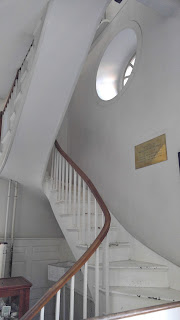 ...in contrast to the simple rod balusters of the back stairs to the galleries and organ loft. No doubt these stairs were built that way to save money, being out of the way of the main sanctuary, and the pews turn the worshipers' backs on the stairs, facing them toward the ceremony. The stairs' simplicity also signifies the lower social rank of those who used them—organist, organ-pumper, sexton, bell-ringers—compared to the relatively well-to-do worshippers. Nonetheless, the barren structure of the stairs elegantly brings out their curves, which gracefully convey a sense of movement (like an ascending or descending scale of organ notes) while cluing us into their structure, as forerunners of the spiral staircases of the modern era. 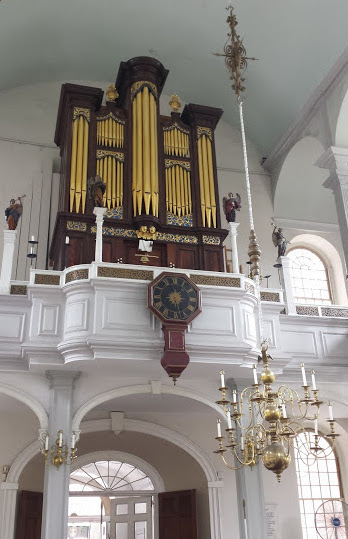 But what they rise to breaks more faith with the Puritan aesthetic: the organ and its guardian angels. Built by Thomas Johnson in 1759 (36 years after the church, hence the stylistic deviation), the organ is richly carved and gilded with scrolls, cherubs and Grecian urns. The angels, possibly carved in Belgium in the 1620s, were stolen by Thomas Gruchy from one of three French ships he had captured as captain of the Queen of Hungary, a ship enlisted in King George's War in 1744 as a British privateer to plunder enemy merchant craft. Gruchy donated the angels to Old North in 1746, though they typified the Catholic excess the Anglicans and Puritans had cast off by coming to the Colonies.

The chancel, too, pumps up the ornamentation, albeit in a chaste way. The four side panels, topped by arch-lintels recalling the organ's scrolling for front-to-back balance, display the Lord's Prayer, the Ten Commandments and the Nicene Creed with English Medieval nobility and reserve. The central portrait of Jesus Christ at table is modeled on... 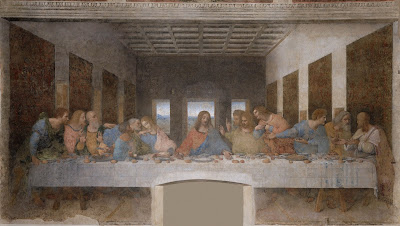 ...Leonardo Da Vinci's The Last Supper, an Italian Renaissance-era exercise in elements of future modernism: bare columns, walls and ceiling beams, so painted so as not to divert attention from the central drama of communion and betrayal in the foreground. 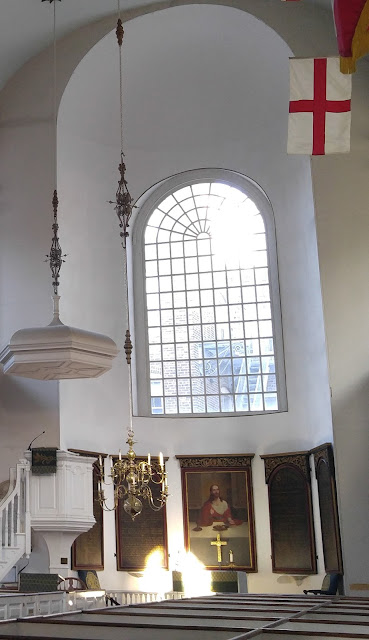 Likewise, Old North's clean lines, arcs and concavities and ubiquitous pearly-white treatment focus the congregation's attention on the central figure of Christ (appropriate to the building's official name, Christ Church) by eschewing the distracting embellishments of the Old World abbeys, basilicas and cathedrals the first Colonial American settlers had fled. This effect of pure form emphasizes the purity and chastity Jesus preached: "Blessed are the pure in heart: for they shall see God." (Matthew 5:8)

The large windows of clear, unstained glass make it easier to "see" this Light of God by flooding the open, fluid white space with light. This is aided by the chancel window's eastern orientation, which catches the morning sun in full force for the service's full hour, thanks to its height. This foreshadowed the high windows and glass curtain walls of modern architecture. 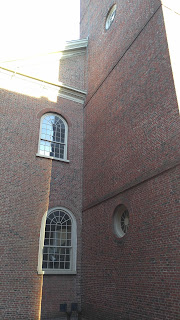 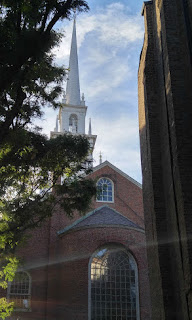 The exterior reveals this effect. The bulge of the rear bay (left) articulates the volume of the apse, and the size of its window—in contrast to the small gallery and attic windows—gives us a sense of the light the space receives on Sunday morning. These elements also trumpet the apse's importance as the minister's sacred spot. This is one of many ways Old North externally expresses its diverse interior functions with fenestration variation. The oculi in the front pavilion (right) define the staircases to the galleries and organ loft, and window size denotes social rank in general at Old North: tiny oculi for the lower-class hired hands, shorter gallery windows for the servants (and, originally, slaves), taller first-floor windows for the well-to-do laity, and the towering apse window for the high-ranking minister.

Furthermore, the protrusion and relative solidity of the church's front pavilion is an early example of a core tenet of modern architecture: the individuation of the service core from the rest of the building. The flights to the galleries, organ loft and steeple are clarified by the semi-autonomous tower—as is the privacy of the steeple stairs. This came in handy for Paul Revere's plans to display the lanterns signifying the British Regulars' procession to Lexington and Concord just before his midnight ride there on April 18, 1775: the tower's minimal fenestration enabled church sexton Robert Newman to ascend to the belfry with the lanterns unseen. 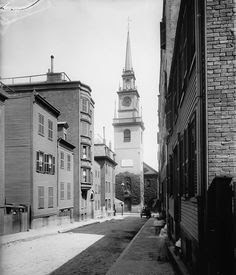 Speaking of unseen, this 1890s image of Old North Church shows how the low-scale houses of the period granted ample space for the church to assert its ecclesiastical authority over its neighborhood and realize its full architectural expression, before they gave way to tall, bulky tenements and schools to accommodate the immigrant influx. Now these buildings partially obscure and shadow the church, make it harder to photograph in its full form, and mimic its towering brick solidity. This, sadly, deprived Old North of some of the monumentality it had enjoyed in its "village church" years, making it another swimmer in the red sea of brick as it yielded to the modern age.


But that was also how the North End's turn-of-the-century masonry makeover blended Old North better into its surroundings. This made it more of a neighbor than a nabob, and just as modern as historical, through the transcendent timelessness of brick. Which made it even more of a modernist prototype, foreshadowing architect Louis Kahn's aphorism, "Even a brick wants to be something."