Letting a building go to ruin with the passing of its purpose, its people and its place in the sun is nothing new, so to speak. But building a "ruin" from the ground up was news indeed, when Bernard Maybeck designed a Palace of Fine Arts for San Francisco's 1915 Panama-Pacific International Exposition to evoke the aura of an ancient civilization.

...is, indeed, an odyssey back in time to the imperial pomp and classical grandeur of ancient Rome and Greece. Which was just what Maybeck and sculptor Ulric Ellerhusen set out to revive when they designed the building as an architectural praeludium to an Impressionist paintings gallery at the Exposition, a world’s fair honoring the completion of the Panama Canal and the reconstruction of San Francisco following its 1906 earthquake.

“Befitting the incalculable value of its contents, the Palace of Fine Arts will be a fireproof structure, and it will also be an architectural classic,” read a visitors’ guide to the exposition provided by Rainier Beer Company. “Its length from north to south will be 600 feet, and on the placid waters of an artificial lake will be mirrored its Grecian beauty.”

An architectural classic it was, and is. Modeled in part on the ancient ruins of the Villa of Emperor Hadrian from the second century A.D. near present-day Tivoli in Italy (right), the Palace of Fine Arts awestruck visitors with its colossal Corinthian columns, Grecian urns,
carved friezes and allegorical figures of Greco-Roman gods, goddesses and mythical personages, Greek key beltcourses, Roman arches and other lavish
décor, designed by Maybeck’s assistant William Merchant. Guests enjoyed concerts under the coffered dome's splendid acoustics.

The lake, mirroring those in European classical surroundings, reflects the grand edifice and creates an unobstructed view of it. Ducks, swans, geese, turtles, frogs, Australian eucalyptus trees, and the Walter S. Johnson Park add to the effect of an artful oasis from city congestion. A fountain honors ancient Rome without distracting from the main attraction. 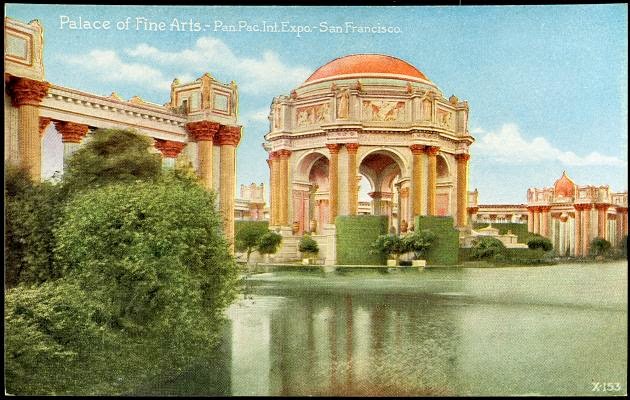 The only remaining building from the exposition, the Palace of Fine Arts was originally built of wood-framed “staff,” a blend of plaster and burlap-like fiber, as a temporary structure to be taken down after the fair, but popular interest in preserving it kept it standing.


However, it decayed and crumbled over the years as its park became a tennis court complex in 1934 and a U.S. Army motor pool during World War II. The structure was finally rebuilt in reinforced concrete, using castings made from original ornament, from 1964 to 1975, under the initiative of philanthropist Walter S. Johnson, the park's namesake.

Speaking of entertainment, the Palace’s monumental appeal has made it a choice backdrop for numerous movies and TV shows, including Alfred Hitchcock’s Vertigo (above), The Streets of San Francisco, Time After Time, and The Rock, where FBI agent Stanley Goodspeed (Nicolas Cage) confronts John Mason (Sean Connery) while he is speaking with his estranged daughter (Claire Forlani) in the rotunda.


A replica of the rotunda was built for the Golden Dreams attraction of Disney's California Adventure in Anaheim. It is now part of The Little Mermaid: Ariel's Undersea Adventure there. However, by conforming to Disney's squeaky-clean image, this fakery strays the Palace further from its Roman ruin origins...


...than its intricate restoration had already done. Yes, one drawback to this odyssey through imperial prehistory is its lack of the mystery of a true ruin like the one that inspired it. Which exposes it as a mere stage set to fill the eye with opulence rather than pique the curiosity about how past peoples built and used such space and structure.