The shower: from practical to palatial

Notorious for spatial and cosmetic excess as the Victorians were, the shower was where they downsized their decorative, expansive impulses and focused on the most practical, space-saving ways to get clean and refreshed and get on with the morning.

Which made the shower experience pretty cramped for them, compared to the palatial pomp of the parlor — perhaps on purpose so they wouldn't linger too long in the loo...

...though the wealthier may have been tempted to do so by plumbing's highest tech of the times: the "needle" shower (left). It encircled the user in nickel-plated brass rings of pinholes spurting needle-thin water-jets all over the body. This made a shower a full-body massage (or polar-bear swim, depending on how the heat and pressure were adjusted with the valves and taps that came with the contraption).

Also called the "cage" shower, its bare-bones structure proved a bit jailish for the uppercrust after a while. Hence the advent of the "canopy" shower (above, right), which extended a porcelain enamel basin up into a hooded concave shower-wall and often encased it in finely finished wood or accented it with enameled metal ornamentation. This framework gave the user the sculptural poise of a nude statue in a niche. Canopy showers were also pumped up with "douche" and "plunge" settings for stimulating water-cascades, "kidney" or "spinal" sprays for deep-tissue massages where the body was tensest, or even shampoo sprays. 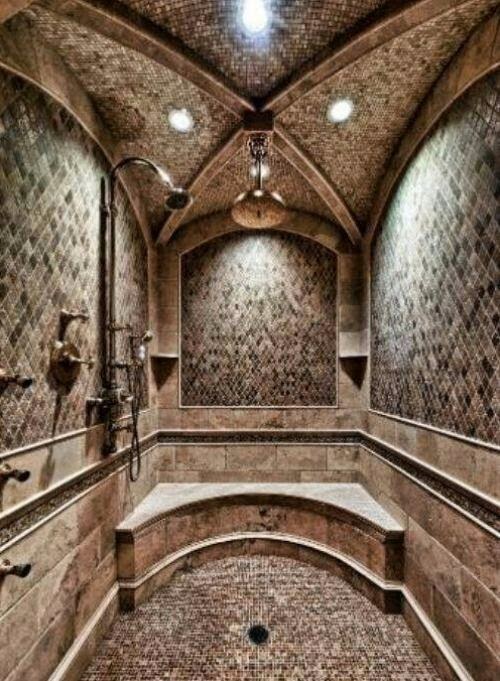 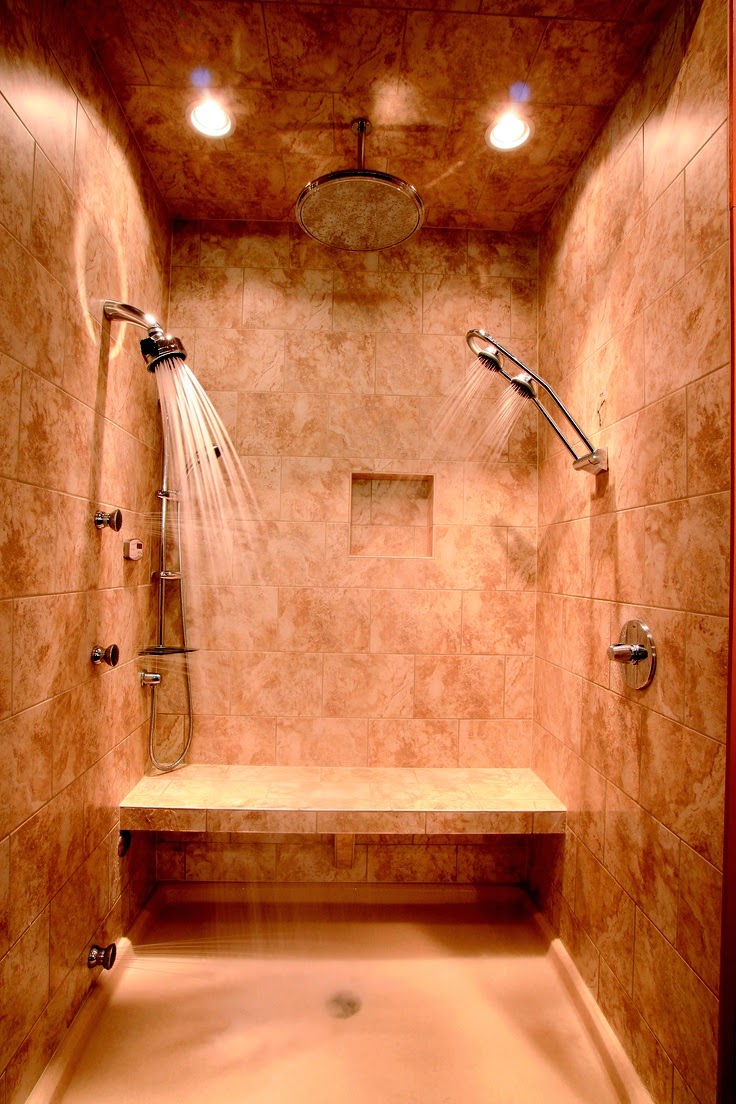 Which meant that the luxury of a morning shower was transpiring to the visual as well as the physical level...as not just a bare necessity, but an eyeful, as well as a full-body sensation.

The above examples show how today's homeowners are surpassing the Victorians in stylistic standards for their water-wonderlands. Touches of Gothic England (left) and Renaissance Italy (right) make the shower a world into itself, tempting you not to leave this old-world opulence to face the real-world tensions the shower's steam and stream try to wash away. 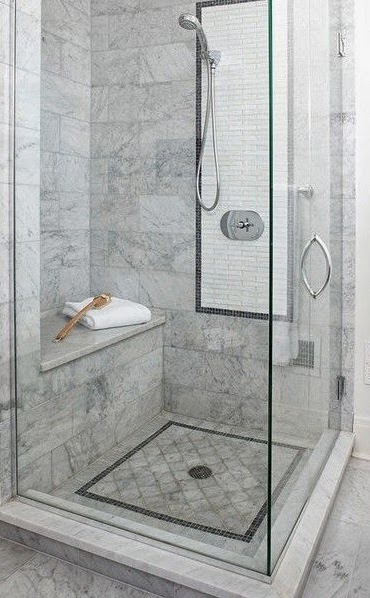 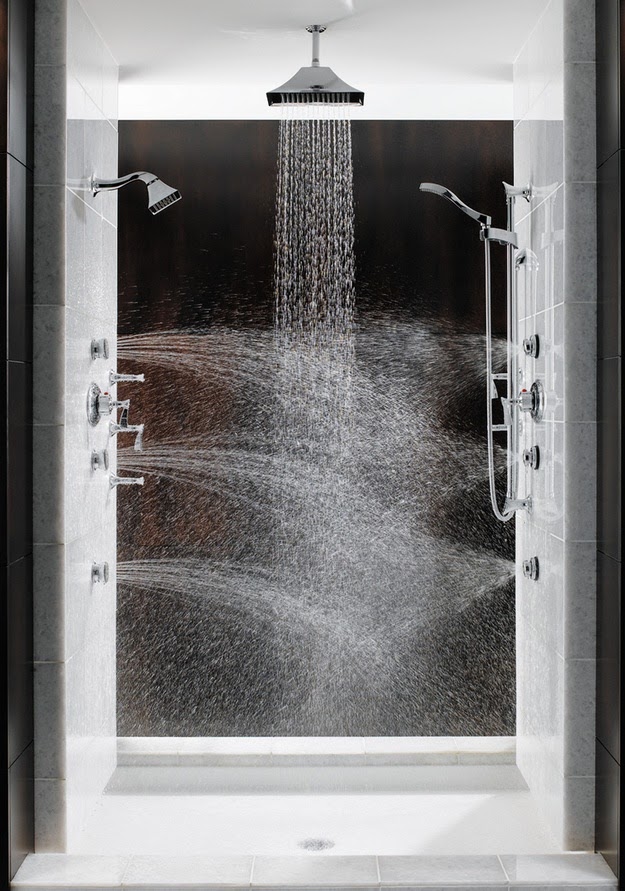 The glass corner lets the sun pour in like shower-water (left). The Carrara marble lightens up the corner further, so you can sunbathe as well as bathe. Conversely, the dark treatment (right) mystifies your daily douche, bringing out the sculptural beauty of the rains as they give you the works. 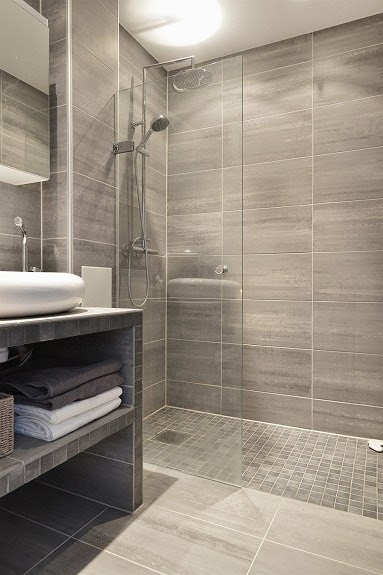 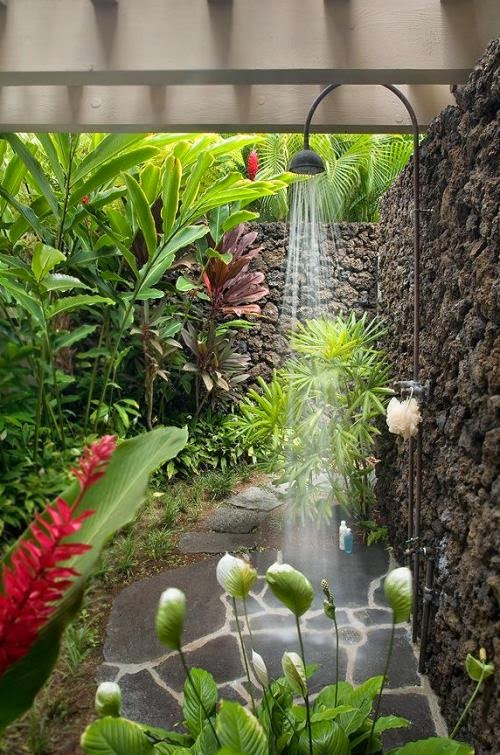 But if you want to go midstream between light and dark, neutral gray tiles coolly complement the soothing serenity of your shower (left). And so does a natural setting (right), which brings the water back to its source — nature — for a really relaxing refreshment. 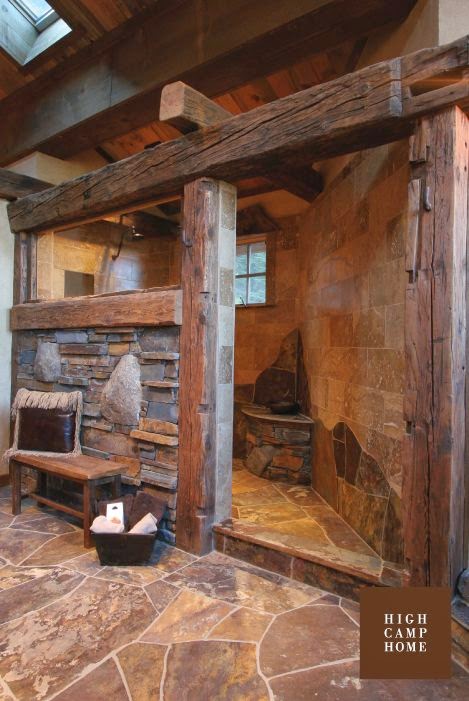 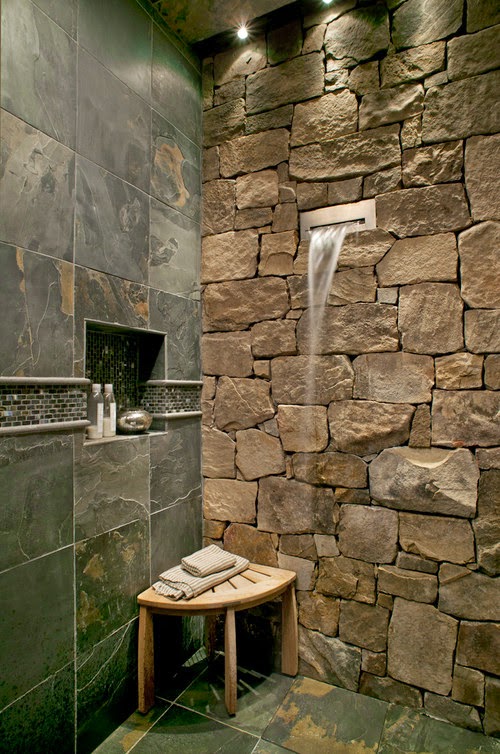 Other natural feels for your shower include hand-hewn wood posts and beams, for rustic ranch or log-cabin intimacy (left). Rough-cut fieldstones (right) give your shower-stream the aura of a waterfall or natural spring streaming out of the rocks. 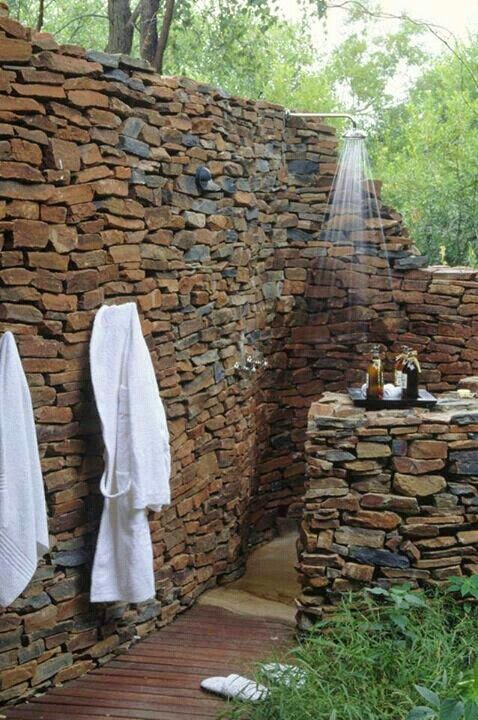 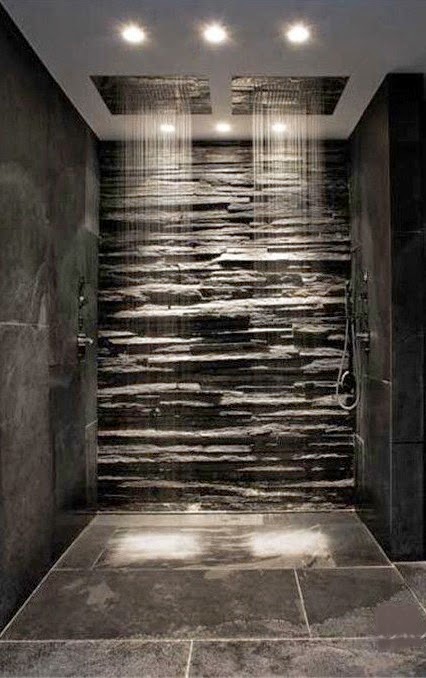 As the shower naturalizes, its barriers dissolve. Like old ruins, the stacked stone walls expose the shower (and its users) fully to nature, nakedness and all (left). By contrast, the stone-stacking (right) reinforces the shower's closure with the brutal mass of a dungeon wall too high and thick for escape. 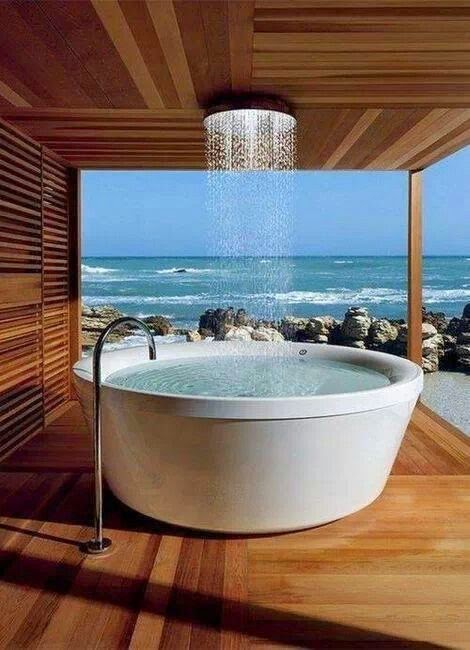 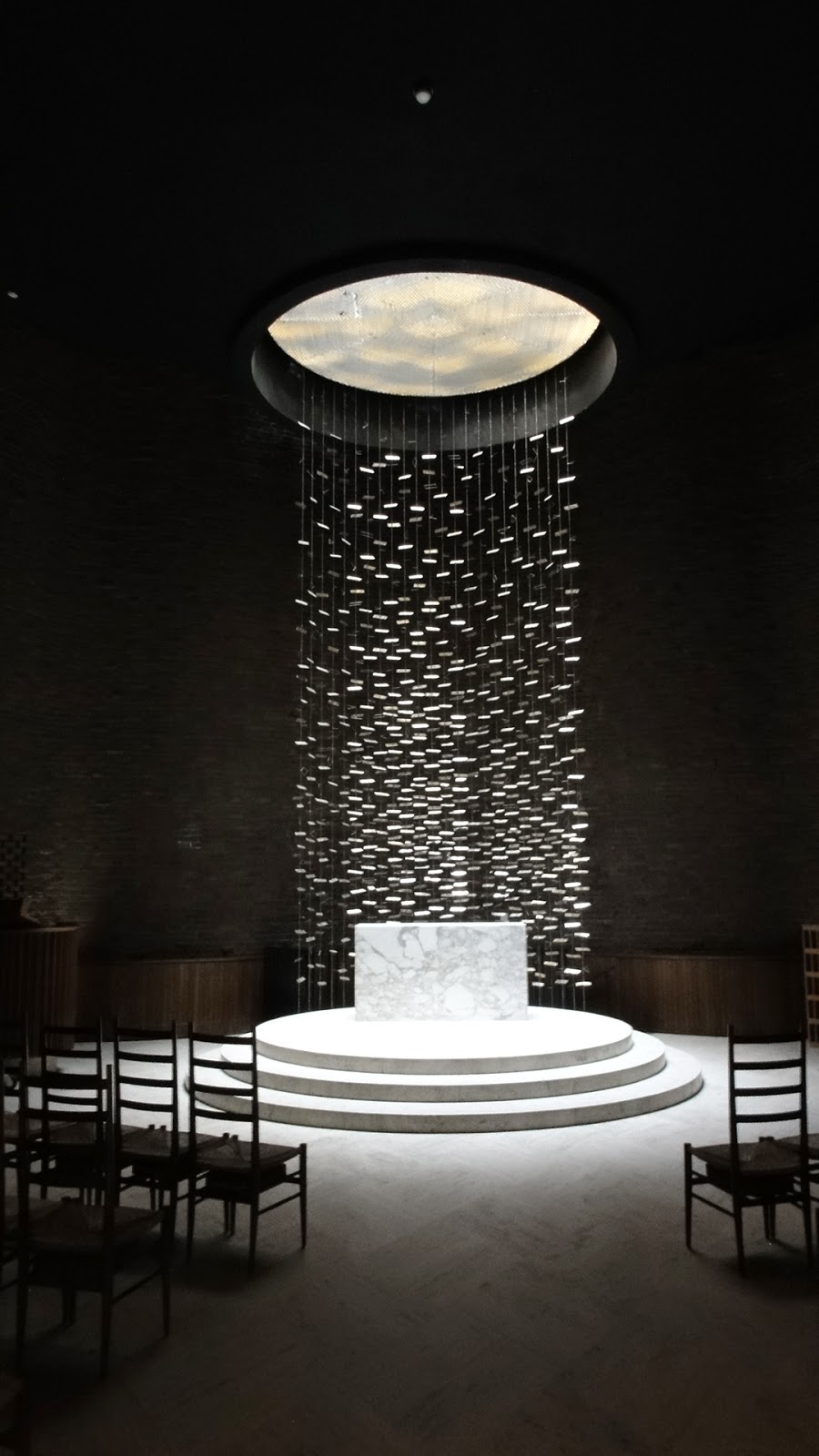 The skylit shower descending into a circular tub (left) may have taken cues from Harry Bertoia's skylit sculpture of small metal panels cascading onto the circular altarpiece in Eero Saarinen's 1955 MIT Chapel (right), reinforcing the concept of the modern shower as a sanctuary of spiritual peace. 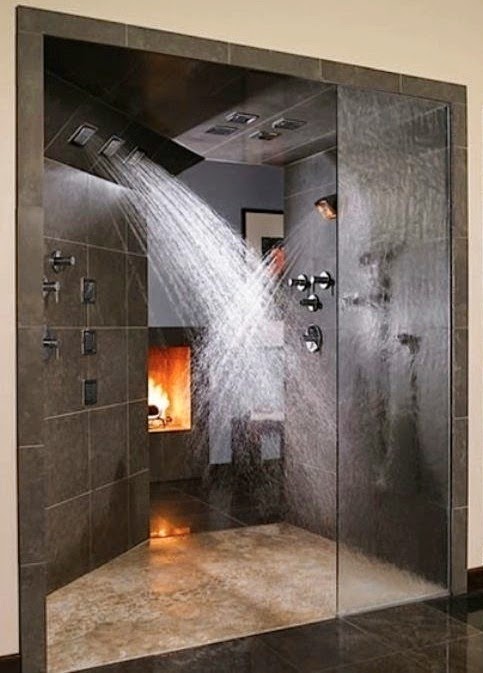 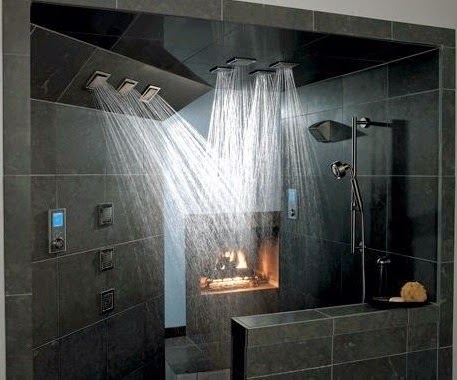 A fireplace in a shower? How can nature's most averse rivals — fire evaporates water, water quenches fire — coexist so peacefully in one space? Perhaps the fire hastens the warm-up and dry-off process when the water goes off, sparing the user the abrupt aftermath chills that often follow a nice hot dousing in the douche. (No wonder the right-hand image's Pinterest pinner, Tamara Spencer, said, "My daughter would never come out of there!!! Neither would I!!") 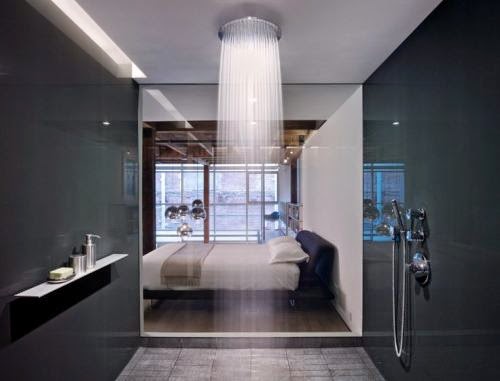 Two other adversaries, the slumber of the bedroom and the wakeup of the shower, are also becoming bedfellows, perhaps to hasten the morning get-go (and evening hay-hit) by reducing the paces between sheets and shower, sparing users the frenzy of darting down the hall to make the head. The chandelier-like rain head quickens the wash as well — elegantly. 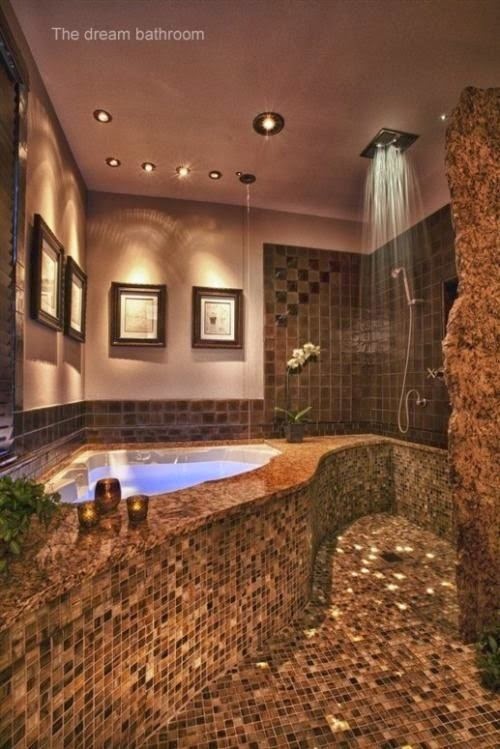 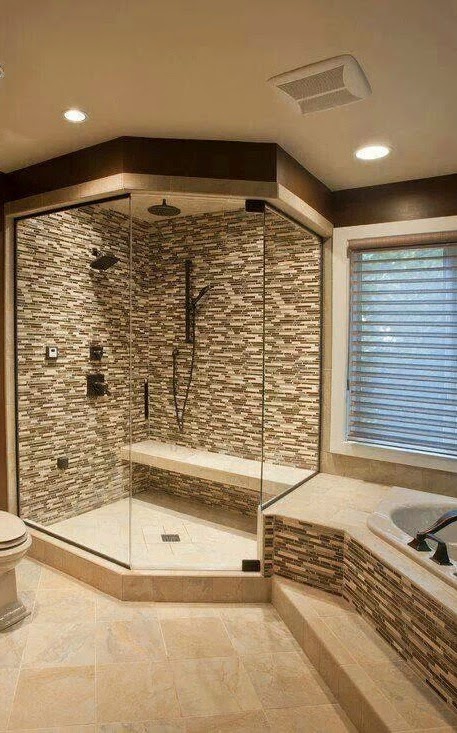 The animated tiles and free-form spaces of these "dream baths" show how splashy today's shower can be, visually captivating the free-flowing splish-splash of the water, making you not want to leave your waterworld. But that can mean time and money down the drain. 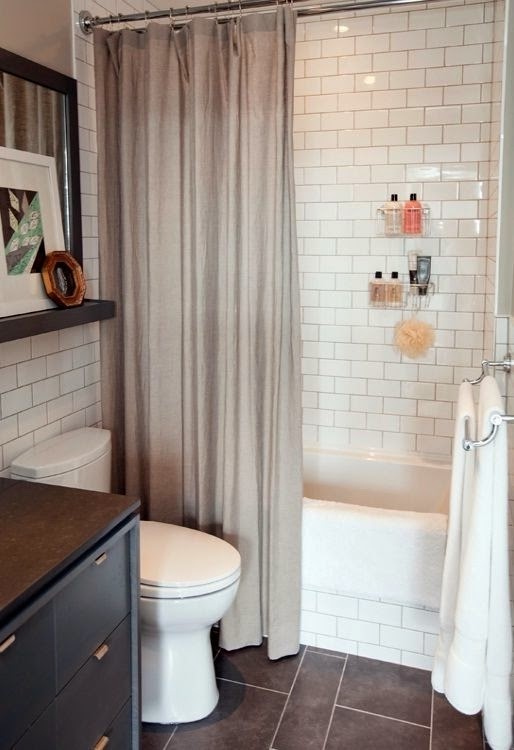 So the choice for those of modest means and little leisure may be the traditional white-tiled tub/shower, for which we can thank the Victorians for heeding Thoreau's counsel for a change: "Simplify, simplify."