Power and pallor in presidential libraries and museums — Part I 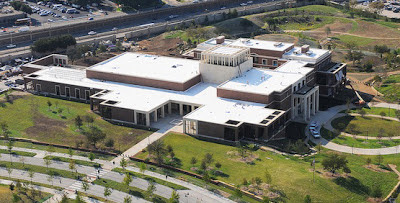 The just-opened George W. Bush Presidential Center I critiqued in my previous post invites comparison to the libraries and museums of Bush's predecessors — if only for its critical deficiency in creativity, composition, and credibility about its subject.

Running the gamut from powerful to passable to poor, these shrines to sovereignty often do visually reflect their namesakes (or the images thereof) to the point where a president's flaws sometimes surface in the architecture. Which attests to the sorry state of affairs in presidential library-museum design, compared to its genesis:

The academic distinction of the 1870 Stone Library at Adams National Historical Park in Quincy, Mass., resulted from the complete creative control the Adams family exerted over the building from the time John Quincy Adams called for its construction in stone in his 1847 will, to protect his books, manuscripts and maps from fire.


His son, Charles Francis Adams, hired Edward Clarke Cabot to do the design honors, remembering the scholarly splendor Cabot had brought to the Boston Athenaeum library in 1847. Simpler in design, with the intimacy of a Gothic cottage rather than the grandeur of a classical temple of learning, the Stone Library visually emphasizes the voluminous book collection of John Adams, John Quincy Adams and their progeny as a stimulant to study with few stylistic diversions. It certainly worked for Charles, who edited 12 volumes of his father's memoirs, ten volumes of grandpa John's diary and the letters of grandma Abigail here. Their great-grandson Henry Adams wrote his nine-volume U.S. history here and recatalogued the books, and his brother Brooks Adams published six works he had worked on here.

The four solid walls of books reaching the roof — entailing running balconies for exploration of the upper echelons — clearly express the desire for undistracted study and higher learning John Quincy stated in a 1776 letter to his father at age 9:


"My head is much too fickle. My thoughts are running after bird's eggs, play and trifles, till I get vexed with myself. Mamma has a troublesome task to keep me a studying. I own I am ashamed of myself. I have but just entered the third volume of Rollin's history, but designed to have got half through it by this time. I am determined this week to be more diligent."
(Source: John F. Kennedy, Profiles in Courage)

The library is an integral part of Peacefield (1731- 1850s), the Old House where John and Abigail, John Quincy and Louisa, Charles Francis, Henry and Brooks Adams all lived. The Georgian wooden Old House and the Gothic Stone Library stand perpendicular in stark stylistic contrast, reflecting the changing tastes of the Adams generations.

Yet the are well unified by their sloping slate roofs and the 18th-century-style garden of annuals and perennials Abigail meticulously planned and her descendants fastidiously tended — which extends seamlessly to the ivy that almost obscures the library, alluding to the Ivy League (Harvard) all the Adams men joined. The buildings also work together as a living presidential library of books and papers on many scholastic subjects and museum of fine art and furniture that connect us directly with the Adams' political, social, intellectual and artistic aims, as John expressed to Abigail in a 1780 correspondence:


“I must study Politicks and War that my sons may have liberty to study Mathematicks and Philosophy. My sons ought to study Mathematicks and Philosophy, Geography, natural History, Naval Architecture, navigation, Commerce and Agriculture, in order to give their Children right to study Painting, Poetry, Musick, Artchitecture, Statuary, Tapestry and Porcelaine.” (Source: National Park Service)

Too bad this first presidential library and museum failed to set a good example for subsequent ones, which became more and more like mass-appeal expo centers and cultist circuses as time, taste and history evolved.

For instance, the 2005 Abraham Lincoln Presidential Library and Museum in Springfield, Ill., designed by HOK (the largest U.S.-based architecture-engineering firm), comes across as a corporate convention center or suburban shopping mall on first glance, despite its token integration of the Lincoln Memorial's colonnade and the White House's peristyle bowfront into its street front.


The White House front (minus the Truman balcony, for historical correctness) is even replicated in full form in the Museum Entry Plaza, making the outside pavilion a lead-in to the main attraction, assuring us we'll get our history and not be as bored as the building looks. Yet this faux façade's plaster- cast pomp emits a Disneyland effect, like the Oval Office repros found in most every presidential museum.


As does the tableau of the Ford's Theater Presidential Box. Wax-museum mannequins of Abraham and Mary Todd Lincoln, innocently absorbed in Our American Cousin, and John Wilkes Booth, surreptitiously sneaking into the box from the back, attempt to capture the moment before Booth's bullet blew Abe's brains out April 14, 1865.

This is one of many features in what the museum website calls "the first Experience Museum of its kind." Archival research and architectural archaeology, aided by leading Lincoln scholars, wrought detailed stage-sets and multimedia extravaganzas from the latest in theme-park technology, high-tech video, surround sound and special-effects synergy. From Lincoln's log cabin to Mary's fashion-show ballroom to a whispering gallery of Lincoln cartoon contempt to the Emancipation Proclamation Illusion Corridor, the museum aims for the ultimate "Lincoln experience." This was praised by John R. Decker in the Journal of American History for how it "intelligently and compellingly uses visual culture to meet its mission as a public pedagogical institution" but panned by Southern Illinois University historian John Y. Simon for trivializing its topic as a "Lincolnland."


A more authentic Lincolnland can be experienced in the museum's Visitor Center, a renovation of the 1898 Springfield Union Station, which stands as a testament to the Transcontinental Railroad Lincoln spearheaded but did not live to see to its terminal. The reconstructed 110-foot castlelike clock tower recalls Lincoln's towering presence.


Inside, you really feel the President's presence in the soaring ceiling, suggesting his 6-foot-4 height; the cornice-topped doorways, recalling the stovepipe top-hat that made him taller still; and the space's courtlike but congenial calm, conveying his stately, courtly demeanor. It doesn't need a lot to say a lot about Lincoln.

Unlike the overstatement with which the Lincoln library-museum presents a man of understated manner, the Ulysses S. Grant Presidential Library is understated in its memento of a man who was much more over-the-top, both as Lincoln's Commanding General of the Army and as President. Buried deep in the lower level of Mississippi State University's Mitchell Memorial Library, the Grant Library is modest in its introduction: a simple space of lithographs, photographs and other Grant collectibles precedes the collection's "15,000 linear feet of correspondence, research notes, artifacts, photographs, scrapbooks, and memorabilia" and "4,000 published monographs on various aspects of Grant's life and times" — edited as The Papers of Ulysses S. Grant by none other than "Lincolnland" critic John Y. Simon, who clearly knew something about moderation in presidential presentation. Also, Lincoln biographer Benjamin P. Thomas described Grant as a "quiet, retiring man," a quality encapsulated in this space's somber, studious atmosphere.


But if Grant's grandiosity is what you want, it's what you'll get in the real Grant's Tomb (1897) in New York City. Designed by John H. Duncan, this monumental mausoleum's Capitol Dome-esque rotunda, Lincoln Memorialish temple front and dive-bombing eagle duo grandiloquently introduce a sublime stairhall to a coffered dome illuminated by an in-the-round Ionic colonnade, embellished with eagle-wings and other ornamental opulence, and cloverleafed with coffered arches. This forms a celestial canopy for the polished black sarcophagi of General and Julia Grant, with bronze busts of Union Army Generals McPherson, Ord, Sheridan, Sherman and Thomas looking down on their leader and his lady.

How's that for a Greco-Roman tribute to King Ulysses?

Built in 1916 in Fremont, Ohio, as America's first formal presidential library, the Rutherford B. Hayes Presidential Center got that tradition off to a poor start by being more mausoleum- like than the one for Hayes' predecessor above. Yes, this window- less non-building could be a fitting tribute to a non-President (his foe, Samuel Tilden, won the popular vote).


But its faceless front is no friendly intro to Hayes' exquisite summer retreat, Spiegel Grove (1860- 1889), a Victorian brick mansion with gabled roof and Italianate wraparound porch, exhibiting books, artworks and other Hayes heirlooms. Here, Rutherford and Lucy Hayes enjoy a privilege the Grants were denied: burial in their own grove, along with Hayes' warhorse "Old Whitey."

For details, see Part II of this post (link here)...