Power and pallor in presidential libraries and museums — Part II

The William McKinley Presidential Library and Museum (did you say "mausoleum"?) in Canton, Ohio, looks even deader, like a '60s college campus design dinosaur. But it makes up for its mediocrity with a presidential museum rarity — a science center with wildlife, fossils, electricity demos, a planetarium, a "Fascination Station" robot exhibit, and, yes, dinosaurs!

Its cathedral window arcade may be giving a token reference to the Greco-Roman temple front of McKim, Mead & White's National McKinley Birthplace Memorial (1915-1917) in his home town of Niles, Ohio: “Seen from the approach on Main Street, the building will be dominated by its central feature, a colonnade or propylaea leading into a court of honor.

"It is this court, the atrium of the old Roman palaces where the statue of the household god stood, which is to be the climax of the entire structure.” (The New York Times, Jan. 17, 1915)

J. Massey Rhind's McKinley likeness, erect at a stance almost as rigid as an ancient Egyptian Pharaoh statue, does exert godlike dominion over the Georgia marble court of honor, extolling the steadfastness with which McKinley declared victory in the Spanish-American War, acquired Puerto Rico, Guam and the Philippines from Spain as part of the peace settlement, annexed Hawaii, raised protective tariffs to promote American industry, and defended the gold standard in the face of William Jennings Bryan's "You shall not crucify mankind upon a cross of gold" speech advocating free silver coinage instead.

One of many McKinley statues to crop up across the country after his assassination, it's a typical pedestalization of a fallen president as a monumental might-have- been, akin to the frenzy of John F. Kennedy memorial-building, bust-casting, half- dollar minting, and school and airport renaming that followed his fall. So this museum-library-statuary complex, classically handsome and awesome and eye-filling as it is, is a bit overdone. 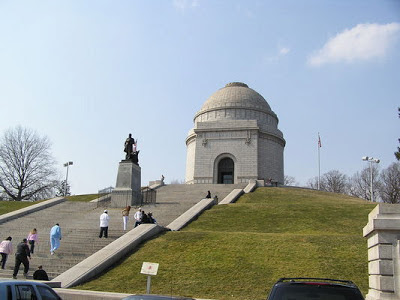 But the McKinley National Memorial (1907) in his second home town of Canton, Ohio, is a more modest affair (making Grant's Tomb also look overdone). Designed by Harold Van Buren Magonigle, this mausoleum (a real one this time) for McKinley's body sits on a site he often visited, and for which he recommended a war memorial for Stark County soldiers and sailors. Commanding its hill with the strategic surety of a Civil War major (which McKinley had been) and the scientific certainty of a planetarium (maybe the McKinley Museum's one should be here!), it tempts us up the long, high stair and through the Roman-arched portal to share a personal moment with McKinley inside, in more of the intimacy of a yurt than the grandiosity of a court.

The McKinley statue on the stair is also more true-to-life than his Birthplace Memorial's stick figure. Sculpted by Charles Henry Niehaus, this likeness was modeled on a photo of McKinley snapped by White House photographer Frances B. Johnston at Buffalo's 1901 Pan-American Exposition shortly before he was shot there. Speaking of which... 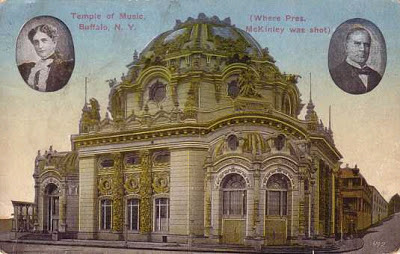 ...the mausoleum is also a memorial to the expo's Temple of Music, in which anarchist Leon Czolgosz gunned down the President on Sept. 6, 1901. The temple's crowned dome, arched door, square fronts and stone blocks are recalled in the Memorial in a more mournful, less majestic way.

From Thomas to Thomas

The white classical columns, entablature and fretwork balconies, the black window shutters and the red brick walls that bestow scholarly distinction on the Pavilions of Thomas Jefferson's University of Virginia (below) do the same honors for Thomas Woodrow Wilson's Birthplace and Presidential Library, a.k.a. The Manse (1846, left), in Staunton, Va.

As a UVA alumnus, a Princeton University president, and the only U.S. President with a Ph.D., Woodrow Wilson deserves these academic architectural attributes, which also express the intellectual rigor he brought to postwar peace propositions: the Treaty of Versailles ending World War I, his Fourteen Points, and the League of Nations that preceded the United Nations. 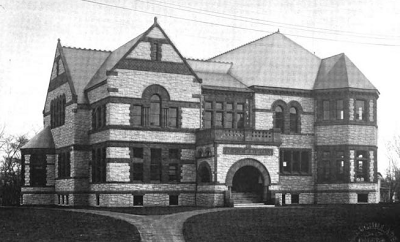 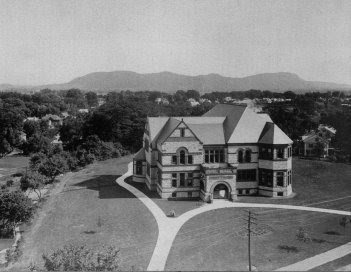 But the early 1890s public library is given a quiet location, a rural setting in Northampton, Mass., where Coolidge practiced law in his youth and retired after his presidency. Indeed, Coolidge's contrasting characteristics are shown here: the building's boldness expresses his outspokenness in his speeches as Northampton mayor, Massachusetts governor, vice president and president, while its setback site suggests his withdrawn state in private social settings. 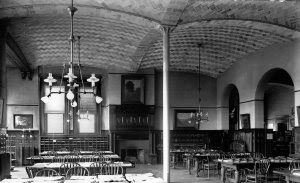 The quiet atmosphere of a public library, too, befits Silent Cal's thoughtfully taciturn personality in private, while the building's grand arches, Guastavino tile vaulting and decorative accents allude to his flamboyance in the political arena, as well as his conservative, traditionalist values. 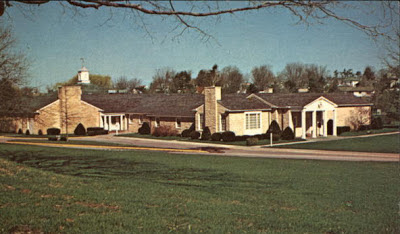 In contrast to the country-manor class accorded the Calvin Coolidge collection, his successor's Presidential Library and Museum in West Branch, Iowa, was a rustic ramble of neocolonial nostalgia when dedicated in 1962 by Harry Truman and Herbert Hoover himself. 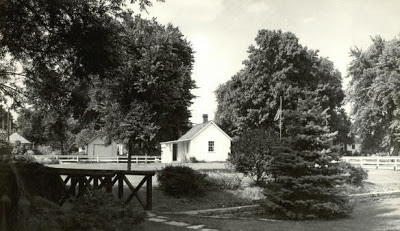 Intended to blend with the bucolic charm of the country cottage where Hoover was born in 1874 (left), the new complex ended up resembling a roadside restaurant like Friendly's or Howard Johnson's in its use of the rugged flatstone and fake colonial facings that were fad at the time.

Similarly, Ronald Reagan rededicated the building in 1992, following its $8 million facelift and expansion, with a new porch, multipaned windows and French doors typifying the tacky postmodernism of Reagan's era of excess.

For details, see Part III of this post (link here)...