When preliminary renderings of the George W. Bush Presidential Center at Southern Methodist University in Dallas were first released, I posted one on the Boston Society of Architects' LinkedIn profile page for discussion. One architect said it resembled "a very badly designed mausoleum."

I couldn't agree more, now that this architectural aggrandizement of Dubya's dominion — encompassing a library, museum, policy institute and repository for more than 70 million pages of papers, 200 million e-mails, 4 million digital images and 43,000 artifacts — was dedicated on April 25 amid fanatical fanfare and rah-rah reexamination of a loathed-in-his-lifetime president.


...in favor of boxy banality, confused composition, and cold comfort on the campus. How pathetic that master architect and architectural historian Robert A.M. Stern, dean of the Yale School of Architecture, could cook up something this dead, dreary and dungeonlike.

More than a mausoleum, it has the aura of an urn burial for the casualties of Bush's War on Terror, a detention facility for Guantanamo Bay's torture victims (which Bush denied), or a courthouse where an impeachment trial should have been held for Bush's war crimes — especially the "weapons of mass destruction" lie that triggered his Iraq War (not mentioned at the dedication). 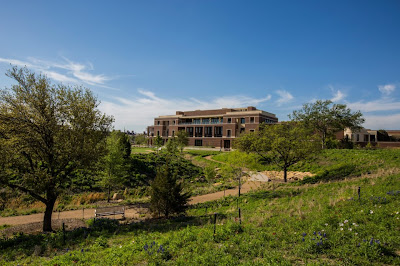 The grounds do reek of a war zone. Their dense groundcover, rugged terrain, broken stones and sparse trees don't lay out an inviting green carpet to the Center. This isolates it on its hill, as if it's entombing unknown soldiers or ignored innocents who died in W's double-whammy war in Afghanistan and Iraq.


How sad (and ironic) that distinguished landscape architect Michael Van Valkenburgh took on this task, and that he hails from Cambridge, Massachusetts — a major liberal nemesis of Bush's stolen "election" in 2000 and razor-thin return to power in 2004, and a spawner of both of his campaign rivals, Al Gore (Harvard Class of '69) and former Massachusetts Senator John Kerry.

Yet a Cantabrigian's blessing of Bush Country could symbolize the setting aside of differences presidential library dedications tend to force in old Oval Office adversaries, as shown by the praise Jimmy Carter, Bill Clinton and Barack Obama (not to mention George the Elder) heaped on Bush at the ceremony after chastising him in other necks of the woods.

The building also typifies Stern's mix-and-match approach to architecture: edifices that appear patched and pieced together from kits of parts taken from postmodern pattern books. This gives the Bush Center awkward massing, a nondescript identity, an unfriendly face and an austere enticement to enter. ("Stern" is right!) 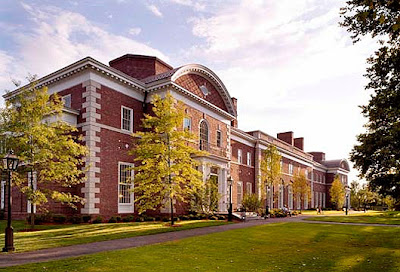 What a shame, since Stern showed his stuff with historical style in his Spangler Center (2001) at Harvard Business School in Allston, Mass. He designed this dining, study and lecture hall in perfect compatibility with HBS's 1920s Georgian Revival campus to look like it had been part of it from the start.

"The Spangler Center was conceived to give a new heart to the Business School, which had been atomized over time by many buildings and an increasing number of students living off campus," Stern himself said in the HBS Alumni Bulletin. "From the day it opened, students adopted Spangler as their own.” Stern did just the opposite with the distant, heartless Bush Center.

It does bear a slight resemblance to Building One of the Food and Drug Administration's White Oak Campus in Silver Springs, Md., built c.1950 as the Naval Ordnance Laboratory. 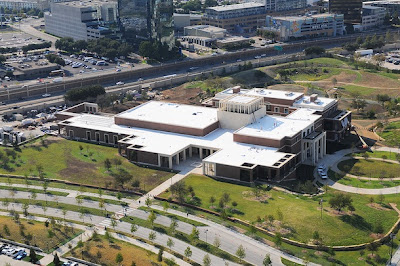 But Building One's balanced symmetry isn't there. The placement of the library and Institute parts at a 9oº angle to each other knocks each of their façades lopsided in a push-and-pull polarity between the building functions — alluding to the ongoing clash of the two wars Bush left unresolved. 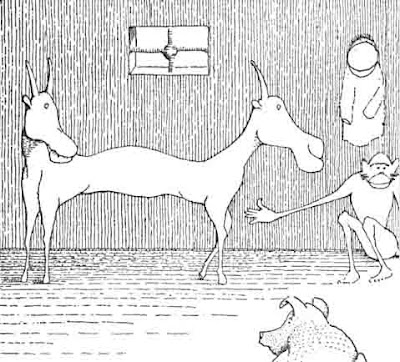 This recalls the Pushmi-Pullyu of Doctor Dolittle fame, as described by Hugh Lofting: "...no matter which way you came towards him, he was always facing you. And besides, only one half of him slept at a time. The other head was always awake and watching. This was why they were never caught and never seen in Zoos." A fitting description of Janus-faced George W. (doesn't the monkey in the picture look kind of like him?), asleep to negative popular opinion about his wars and their mass murder of civilians, yet awake to his war-aims with red-eyed resolve, deceitful denial and pigheaded pride ... and never impeached, removed from office or sent to jail, due in large part to Washington's persistent gridlock over the war, which the irresolute interlock of the Bush Center's two faces suggests as well.

The flat-top lantern crown gives the façades superficial symmetry and synthesis but denies the building a distinctive signature (like the veto pens of Papa and Junior Bush). Thus the library's Frankenstein front feels dungeonlike. Black iron grills and window grids reminiscent of prison bars and portcullises starkly contrast the light limestone and lantern.

The crown is a skylight lantern for the 67-foot- high Freedom Hall, an atrial manifestation of the determination "to expand the reach of freedom" Bush boasted about at the ceremony. The cage-like French windows don't exactly express "freedom" despite their view of the south skyline of Dallas (JFK's assassination site, don't forget). 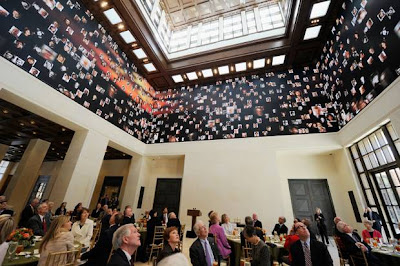 The 360-degree LED high-definition video panorama of constantly changing images of Americana compensates for the hall's cold, cubical rigidity at the aesthetic level of a kiddies' planetarium show. The lantern itself, despite its fine pecan paneling and beacon-like night lighting, is no match for...

...the lantern of H.H. Richardson's Trinity Church in Boston (1877), where fine art frescoes, clerestory windows, gilding and paneling unite in a "Light of God" soar of space as a spiritual uplift to higher ideals. Light and shadow, solid and void, wall and window work together, unlike Freedom Hall's jarring contrasts of dark and light and use of artifice in place of art.

Speaking of skylights, this lit-from-above steel "sculpture" of remnants of the wreckage from the World Trade Center's Sept. 11, 2001 terrorist attacks is a moving moment in the museum. Their mangled, bent state convey the chaotic horror of the mass destruction. As twin steel supports appearing to embrace, they allude to both the Twin Towers' collapse and the human need to reach out to each other for support in such tempestuous times. Their near- rectitude denotes the need to stand tall, firm and united in the wake of a threat to one's liberty and integrity, as Bush's demeanor aptly conveyed despite his reckless reaction. 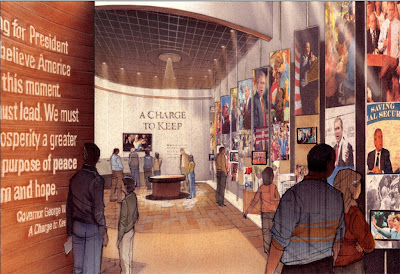 But much of the museum is self-congratulatory hyperbole calculated to vindicate Bush for his crimes, denials, lies and leaving it up to his successor to mop up the mess he left behind: ongoing Middle East turmoil, the largest national debt in American history, the worst recession since the Great Depression.

This lionization of a liar is in lockstep with today's reduction of political discourse to simplistic clichés and catchphraseology: "A Charge to Keep," "Either you are with us, or you are with the terrorists," "No Child Left Behind" (here framed with the hackneyed Little Red Schoolhouse to mask the dubiousness of that program's effectiveness). 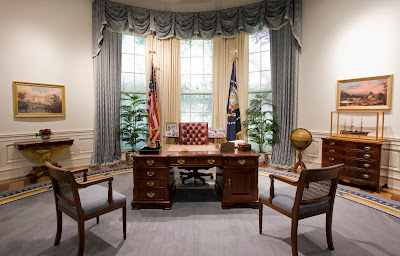 Speaking of fakery, the Bush Center boasts a full-scale replica of the Oval Office in the White House (with a "Resolute Desk" visitors can sit at to act out Bush's "resolve"). However, this is a standard fixture in most presidential museums, to give guests the next best thing to prattling with the President in person. (And, unfortunately, this tacky traditionalism can mar the modernism of a masterwork like the John F. Kennedy Library and Museum in Dorchester, Massachusetts, with a dose of Disneyland.)

These wings take you into a dreamworld of deception where you forget the carnage and corruption of the Bush administration and focus on the fantasies of family and freedom that rang in his rhetoric. His stalwart stubbornness, die-hard defensiveness, and impersonal indifference to innocent death and detention are articulated in the rigid, cold, stark, drab design of the George W. Bush Presidential Center.