Living near the lair of the Boston Bomber 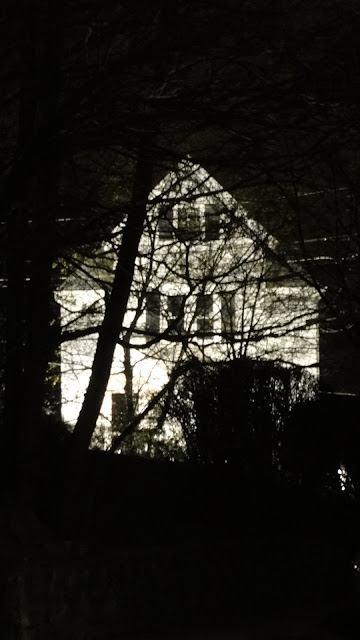 I was huddled in my Watertown apartment only two blocks away from the final foxhole of Boston Marathon bomber Dzokhar Tsarnaev as cop cars, SWAT teams, state troopers and TV news trucks choked up Mt. Auburn and Franklin streets with a maelstrom of mayhem unimaginable in this quiet suburb, smoking the suspect out of the bloody boat he'd holed up in at the house pictured here.

It's curious how an ordinary dwelling takes on an eerie edge when a terrorist invades its territory. Suddenly its windows become watchful, its shutters sharp and shadowy, and it's forever branded as "the scene of the crime," a "haunted house" high above the Halloween horror level. Indeed, this old house's spooky spotlighting for police stakeout and news coverage purposes gave it a ghostly grimness against the dark (and the heat) of the night. 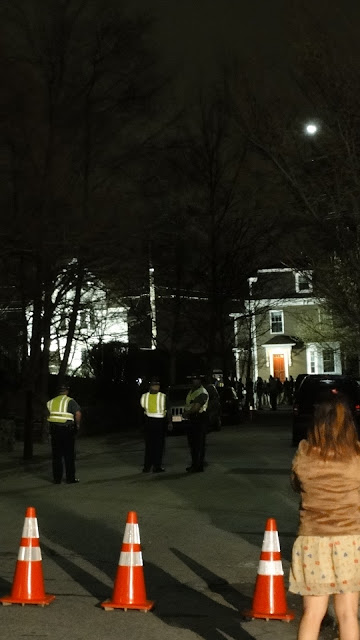 An enclave of elegant Victorian homes became a trooper turf of cars, cones, cordons and cops as they closed in on the boated bomber with the cry, "Come out with your hands up!" ending a massive manhunt that had put greater Boston in a lockdown where no one dared venture outdoors.

I was careful to couch behind the walls of my Victorian home (they built 'em thick back then), lest a gun battle like the one that had finished off Tsarnaev's older brother Tamerlan ten blocks away rock the night air and pop bullet holes in my hideout. But the red and blue lights flashing and sirening all over the street assured me of substantial safety while tightening the tension of the close-in climax.

A rally of cheers and chants suddenly snapped the suspense and sparked the air with the voice of victory — the sign that it was safe for me to go out and join the jig-is-up jubilee. 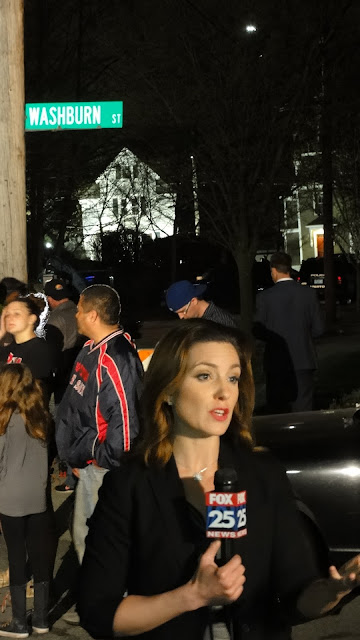 As celebration cooled into conversation and Fox 25 News Correspondent Molly Line (left) recapped the revelrous reaction to the roust-out, the houses hardened into a new night-piercing identity. Their architectural forms, facades, lines and details became sharper and keener, as if to heighten our awareness of our surroundings lest terror trespass again, or as a result of the increased vigilance of their neighborhood the fear of the situation forced upon us.

Which caused me to notice and appreciate the Victorian beauty we often overlook as we whoosh past it on our way to work, or as we grovel the ground or stare into space while engrossed in elsewhere. Now I eyeballed every nook, cranny, bracket, turret, porch, alcove and alleyway for potential danger, no longer secure in the serenity of stately architecture. Now it evoked the morbid omen of Norman Bates' mansard mansion in Hitchcock's Psycho.

More ominous architecture in Boston and beyond... 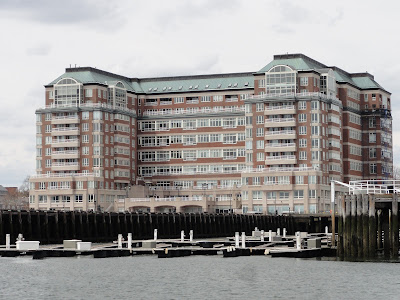 Flagship Wharf at the Charlestown Navy Yard, a World War II radar research and operations center turned luxury condo, takes on a similarly sinister air, on account of the high crime its front penthouse units are associated with, however indirectly. Their eyebrowed sea-stare evoke the piercing-eyed criminality of Frank Costello, Jack Nicholson's mobster character in Martin Scorsese's The Departed, who lived in the left-hand penthouse in the film; and Osama bin Laden, whose distant relatives resided in the right-hand one while attending school in Boston. (The FBI and police escorted them from their enviable student luxury loft on Sept. 12, 2001, and flew them home to Saudi Arabia for their protection, in the only commercial flight then allowed in America on account of the previous day's airplane attacks on New York's World Trade Center.) Costello was modeled on real-life Boston mob boss, mass murderer, money-launderer, drug trafficker and racketeer James "Whitey" Bulger (who in real life didn't live that lifestyle — when arrested in Santa Monica, Calif., on June 22, 2011, he was residing in a rent-controlled apartment with more than $800,000 stuffed into the walls and weapons everywhere). Flagship's wide-eyed, forward-thrusting units appear to be on the lookout for danger in the distance, in anticipation of future crimes of those heights.

As does this towering Beacon Hill apartment house at 44A Charles Street, where the alleged Boston Strangler murdered Mary Sullivan on January 4, 1964, as his 13th (!) and last victim.

Here is another example of how architectural details seem to become neighborhood-watch elements the moment a crime changes their building's identity forever. This one rises above its neighbors and its bay window bumps outward for a keener, more panoramic bird's-eye view encompassing the area. The stucco skin signifies the safety and shelter the inhabitants seek from perpetrators.

Apart from the ground-floor restaurant, this building looks almost as it did on the day of the crime, according to On This Very Spot, as if the owner wanted to preserve the memory of the murder and victim for the tourist trade that wants to retrace the Boston Strangler's steps.


Here's another site where the Strangler struck: an early 20th-century Georgian Revival apartment building at 4 University Road near Harvard Square in Cambridge.

The solid brick facade with rusticated first floor and bold cornice conveys the safety and security that were compromised when the alleged Strangler stabbed 23-year-old Beverly Samans on May 8, 1963 (his 10th victim), in one of the units.

The brick-pedestaled entryway lampposts were added later, in the classic Cantabrigian style of Harvard's Georgian architectural tradition. This cosmetic gives the complex a "gated community" air, suggesting the solidity and unity of the building association against future crime attempts. The projecting bow of two- window rows articulates the all-eyes vigilance on the street needed to stop stranglers.

Gainsborough Street in Boston's Fenway really does have that vigilance now — a midnight patrol security guard salaried by the street's condominium association — in light of the sexual molestation and bathrobe cord strangulation of 55-year-old Anna E. Slesers, the Strangler's first victim, on June 14, 1962 here at 77 Gainsborough Street (since changed to No. 79, presumably to protect the innocent).

This building has mopped up the blood nicely (notwithstanding its blood-red brick facade), recasting itself with the debonair of a Beacon Hill/Back Bay style townhouse complete with English garden, bracketed pediment, dentil cornice, limestone lintels and stringcourse, and bow window, which has more of the hawkeye circumspection of the bays in the above buildings.

The building below covers up the Strangler's sins more thoroughly: it is a single-family replacement for the apartment house at 73 Newhall Street in Lynn where 65-year-old Helen Blake was sexually molested and strangled with her nylon stockings around June 30, 1962, as the Strangler's fourth prey.


It seems deliberately designed to look older than it is to erase the site's murder memories. This quasi-Victorian Shingle Style farmhouse with 2-over-2 windows, wraparound porch, lawn and picket fence appears to predate the Boston Strangler by 100 years, extolling the pre-crime innocence we all crave after the shakeup of our neighborhood.

I'd certainly feel comfortable living near there.