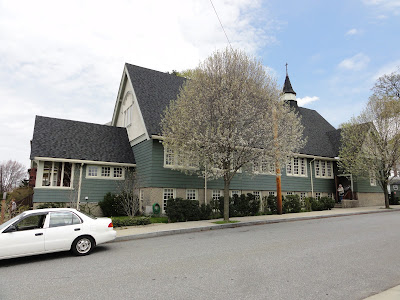 With Easter on the horizon (March 31 — so early!), I'll be in my third year of Easter choral singing at the North Prospect Union United Church of Christ in Medford, Massachusetts. So I thought I'd explore how the simple charm of this World War I-era Craftsman gem achieves its religious aims without the ornamental opulence of a typical church. 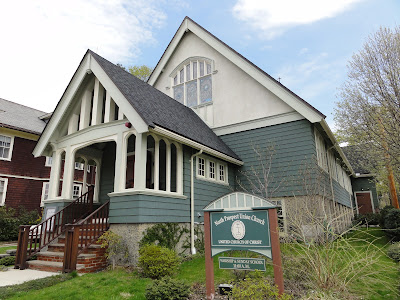 Bereft of the gilded crosses, diapered walls, carved woodwork, alabaster altar, marble floor, floral capitals, vaulted ceiling, painterly frescoes, iron scrolls, plaster angels and stone statues of saints historically deemed sine qua nons for Sundays with the Savior, this "Church of Crafts" is blest with bare-bones beams and rafters, wood casings and floors, plain white walls and simple sash windows, as an architectural expression of the organic quality of their natural resources, the modest humility that characterized Jesus — not to mention the carpentry he practiced back in Nazareth, and the message to "do away with pomp and gold, and all thy vain display," as went a Dietrich Buxtehude hymn I sang as a choirboy in St. Paul's Cathedral in Boston. 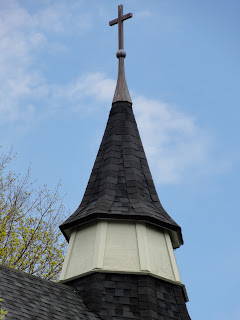 That's how North Prospect Union proves that a house of worship needn't be a bedecked basilica, a colossal cathedral, or a holy-Toledo temple to foster a congregation's communion with Christ and union with one another, as that kind of flamboyance can be as much of a visual distraction from those goals as an architectural image of the City of God. Even the stump of a steeple (left) extols the church's humbly-before-the-Lord diminution, unlike the archetypal bell tower that takes front-and-center stage, reaches for the heavens and becomes the church to signify its sacred function and sound off its summons to Sunday service throughout the neighborhood. Instead, this one lowers its pride and takes a back seat, visually deferring to the main church and its prominent portico as the chief caller to worship. 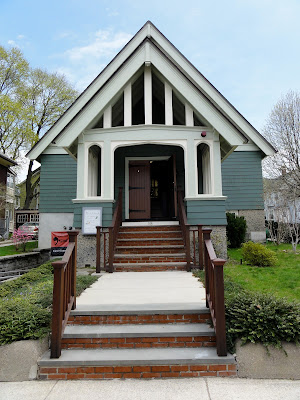 I was glad when they said unto me, We will go into the house of the Lord.

The gable does give house form to the church, as a human-scale symbol of the common folk coming from their homes to worship there (and feel at home in God's house) rather than the supreme symbol of God Almighty a church seeks to be by rising above its neighborhood. The portico's gable parallels the main one, casting the portico as an aedicula of the house of worship to come, an intimate shelter that brings the congregation closer together under one roof than a cathedral vault can do. The portico's small paned windows and open screen of posts lend clues to the simplicity of the structural and fenestral features we'll experience inside... 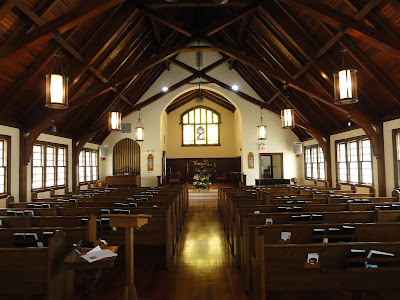 "...there is the open charm felt of the structural features which are not hidden under plaster and ornament, but are clearly revealed, a
charm felt in Japanese architecture."

This Craftsman guru was a stickler, indeed, for sticks-and-stones simplicity and sincerity in building structure.

The posts, beams, rafters and purlins here are symbolic as well as structural, as an honest expression of not only the roof's means of support and the tree limbs from which they came, but also the cross on which Christ was crucified, and the weight of it he had to bear while carrying it. The heavenward soar of the main beams with the ascent of the roof represents the Resurrection (timely for Easter), contrasting the heft of Christ's cross and the loft elevation of his ascent to Heaven. The simple windows and walls give the church more of a "house" feeling and add to its lofty lightness in a Japanese vein, contrasting white walls with dark support members. 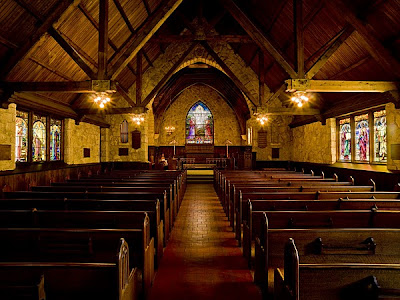 I couldn't resist comparing North Prospect Union with
the Chapel of the Transfiguration in Bretton Woods, New Hampshire, where I sang Sunday services with St. Paul's Cathedral Choir (alias the Bretton Woods Boy Singers in the summer) in-between our pops concerts at local resort hotels in the summer of '73. 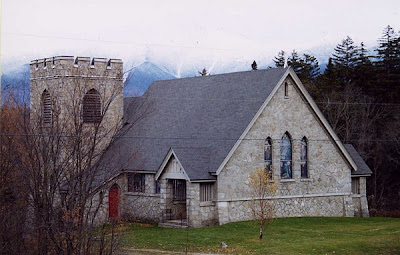 The truthful revelation of the load-bearing wood members is in full glory here, too, as are the houselike gable, the grand arch setting off the raised chancel as the sacred section, and the triple windows alluding to the Holy Trinity. The interior exposure of the random ashlar stone that built the building (right) complements the knotty, gnarly beams for an organic effect that is more weighty and cavernous (like Christ's cross and tomb) than North Prospect Union's airy lightness. But here the proliferation of stained glass compromises this effect with showy art as opposed to simple craft, for a more churchy, less homey atmosphere. (Also less homey were the hard-as-a-rock kneelers we choirboys had to endure between our hymns and anthems.)

Windows on The Word 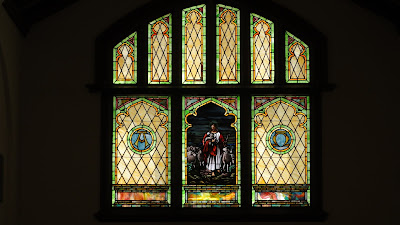 North Prospect Union limits its stained glass to the chancel and choirloft to assign sanctity to these spaces, keeping the glasswork simple, too. The chancel window depicts Jesus as a shepherd, enticing worshippers not to stray from him like sheep. 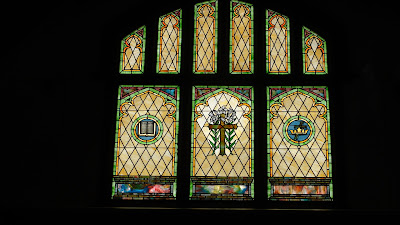 The choirloft window contains basic symbols of the Holy Trinity: the Bible (the Word of God), the Cross (the Son of God), the Crown of King Jesus. Tiffany-style flourishes offset the austerity with colorful movement — or represent earthly distraction from heavenly aspiration.

'Tis the gift to be simple 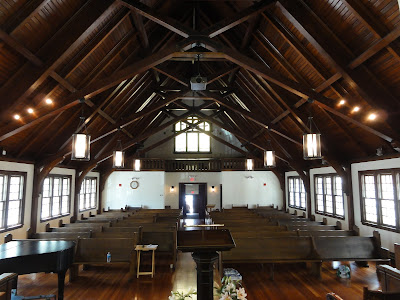 When true simplicity is gained,
To bow and to bend we shan't be ashamed,
To turn, turn, will be our delight,
'Til by turning, turning, we come 'round right.

The church's relative barrenness does encourage the congregation to turn toward each other rather than be led astray by this statue, that painting, this capital, that pattern, and to "bow" before the minister at the lectern (the slanting and meeting of the beams do have that effect of bowing, bending, and turning toward your neighbor), because, without visual diversions to cause roving eyeballs, he is now the front and center of your attention, as well as the people sitting next to you. 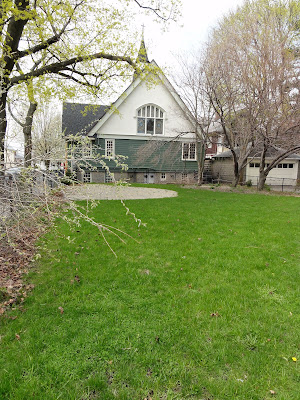 The Lord is my shepherd, I shall not want.
He maketh me to lie down in green pastures.

The chancel window's shepherd theme continues in the back yard, which suggests a shepherd's field, setting off the church as a distinctive identity and remote refuge from civilization. The green wood-shingle exterior, evocative of both the leaves and the limbs of the trees producing the shingles, unites the church with its greenspace to form the "Union" of its name. The building benefits from its street's slope, which elevates its entrance to give arrivals a sense of aspiration to a higher state of being, and grants it a ground-level yard for the convenience of outdoor coffee hours, cookouts and kids' play, as a heaven-and-earth dichotomy. 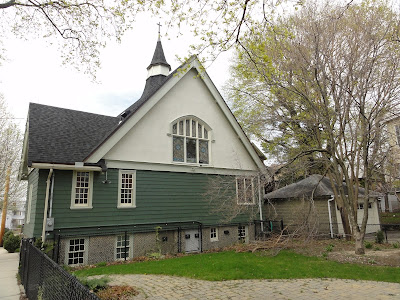 Which could be another reason for the steeple's relegation to the rear: to blend it with the yard as a unified symbol of Jesus' death (the ground of his burial) and resurrection (the steeple pointing to heaven). Or perhaps to obscure the steeple from street views to convey that no one bore witness to the Resurrection, until four women went down into the tomb and saw his body was missing.

North Prospect Union United Church of Christ's Craftsman architecture enables it to live up to its name — as a union of equally simple parts, a uniter of its parishioners, and a symbol of the spirit of its namesake that doesn't rely on so many "graven images" of him to allow its congregants to feel his presence. Thus it honors Jesus Christ's humble origins as well as his heavenly end.

Thank you for visiting. I welcome your comments!
there is the open charm felt of the structural features which are not hidden under plaster and ornament, but are clearly revealed, a charm felt in Japanese architecture. - Gustav Stickley