Before Transamerica: Coit's command of California

Wait — not so fast. Before Transamerica's pointed poignancy pierced through San Francisco's low-scale landscape and crowned itself the city's signature spire and fortress of familiarity in 1972, the Coit Tower atop Telegraph Hill was San Fran's icon of identity, symbol of civic pride, and especially...

Coit Tower was built in 1933 on the site of the west coast's first telegraph line (1849) as a city beautification initiative from the will of philanthropist Lillie Hitchcock Coit, a volunteer firefighter in San Francisco since helping the shorthanded Knickerbocker Engine Co. No. 5 extinguish a fire on Telegraph Hill when she was 15.

The 180-foot reinforced concrete fluted column was designed by local architects Arthur Brown, Jr., and Henry Howard with eagle carvings and torus moldings at its base, an observation deck with skylights at its crown, and a stair and elevator through its shaft.

The observation deck, overlooking the city like a firewatch tower, aptly symbolizes Lillie Coit's eagle eye on the neighborhood, ever watchful for fires, especially when lit up at night before a fiery sunset (above).

The tower's architecture exemplifies the neoclassical-Art Deco combo of many of President Franklin D. Roosevelt's Works Progress Administration building projects, expressing the folk patriotism of the hard labor that built them as the WPA put more Americans back to work.


Like the Acropolis of Athens (above), the Coit Tower (right) gave San Francisco an Athenian quality in its evocation of an ancient Greek column ruin shorn of its capital, its command of the city below as a monument to high civic attainment, and its invitation to the populace to make the strenuous, laborious pilgrimage to that upper echelon of civilized society. Which we are about to do, so brace yourselves... 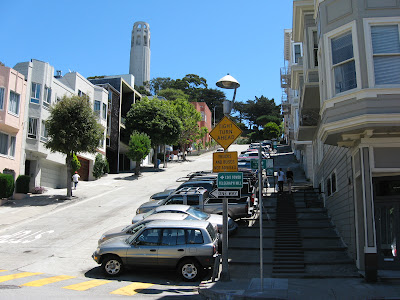 San Francisco's hilly topography is especially arduous on Filbert Street, the main route to the Coit Tower and — unfortunately for its pilgrims — one of the city's steepest streets, at a maximum gradient of 31.5%, or 17.5º, with no cable-car to ease the elevation.

Once it reaches Telegraph Hill, Filbert Street gets sooooo steep it transforms into a...

Here the streets of San Francisco become the steps of San Francisco. They carry us far and away from carhorn civilization, usher us through a heavenly Eden of a community garden cared for by local residents, and traverse Napier Lane and other picturesque footpaths and alleyways
as we pound the planks
on our painstaking pilgrimage to our
Mecca on the mount...

Now that we've made it to the top of Telegraph Hill, the sheer height of Coit's column makes its coming climb look domineeringly daunting indeed. But it's more of a friendly giant than it appears to be. It spares us the stairs by offering an elevator to its observation deck, decked out in the Art Deco spirit of its times:


But before we blast off, let's mull over the murals in the monolith's base rotunda...


Murals of the masses

Painted mainly by California School of Fine Arts (now the San Francisco Art Institute) students and faculty through FDR's Public Works of Art Project, these murals capture
the character of the commonfolk, their struggles to survive the slump, and their vivid visions of bolting the breadlines and walking to work. Here a postman, there a news dealer, here a cop, there a robber...


This effort was co-spearheaded by Ralph Stackpole, San Francisco's leading artist of the era, master of social realism, champion of the commoner. His "Industries of California" mural exalts the value of the farmhand, the sharecropper, the planter, the picker and the packer in preserving the Golden State's fruit, vegetable and grain industries and their importance in providing those workers with jobs.

Also supervising the murals project was Bernard Zakheim, whose "Library" mural conveys the process of creating the mural exhibition itself, emphasizing the labor forces and sentiments behind the effort.

This mural depicts Stackpole himself reading a newspaper headline announcing the 1934 destruction of Diego Rivera's Man at the Crossroads mural in Rockefeller Center, New York, for its depiction of then Soviet leader Lenin.

Coit muralist John Langley Howard responds accordingly in "Library" by grabbing a copy of Karl Marx's Das Kapital off a shelf while crumpling a newspaper in his other hand, as a power-to-the-people gesture of the prevalence of workers' movements over the political putdowns of such kingpins as Nelson Rockefeller, the lead opponent of Man at the Crossroads in his namesake's center.


Monument to the masses

No kingpins up here. Void of the heraldic hubris of war-hero statues atop colossal columns (e.g., Lord Hill's Column in Shrewsbury, England, and Nelson's Column in Trafalgar Square, London, below), Coit Tower is open- topped, open to the public ascending to survey the streets, spires, summits and seas of San Francisco, as king of all they survey for a day.

Unlike Lords Hill and Nelson, on Coit Tower the people are the statue, in the populist spirit of the murals.

Which makes the tower a true monument to democracy, a symbol of a collective effort to elevate the everyman to a higher level of dignity through hard labor, high hopes.

Unlike the beacon of bureaucracy below...

San Francisco's new kingpin, the pinheaded Transamerica Pyramid, decapitated the commoner's crown of Coit Tower with the corporate "Power of the Pyramid," as Transamerica's slogan puts it. At 850 feet, it was the tallest tower west of the Mississippi when topped off — but don't expect an elevator ride to its tippy-top, for it's no People's Pyramid.

Built just so to withstand earthquakes, it was reviled during its development, and was made the butt of jokes on a TV comedy special on architecture I watched in 1976 — especially in a Saturday Night Live-style "commercial" for a board game where the object was to build a scale model of Transamerica: "Hey, kids! How would you like to erect the tallest building in the city? You can, when you play 'BUILD 'EM HIGH!!!!!!!!!!!!!!!'"

(READERS: If you remember the title of that program, kindly let me know in the comments box below. Thank you.)