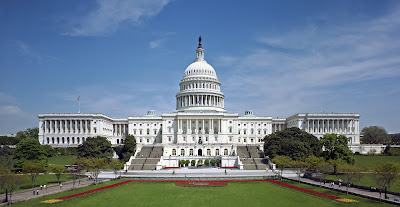 William Thornton, first architect of the U.S. Capitol in Washington, D.C., envisioned it as "a structure of noble proportions" that "the representatives of a very numerous people would one day require," according to Smithsonian magazine.

Yet, as I watched the TV broadcast of Barack Obama's second inauguration cut away to level shots of this imperial icon, I couldn't help noticing that its domineering dome seemed oddly out of proportion with its broad body — like an elephantine expression of the President's elevated ego. 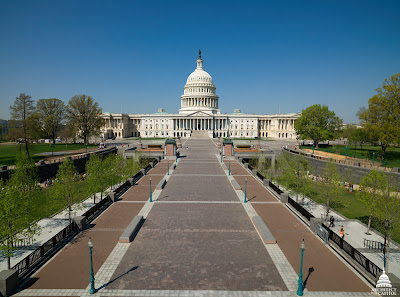 The reason is obvious: this is not the original dome — as unoriginal in design concept as it is to the building itself (see below) — but a tack-on by Thomas Ustick Walter in 1855-1863, concurrent with his expansion of the facility as a whole to accommodate a Congress that had grown with the Union. His heightening of the headhouse with a new dome to offset his spreading of the wings attempted to bring more balance to the building, lest Bulfinch's inaugural dome (see below) resemble a shrunken head in proportion to the puffed-out body. But Walter's replacement ends up looking more like a swelled head from this linear roofline perspective, as an expression of the presidential imperialism the office has become, rather than the congressional collectivism the Capitol had been built to embody.

Wren, in turn, was inspired by the coronary creation of Michelangelo and Giacomo della Porta atop St. Peter's Basilica in Rome (1626), the final manifestation of Emperor Constantine's cathedral vision to immortalize the martyrdom of St. Peter under the reign of Emperor Nero, as well as an ecclesiastical exultation of the Roman Empire.

This struck Walter's fancy, too, as did... 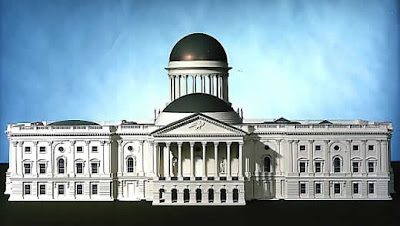 A far cry, indeed, from Thornton's original 1793 vision for the Capitol: a saucer dome in a unified composition with a pedimented portico like the original Roman Pantheon, backed by a hemisphere dome on a tall ring of columns, winged by manor-like House/Senate chambers.

President George Washington wholeheartedly endorsed Thornton's scheme for its "grandeur, simplicity, and beauty." However, Thornton's domeless North Wing was all that had blossomed on Capitol Hill by 1800, due to inept project management, strained labor relations, acrimonious loggerheads over the future of the nation's capital, budget and funding issues (naturally), and the slipshod construction that caused the semi-Capitol's foundations to give way at one point.


Likewise, Thornton's contract as Architect of the Capitol gave way to Benjamin Henry Latrobe, who had made his mark on America with the Bank of Pennsylvania and the White House's east-west colonnades. Latrobe saw the Capitol to near-completion with his custom columnar composition and the realization of Thornton's remaining wing, but couldn't make his dream dome come true either...

...especially after the British had decapitated the Capitol in the War of 1812. This entailed not merely the construction of a new headhouse, but, first and foremost, a postwar reaffirmation of national pride and endurance in the form of a dome more grand and graceful than either of the saucer schemes.

From saucer to teacup

Enter Charles Bulfinch, who had rebuilt Boston with the Federal finesse of a civilized society. Its pinnacle was his 1795-98 State House, where Governor's Council and Senate Chamber wings, center-entrance portico, colonnade balcony (screening the House
of Representatives' chamber), pediment and dome formed a seamless symbol of social unity and civility under governmental authority.

Which made Beacon Hill a model for Capitol Hill. Here Bulfinch unified Thornton's wings and Latrobe's pedimented colonnade portico with a dome that resembled an inverted teacup. Perhaps a tip of the hat to British teatime tradition as a post-War of 1812 peacetime gesture of reconciliation? More likely, Bulfinch designed the Capitol's first dome as a graceful head-to-body transition: the cup's "rim" curves outward and directs our eyes toward the wings, making the dome a part of a whole composition, not a self-centered solo turn. Furthermore, Bulfinch graced each of their wings with its own saucer dome, both as a coronary tribute to Thornton's and Latrobe's initiatives and as an authoritarian symbol of the Legislative branches' powers to impose checks and balances upon the Executive branch — which the domes do, in a well-balanced tripartite composition that keeps the central dome from appearing too haughty.

Now every component of the Capitol had its own crown, which unified the Capitol's composition as an architectural symbol of E Pluribus Unum ("Out of many, one") and the United States... until the building's outward expansion (above), concurrent with the nation's westward expansion, cried out, "Onward and upward!"

From teacup to coffeepot 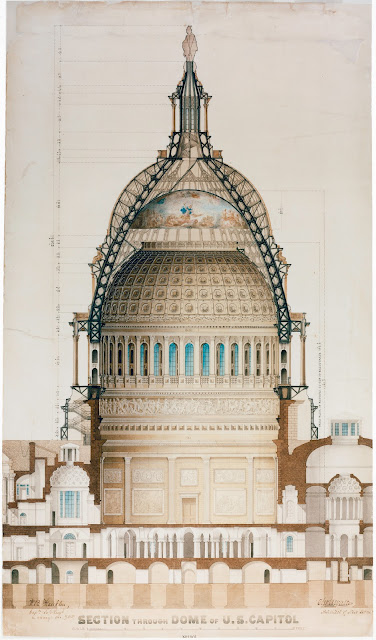 The cast-iron age that had made fireproofing and higher building possible enabled Walter to carry out his vision of, as Historian of the Capitol William Allen put it, "a tall, ellipsodial dome standing on a two-story drum with a ring of forty columns [reduced to 36] forming a peristyle surrounding the lower half of the drum. The upper part of the drum was enriched with decorated pilasters upholding a bracketed attic. Crowning the composition was a statue standing on a slender, columned tholus..."

This cast-iron dome-within-a-dome — fire insurance against future wars, no doubt — was reinforced by an internal cast-iron skeleton that allowed the interior dome, painted with Constantino Brumidi's fresco Apotheosis of Washington (1866), to rise 180 feet and the exterior dome, crowned by Thomas Crawford's Statue of Freedom (1863), to reach 288 feet. 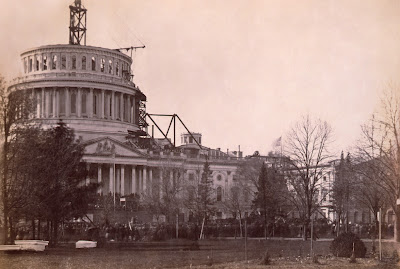 “...one of the declared objects for ordaining and establishing the Constitution was ‘to form a more perfect Union.’ But if destruction of the Union by one or by a part only of the States be lawfully possible, the Union is less perfect than before the Constitution, having lost the vital element of perpetuity.”
— Abraham Lincoln, First Inaugural Address, March 4, 1861

The unfinished dome
under which Lincoln had to take the oath of office fittingly symbolized the unfinished business that confronted him on the
eve of his first term as President of the United States: a fractured nation, thanks to the inauguration of Jefferson Davis two weeks prior as President
of the Confederate States
of America that had seceded from the Union over slavery, regionalism and other nationally divisive issues.

However, the topping off of the dome with the Statue of Freedom (above, left) in 1863 was to become symbolic of Lincoln's success at spearheading the Union's reunification and the congressional passage of Amendment 13 abolishing slavery in America two years later. Yet the dome was not completely finished until 1866, signifying the further business Lincoln left undone at the stroke of the assassin's bullet on April 14, 1865. 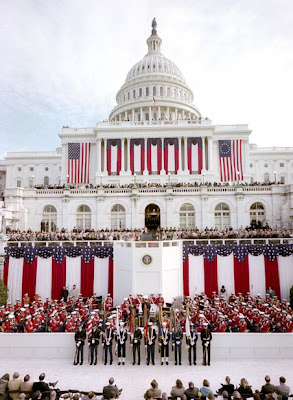 Which meant the dome wasn't yet in full ego-form. Its incomplete state represented an ambitious but scarred, humbled public servant of a President, in contrast to the commander-in-chief egocentricity of subsequent presidents the finished, oversized dome has symbolized in recent years — most notably the Cold War and War on Terror imperialism of virtually every modern president (with the possible exception of Jimmy Carter).

The capstone of the Capitol has become the building, as the carrier of its iconic postcard familiarity, a shrine of dominion over the land rather than democracy throughout the land. Thus it makes Bulfinch's wing domes appear belittled, suggesting congressional cowardice about holding the President's iron-handed rule in check.

Yet, arguably, the big dome's circular colonnades represent the Representatives and Senators therein, elected to uphold the freedom the Statue stands for.