The tower that stumped Boston 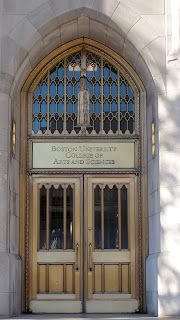 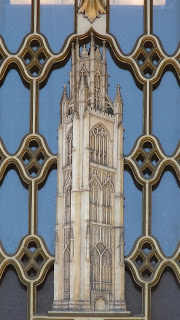 Did you ever notice the Gothic tower relief crowning your head as you entered any of the pointed portals of Boston University's Charles River Campus on your way to a class, lecture or meeting? Did you pause to ponder this symbol's scholastic significance? Did you dismiss it as frilly frippery? Did its sublime symbolism stump you? 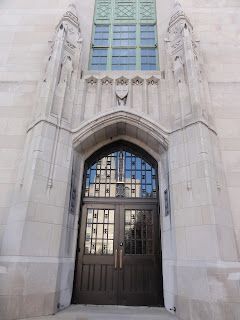 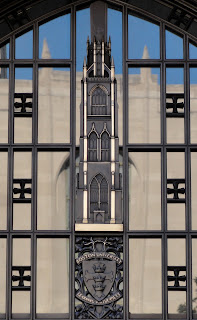 Think back about 700 years ago and 3,000 miles away to a small port town in Lincolnshire, England, a town first known as... 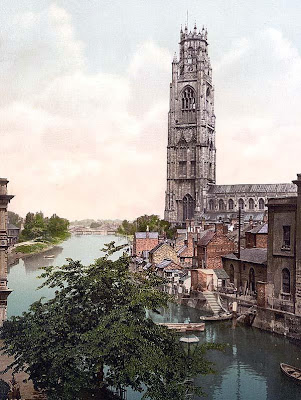 Gradually contracted to Bottleston, Botston, and ultimately Boston, this Norman-era settlement on the River Witham became the namesake of Boston, Massachusetts, when some of its natives settled there with John Winthrop and his Massachusetts Bay Company in 1630. Olde Boston's signature landmark was, and is, the tower of St. Botolph's Church, visible for miles across Lincolnshire's flatlands and wetlands. Named for 7th-century abbot Botwulf of Thorney, or Botolph — meaning "boat-helper" because he prayed for fishermen to have a good catch (he is also England's patron saint of travelers and farming) — St. Botolph's Church was built from 1309 to 1590 in the era's perpendicular Gothic style. Crowning its 242-foot bell tower is an octagonal lantern of pinnacles, finials and flying buttresses.

The planned construction of a spire atop the lantern was preempted by political upheavals leading to the Hundred Years' War and the formation of the Church of England — hence St. Botolph's Church's sobriquet, the "Boston Stump."

Cass Gilbert's "Cathedral of Commerce," the 1913 Woolworth Building in New York City, sparked a revival of fascination with the heavenly reach of the Gothic as an expression of the vertical soar of the skyscraper. This made the Boston Stump the perfect prototype for office skyscrapers, college towers and cathedrals across the country, as architectural expressions of upward mobility, academic achievement and spiritual attainment.

James Gamble Rogers' Harkness Tower at Yale University was one among many "Boston stumps" erected across the United States for commercial, collegiate or cathedral purposes, demonstrating the Stump's malleability when Gothic morphed into Art Deco with the changing tastes and times.
Others included Raymond Hood's Chicago Tribune Tower, Charles Klauder's Cathedral of Learning at the University of Pittsburgh, Hood's American Radiator Building (now the American Standard Building) in New York, and Ralph Adams Cram's Cathedral of Hope, or
East Liberty Presbyterian Church, in Pittsburgh.

Here, Cram gave the Stump its due: the spire. His strict adherence to the Boston Gothic in the face of modernism's forward-march made him a prime candidate for giving Boston
its due with...

Cram & Ferguson, in strategic alliance with Coolidge, Shepley, Bulfinch & Abbott and Boston University President Daniel L. Marsh, envisioned B.U.'s new Charles River campus as an expansive but intimate city-within-a-city of diverse Gothic buildings, unifying and expanding the College of Liberal Arts, the School of Law and the School of Theology around two quadrangles along the riverbank.

The signature landmark would be the Alexander Graham Bell Memorial Tower — the New Boston Stump — crowning Marsh Chapel, reflected on the river, boldly bespeaking Boston's transatlantic origins, and tolling the bell to the telephone's inventor, who had been a B.U. professor of vocal physiology at the time.

St. Botolph's compositional contrast between the vertical stump-tower's upward progression of lancets, flying buttresses and crests and the horizontal gable-chapel's repetitive regiment of buttresses, finials and stained-glass windows would be re-realized as the centerpiece of Boston University's hallowed halls of high academia, lofty learning and sublime scholarship.

Thus it would compete with Harvard and MIT for Charles River reverence, counterpointing their Georgian cupolas and classical domes with a Gothic tower.

Alas, like its English ancestor, political upheavals and war would stump the tower — but this time the whole tower, not the spire.

The new campus plans were announced in the Boston University News on October 24, 1928, but were stalled by the stock market crash precisely one year later, followed by the September 1939 Nazi invasion of Poland that initiated U.S. involvement in World War II.

Those fiscal fallouts ultimately scaled down the campus design to the stripped, simplified Collegiate Gothic superblocks, centrally connected by Marsh Chapel and its Gothic-arcaded cloister wings, as we know them today. Completed seven years after Ralph Adams Cram's death in 1942, they show the absence of his guiding hand. 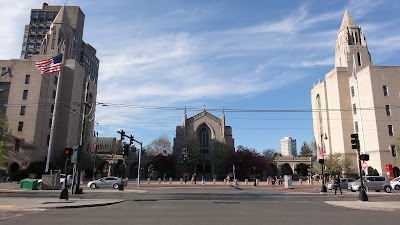 Marsh Chapel, the cloisters and the gateway towers seem to cry out for the Supreme Stump to fill the void and complete the link between the buildings and its link to the past. The towers would work best as a preliminary pylon announcing the main attraction...

...that is especially found wanting on the water, which reflects and extends St. Botolph's sublime soar but mirrors and magnifies the void left by the incompletion of B.U.'s Charles River Campus.

Knocking the campus's semi-symmetry lopsided with typical modernist irreverence for things past is Josep Lluis Sert's B.U. School of Law Tower (1960-65), a token tribute to the Tower-Not-To-Be. This crass, chockablock clustering of disparate parts hulks over the Charles as a concrete (so to speak) symbol of the law-office bureaucracy for which its students are bound.

Which lacks the lithe, lofty leap-and-bound and gracefully unified composition of the Boston Stump. (And the Law Tower is awkward functionally as well as visually: an elevator-linked stackup of classrooms, offices and mock courtrooms doth not a cohesive, collegial community make.) 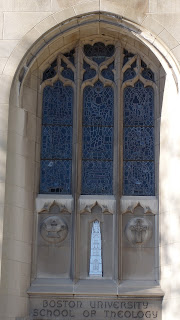 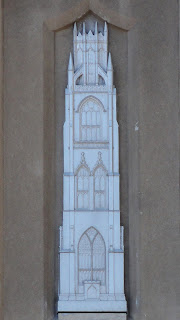 So the Alexander Graham Bell Memorial Tower reliefs still tower over the heads of Boston University students, professors and alums as they enter into its various schools of thought. These icons serve as grim but gracious reminders of the Boston Stump that stumped its stardom all over the States but forever eluded
its proper namesake, its rightful heir, its sister city.

Boston, Mass. is not completely stumpless, boasting a spire-challenged church of
its own: King's Chapel,
the granite Anglican-Unitarian landmark
built 1748-1752 from a Georgian design by Peter Harrison. Fundraising for King's Chapel's completion stumped the congregation, hence its foursquare bell tower bereft of a crown.