It’s history in a nutshell. 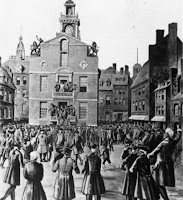 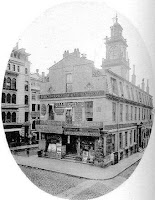 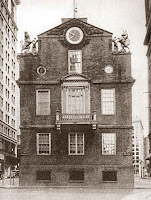 The number of uses, abuses and reuses this little brick building has endured over its 296 years is unprecedented in Boston history. 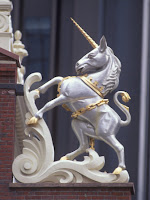 The Lion and the Unicorn that anchor the opposite ends of the building's Dutch gable tell you right off what it was built for: the government seat of Massachusetts Bay Colony, one of Britain’s 13 American colonies. The Royal Governor’s Council met right under the animals. In the next-door Assembly Hall, citizens could hear their elected officials debate current issues for the first time in the English-speaking world. In the west wing was the Massachusetts Supreme Judicial Court, where the state Constitution, the model for our nation’s Constitution, was drafted. On the first floor was a merchants’ business exchange, and future Declaration of Independence signatory John Hancock rented warehouse space in the basement.

Yes, this old house was ahead of its time, as Boston’s first mixed-use development and cradle of liberty.

The cradle rocked in 1761 when lawyer James Otis testified in the Council Chamber against the Writs of Assistance, which allowed British officers to issue search warrants against anyone at any time. This gave rise to our 4th Constitutional Amendment guarding against unreasonable searches and seizures. “Otis was a flame of fire,” said John Adams, “…then and there the child ‘Independence’ was born.” 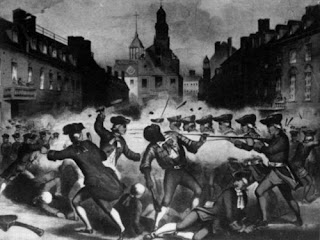 The cradle that nurtured that child was the east-side balcony, where King George III’s coronation and Royal Gov. Thomas Hutchinson’s appointment were proclaimed in 1760. From that balcony, Hutchinson urged the angry crowd below to disperse when British soldiers killed Crispus Attucks and four others in the Boston Massacre of 1770. The next day, Samuel Adams asked Hutchinson to move his troops to Castle William (where Fort Independence in South Boston is now) for safety reasons. Hutchinson did, as the Crown’s first concession to the colonies. 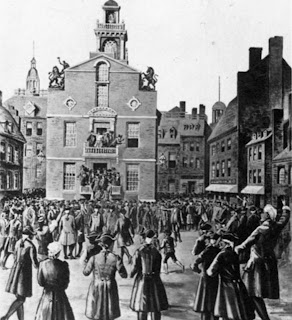 On July 18, 1776, the Declaration of Independence was first read aloud on the balcony. Then the Lion and Unicorn were yanked down and consumed in another flame of fire near Faneuil Hall, and King Street became State Street. Two hundred years later, Queen Elizabeth II spoke from the balcony to honor our Bicentennial.

In 1780, the balcony hosted Hancock’s inauguration as Massachusetts’ first state governor. And yes, George Washington stopped here, in 1789, before a crowd of cheers in honor of his victory over the British at Yorktown, Virginia.

When Massachusetts got a bigger State House in 1798, the old one filled up with wine sellers, wigmakers, hatters, a restaurant and a post office, while the Masons met upstairs. After Boston became a city in 1822, the Old State House became City Hall.

In 1835, abolitionist William Lloyd Garrison hid here from a pro-slavery mob. When City Hall moved in 1841, the Old State House really went commercial, sprouting a porch, signs and billboards. In 1881, the Bostonian Society formed to preserve this treasure as a Boston history museum. City architect George Clough restored it — Lion, Unicorn and all — in 1882.

Today the Old State House boasts two levels of exhibitions relating the roles the building and its city played in the American Revolution. Other exhibits include actual tea from the Boston Tea Party, Hancock's coat, recorded testimony from the Boston Massacre trial, paintings of Boston Harbor, and interactive history galleries for families with children.

But it still isn’t just the Old State House. You can rent the Council Chamber and Assembly Hall for dinners, weddings, receptions, and other uses fancier than warehouse space. For the basement isn’t a warehouse anymore — it’s now a subway entrance, aptly named “State.” Sorry, O Lion King!