You forgot your watch.

You lost your cellphone.

You neglected to charge your Smartphone overnight.

Your clocks stopped when the power went out last night.

You neglected to wind that old fob-suspended pocketwatch heirloom of Grandpa's, because it slipped your mind that his age wasn't digital or electric.

So what time is it?

Can't look at the clock?

Can't look at your watch?

Can't look at your phone?

The clock tower was a public sine qua non before personal timepieces came along — especially in ancient Greece, where time couldn't be told without the eight sundials and water-clock of the Tower of the Winds (second century BC, right).

Yet the challenge of keeping our own time in our fast-paced society makes us still dependent on our village clock tower, the Guardian of the Hours, the everpresent Father Time reminding us not to be late for school, work, a meeting, an appointment, a date, an event, and especially bedtime.

Colonial Boston was doing as the Romans do (given its European origins, what else could it do?) as early as 1770 when the 1729 Old South Meeting House's landmark steeple got its north- and south-facing clockfaces — just in time for furious Bostonians to know when to gather there in protest against the five deaths in the Boston Massacre of March 5. This well-timed mob forced Royal Governor Thomas Hutchinson to hasten the British soldiers out of town and over to Castle William, Britain's first concession to the Colonies.

Three years later, the Meeting House's new clock let Samuel Adams and the Sons of Liberty know what time to storm out of the house and down to the wharf to dump the tea into the sea in the Boston Tea Party, before the British could find out.

In 1872 and 1877, the clock let the city know time was running short for the salvation of Old South, which was saved from the Great Boston Fire of 1872 and, five years later, from demolition in the nick of time.

In 2009, the clock reached the end of an 11-month, $100,000 restoration — for which horologist David Hochstrasser took out, cleaned, reworked and put back its entire mechanism for the first time since 1770 — making it not only an historic icon but also a reliable reminder of the time of day for Downtown Crossing shoppers, Financial District businesspeople and Freedom Trail tourists in too mad a rush to glance at their watches or phones. 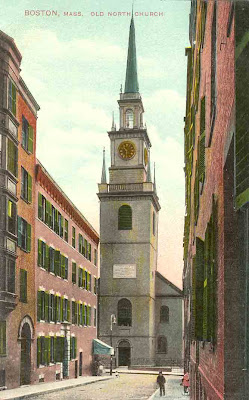 Since Old South's imposing steeple was erected to compete for skyline attention with Old North Church, built six years prior, Old North decided to become Old South's timekeeping equal after a gale blew down its original steeple in 1804.

The new tower, designed by Massachusetts State House architect Charles Bulfinch, was retrofit with a gilded Romanesque clock like Old South's (but with four faces this time), giving Old North a fuller role as neighborhood watchman.

First there were the bells, cast in Gloucester, England, in 1744 ("We are the first ring of bells cast for the British Empire in North America, A.R. 1744," reads an inscription on one of them), which Paul Revere had rung since his youth.

Then there was the belfry window, where sexton Robert Newman had hung the lanterns to alert Charlestown citizens from which direction the British soldiers were approaching ("One if by land and two if by sea," claimed Henry Wadsworth Longfellow, though Newman's two lanterns actually signified they were coming by the Charles River) as Revere departed Charlestown on his Midnight Ride to Lexington on April 18, 1775.

Now there was the clock, to make double-sure Bostonians got to church on time. But Hurricane Carol toppled the steeple and stopped the clock in 1954. Too frail to hoist back up, Bulfinch's clock tower was replaced with a replica of William Price's original tower, depriving North Enders of their faithful watchdog, yet affirming Old North Church's historical supremacy. 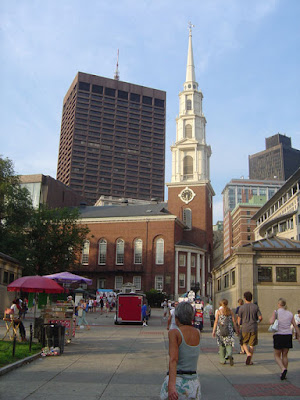 Eager to dominate Boston's heavenly skies more than its North and South adversaries, Park Street Church's Congregationalist sect had architect Peter Banner design its new shrine in 1806 with a telescopic tower of two levels of bells, plus the multifaceted clock its competitors were wearing, and site it in a much more prominent corner location by the Boston Common.

Now this open public park would give the church more visibility and sound projection — not merely to tell the time, but to ring it out.

Which makes Park Street Church even more of a public servant than Old North or South. Its bells still chime every quarter- hour on the quarter-hour, throwing in a few familiar church hymns every so often to entice you to its congregation.

And the way the tower's southwest-facing clock watches you from above as you emerge from the Park Street subway station further puts to rest that plea of desperation from the rock band Chicago: "Does anybody really know what time it is? Does anybody really care?"

When you see Park Street Church's beautiful Federal architecture and hear its radiant peal of bells, you know. And you care — especially when you're running late. But at least your tardiness becomes music to your ears.

(These chimes and clockfaces were how I, as a choirboy, knew and cared whether I was running late to rehearsal at nearby St. Paul's Cathedral [1819, right], where the still-uncarved tympanum in its Greek pediment remains clockless as well as artless.)

Built in 1713 to house the Council Chamber of the Royal Governor, the General Courts and the elected Massachusetts Assembly, Boston's Old State House became notorious as the site of the Boston Massacre and famous when New England's first public reading of the Declaration of Independence took place on its ornamental east-front balcony on July 18, 1775. Old State House assumed a greater public role when Simon Willard enriched its east-front gable with an opulent clock in 1831, when the building was rechristened City Hall. From the time of its initial 1881 restoration as a Boston history museum, Old State House's clockwork mill of reconstruction and restoration put it through numerous time changes... 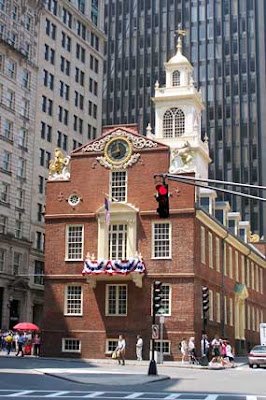 ...back to a clock, as if the Bostonian Society couldn't make up its mind about what era of the building's history its timepiece should symbolize, or whether anyone remembered their watch or cellphone. 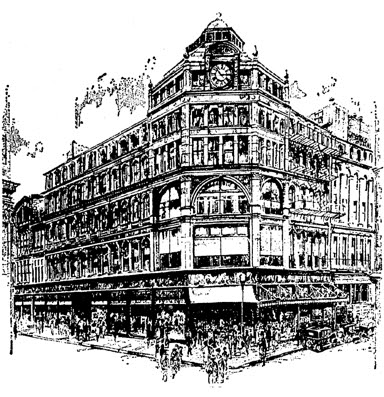 Jordan Marsh chimed in with Old South Meeting House and Park Street Church by capstoning Nathaniel J. Bradlee's rich brownstone edifice of classical columns, arches and keystones (each carved with a different human head) with a landmark entrance clock tower in 1861. It anchored the corner of Washington and Avon streets as shoppers approached it along Washington Street, inviting them head-on to come on in and shop, in exchange for the store's public service as timeteller.

Another survivor of the Great Fire of 1872, this one unfortunately did not escape the wrecking ball in 1975, despite the efforts of my father, Leslie Larson, to save it as founder of the City Conservation League, the grassroots precursor to the Boston Landmarks Commission.

A clockless (and characterless) brick box replaced it, marginally modified as Macy's but still lacking the meet-me-under-the-clock charm of its competitor, Filene's (right), whose clock still tells the time and whose bells still ring the chime despite its degradation to a Hollywood movie set fronting an empty backlot.


Turning back the clock...

...to a time when trains to and from Boston arrived and departed on time, as the clock-and-eagle combo atop South Station's crest conveyed when Shepley, Rutan & Coolidge's neoclassical masterwork opened on January 1, 1899. Of course, we Bostonians know how late every Amtrak, Commuter Rail and Red Line subway train arrives there today. But at least the still-working clock (the only hand-wound one left in Boston, so you're not alone, Grandpa) and still-erect bird still keep an eagle-eye on us as we hurry across Atlantic Avenue to make sure we don't miss our train, even if its late arrival gives us a breather. 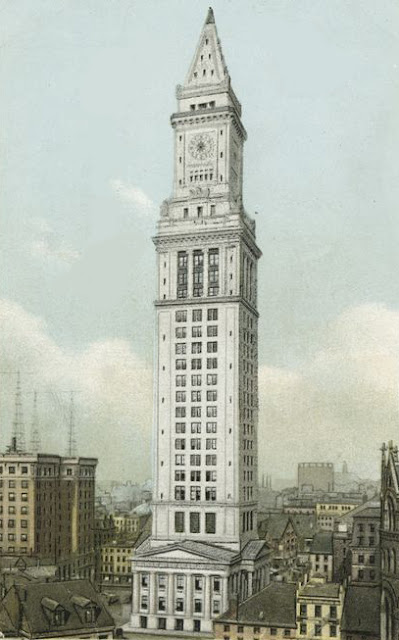 South Station's clock was modeled on Big Ben, but the Custom House Tower parallels its parliamentary predecessor much more in stature, if not accuracy. When Boston's shoreline was extended too far to make the Custom House visible by sea anymore, Peabody & Stearns crowned Ammi Burnham Young's 1847 domed Greek temple with a campanile in 1915 to alert incoming ships to where to pay their duty, and to enable customs officials to spot ships from afar to deter delinquency in duties.

Equipped with a clock on each side, it also reminded Bostonians from all directions what time it was. Being Boston's tallest building at the time (496 feet), it had a duty in its own right to fulfill the city's need to be clock-wise.

Yet the Custom House Tower became delinquent in its own duty, especially when it ceased its governmental function and became a Marriott time-share resort hotel in 1997. The clocks certainly don't share the same time-cycle now — each looks as though it belongs in another time zone in another part of the world.

So the tower has been stained with the sobriquet "the four-faced liar," putting prettiness over precision, especially when illuminée le soir, comme à Paris (right).

However, I recently checked my (generally accurate) watch with each of the clockfaces, and found that two of them matched it to a minute or two — making the tower two-faced, in the plainest sense of the word. 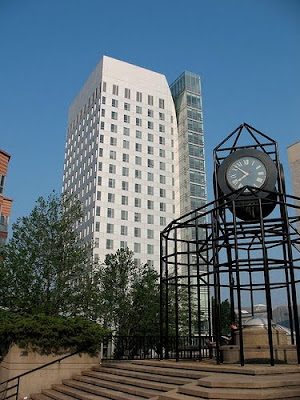 Two-faced, indeed, were the '80s and '90s, contrastingly characterized by the futurism of digital clocks and the retro of postmodern architecture.

But the twain never met, for digital clockfaces were too in-your-face, too mechanistically impersonal, to go public. And the two-handed, Roman-numeraled clockface was a better bedfellow to postmodernism's classical references.

So Grandfather's clock won out again. But at least this 1980s jungle-gym of a clock tower on the Northeastern University campus was "tubular" enough to satisfy local Valley Girls of its era.

Besides, its four-faced accuracy keeps students from all corners of the campus on schedule.


As do the classic clocks of Harvard University's Dunster House (thanks to the conscientious clockwork of Electric Time Company of Medfield, Mass., which has been manufacturing and maintaining public clocks since 1918) and its model, Tom Tower of Christ Church — which boasts Oxford University's loudest bell, on which its students, profs and prefects depend to get them to the Church on time.