Little boxes on the hillside... 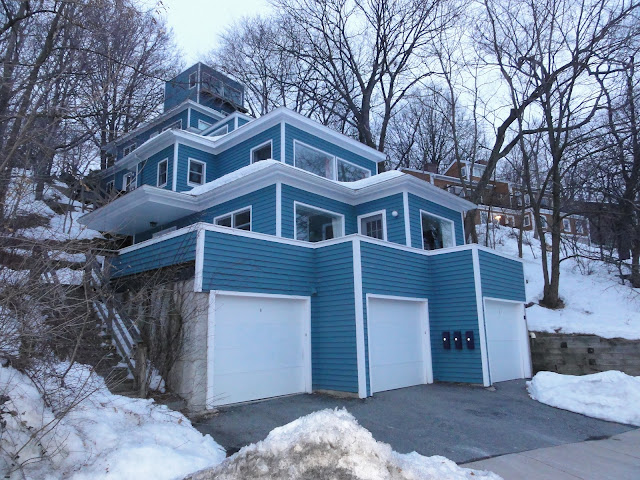 ...but Pete Seeger would be wrong to say these ones are "all made out of ticky-tacky and they all look just the same." No, this time the topography defines the boxology, in proper Roxbury fashion.

This contemporary condominium on Fisher Avenue in Boston's Roxbury neighborhood is the closest thing to a "Roxbury style" I've ever seen, taking full advantage of the area's characteristically hilly terrain to evolve as a series of stepped dwelling units leading up to a "lookout" tower room at its pinnacle. Thus each level's setback along the upward bound hill yields each unit (or story, in the uppermost unit's case) a terrace from the roof of the lower unit or the ground-level garages, which comprise the first floor so that they don't intrude upon any unit's living space with exhaust odors or car motor noise. This multilevel arrangement allows each unit a great hillside view, and each level is jogged out in a zigzag form to allow it multiple sides of exposure, hence more light inside. 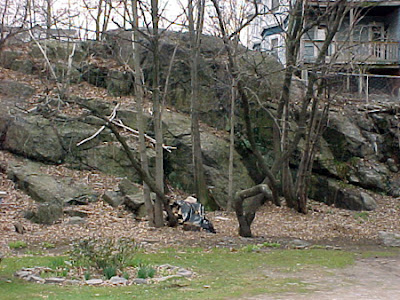 This creative configuration gives the entire complex a jagged, asymmetrical form that emerges as a geometric abstraction of the randomly craggy Roxbury puddingstone that characterizes this neck of the woods. This conglomerate stone, seen here in Roxbury's preserved Rockledge Urban Wild, is an aggregate of many different kinds of rocks, stones and pebbles bonded together by prehistoric volcanic and glacial action, forming the bedrock underlying the bulk of Roxbury, as well as parts of Brighton, Brookline, Canton, Dedham, Dorchester, Dover, Jamaica Plain, Milton, Needham, Newton and Quincy. 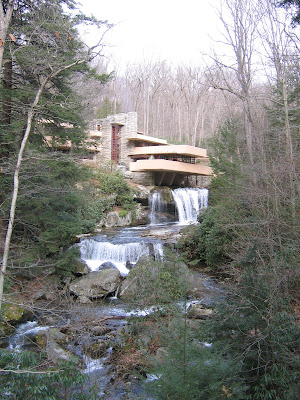 Of course, the greatest hill-house of all is Frank Lloyd Wright's Fallingwater in Mill Run, Pennsylvania. Far from the run-of-the-mill of little boxes on the hillside, this nature-inspired masterpiece of organic architecture comprises big slabs on the cliffside, cantilevering over the waterfall below them in a visually precarious posture — albeit in a geometrically ordered programme that reflects the machine age as well as nature's way. Man and nature are both at odds and in détente here, and the structural assuredness of the balcony slabs is counterbalanced by the unpredictability of their built-to-last claim, appearing ready to cascade down the rocky waterfall on a moment's notice as the water gradually erodes the rock into the soil from which all came. 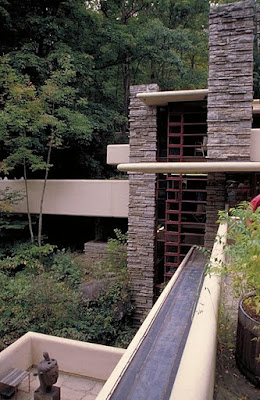 The stair towers are built of local stacked stone as a monument to the nature that made all things and a contrast to the man-madeness of the concrete that cast the slabs. The verticality of the towers also emphasize the upward climb of the hill the house is perched on, while the thin horizontality of the stones contrast this with a reminder of the earth the house rests on, as the prime giver of its building materials.

No house should ever be on a hill or on anything. It should be of the hill. Belonging to it. Hill and house should live together each the happier for the other.

One wonders what Wright thought of Beacon Hill during his brief stays in Massachusetts, as a child in Weymouth and while designing his Amherst Usonian House. Though scornful of historical styles, he hopefully appreciated the way the Mount Vernon Proprietors let the hill shape a cohesive neighborhood with a rhythmic progression of brick rowhouses.

Beacon Hill's homes forge a visual unity that evokes the close-knit community the developers had intended, while visually referencing the hill's contours as the homes ascend and descend the slanting streets in a consistent curve, which their general uniformity of height gives rise to. Thus they are more of than on the hill, belonging to it, since the hill was the nurturing mother of their collective design, and they are not freestanding on the hill but supporting and shoring up one another's structure with abutment, like a hill's firmly packed soil and strength-bracing rock. This is especially true of Acorn Street, the way the cobblestones allude to the natural rock and soil of the hill the community grew on.

And the diversity of door elements, cornice heights, fenestration, and decoration—particularly windowbox flowers and yuletide wreaths—makes Beacon Hill homes not "all look just the same," expressing the individuality of the occupants in a composition that epitomizes Samuel Taylor Coleridge's definition of beauty: "unity in variety."

This is how Beacon Hill became a prototype of hillside development. Which would not have been possible had Beacon Hill not been cut down from 1807-1828, for landfill to fill in the Mill Pond and to level the hill to a comfortable live-on height. This made the neighborhood even more "of the hill," as steep inclines wouldn't have made the hill or its residents "each the happier for the other."