Easter's occurrence on April Fool's Day happened only twice in the lifetime of Trinity Church's sexagenarian Interim Rector William W. Rich, as he mentioned in his sermon that Sunday.

And this uncommon convergence of the sacred and the profane wasn't entirely jarring. Mary Magdalene, James' mother Mary, and Salome were arguably April-fooled by Jesus' absence from the tomb when they arrived to anoint his body with spices (Mark 16:1-8).

But regardless of whether "Happy Easter!" or "April Fool!" dominated my celebratory impulses that day, I thought the best way to observe this rare hybrid holiday was to suspend my agnostic disbelief and attend an Easter service at one of Boston's greatest architectural manifestations of the Resurrection: Henry Hobson Richardson's Trinity Church in Copley Square.

As I stood in line for the noon service, the 1877 granite-and-sandstone landmark seemed to take a new form, as a transformation of the stone rolled away from Jesus' tomb into something richly symbolic, robustly everlasting, romantically upward-tending. Its pyramidal form emphasized the mass of its stone, while its grand central tower, flanking turrets and pedimented arches evoked a transcendence of the heft of the material from heavy to Heaven, "rising out of Copley Square like a mountain of stone," as a 19th-century Boston writer observed. 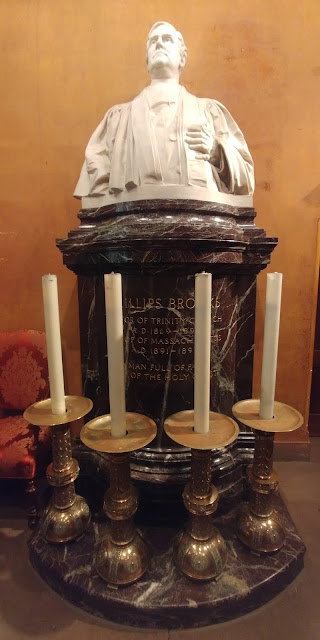 This phrase from that service's First Lesson describes Trinity to a T—not merely alluding to the fat figure of original pastor Phillips Brooks that necessitated wider doorways in the church, but denoting the decorative equivalent of the "feast...of rich food filled with marrow, of well-aged wines strained clear" (the actual words from that Sunday's lesson) that was in store for the parishioners upon entering the mountainous megachurch. The offerings of opulence include opalescent stained-glass windows and egg-tempera paintings by John LaFarge, painted-glass windows by Edward Burne-Jones and William Morris, a painted suter window by Charles Mills, sculpture by Daniel Chester French and Augustus Saint-Gaudens, glass mosaics on the altar, and intricate stenciling throughout. These, coupled with the use of Red Longmeadow sandstone to create bands of color and carvings of the Apostles, Saints and vegetal capitals on the exterior, manifested Brooks' goals for Trinity: "to create as perfect a place of worship as possible, and to create a place of worship as beautiful as possible"—in short, to express the Heaven of Jesus' ascension.

The newcomer to Trinity might well be April-fooled by the interior's unconventional layout and circus of color, with the dramatic wingspread of its transepts, the soar of its quadruple-arched central tower, and the boisterous bulge of its apse, and its prosperity of rich décor. But the balanced equilibrium among all of these elements—courtesy of the compact Greek-cross configuration—democratizes the sanctuary with proper Athenian aptitude to make everyone feel more welcome than overwhelmed. The spatial effect is more like a squared-off meeting-house ambiance than the nave-apse hierarchy of the typical church's Latin-cross form. This immaculate blend of art and architecture extols Jesus' earthly all-inclusiveness and heavenly omnipotence simultaneously. 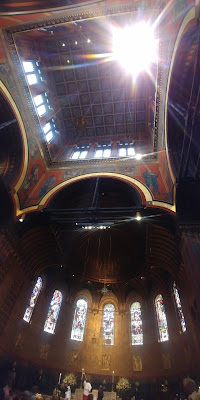 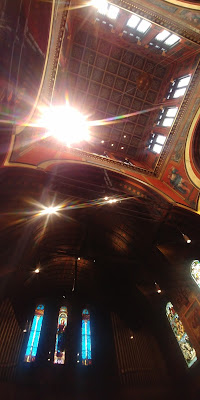 The tower's central squareness affirms the balanced equality of all parts, and its soar emphasizes the Resurrection's supreme centrality to Christianity. The clerestory windows extol the heavenly light of Jesus' ascent, bookended by images of him from Clayton & Bell's English Medieval apse windows depicting stages in his life and John LaFarge's Christ Preaching over the organ loft. 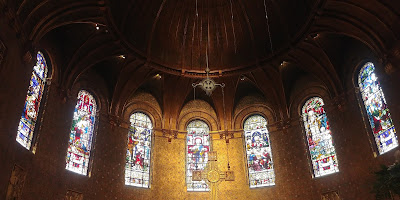 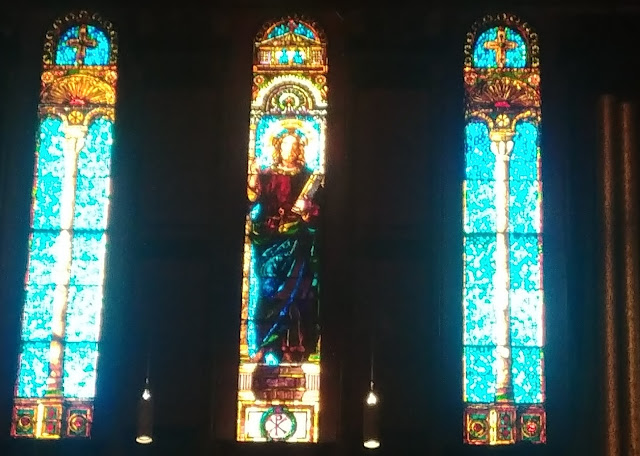 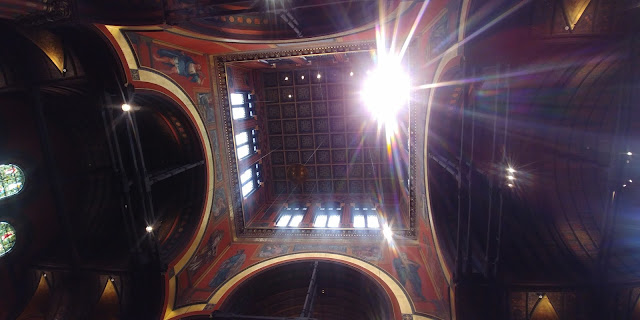 Roman arches are not only central to Richardson's trademark Richardsonian Romanesque style. They are the load-bearing structure of the central tower, bolstered by iron ties to prevent buckling and to distribute the weight evenly. The ties are decoratively covered in carved wood to blend them with the artful elegance of the church, which also includes...