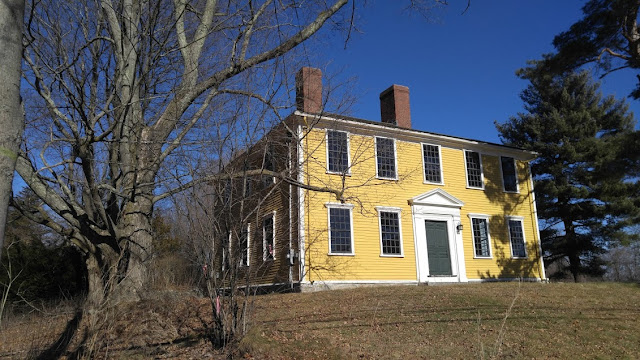 The William Wellington House at 735 Trapelo Road, Waltham, Massachusetts, truly epitomizes the spirit of independence its illustrious owner had fought for in the Revolutionary War, before retreating to the hillside peace and prosperity with which his father, Thomas Wellington Jr., sought to reward his family by siting the abode just so. 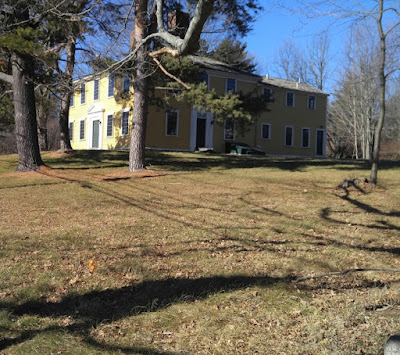 Built c.1779, this freestanding Colonial (Massachusetts was still a colony, remember) stands solo on its sweeping, rolling one-acre farm site, prematurely expressing the freedom that was to appear on the horizon four years later, looking boldly confident of the imminence of our Founding Fathers' fruit. Its unusually simple appearance for its Georgian era bespeaks the ornamental restraints of the eras prior and after: the Puritans' original settlement in 1630, seeking freedom from religious persecution in England; and the Federal Period following General Washington's victory over Lord Cornwallis at Yorktown in 1781, by which the new American architecture drew on ancient classical styles to express the Grecian democratic and Roman republican values that inspired our Constitution. So 'pre-Federalism' best describes the Wellington House, architecturally. 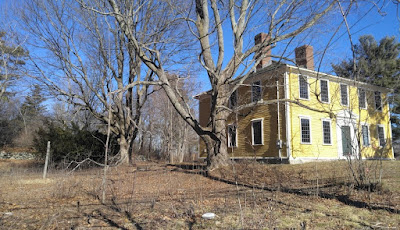 The size of the house and its grounds also evokes the high socioeconomic status its owner aimed to gain post-independence. An eminent Waltham citizen, Mr. William Wellington was a 17-term town selectman, and his Elm Farm was one of the town's five most valuable estates, valued at $1,200.

On it he raised livestock and grew fruit orchards, produce gardens and a wheat field, in step with the postwar plantations of two Founding Fathers: George Washington's Mt. Vernon and Thomas Jefferson's Monticello. Wellington, a member of one of Waltham's first families dating back to Roger's settlement there in 1636 (before Waltham declared independence from Watertown), owned many other properties in Waltham and Lexington.


These included a tavern, later the Central House, that stood on Main Street where the Francis Buttrick Library (1915, Loring & Leland), Waltham's public library, now stands as a bequest from the city's largest landowner, Francis Buttrick. Its Georgian Revival design trumpets our founders' Greco-Roman ideals, albeit in a more kingly way than the Wellington House.

Thank you for visiting. I welcome your comments!