Frank Lloyd Wright's 150th birthday evokes fond memories of the Wrightian designs of my late father, Leslie Larson. A devotee of Wright since corresponding with his studio as a boy growing up in Superior, Wisconsin, he blended the master's essentials—organic design, natural materials, earth-hugging horizontality, fluid space—with Japanese simplicity and Scandinavian earthiness to create homey havens of back-to-nature, back-to-basics living.

Wright's 1936 Herbert Jacobs House in Madison, Wisconsin (above), likely inspired this one-story dwelling my father designed in 1960 as a weekend/summer home for a renowned psychiatrist in Niantic, East Lyme, Connecticut. The clients were my godparents, the late Eric T. Carlson, M.D., founder of the DeWitt Wallace Institute for the History of Psychiatry at Weill Cornell Medical College in New York City, and his wife, Jean.

Formally christened Jocqueen—which means 'house' in the extinct Mohegan-Pequot dialect of Algonquian Native Americans who once lived in this area—the Carlson House does full justice to its nature-base, Indian-style and Wrightian-style.

Like the Jacobs House (above), the horizontal layout of the Carlson House (below) hugs its terrain, its all-wood construction honors the trees that built it, its solid front walls allow privacy from the street, and the cantilevered eaves protect them from excessive weathering.

Also, the L-shape plan allows each house a side location on its plot, hence generous yard/lawn space. And each garage is handily on the left for immediate entry from the street (which the Carlson House ended as a cul-de-sac at the time) and smoothness of transition from car to home.

There are differences, however. The Carlson House is further set back behind an all-gravel frontage with sparsely planted shrubbery and a running stone-ledge. Inspired by Japanese sand, gravel and rock gardens, this landscape also takes cues from the sand, rocks and reeds of Black Point Beach down the road (an enticement for the Carlsons' daughter Karen to head for the dunes, perhaps).

Furthermore, the wall planks are vertical, unifying them with the upward trees from which they came, as a tribute to their natural origins. And the house's tripartite arrangement articulates the separate functions of each of the parts—the garage/workshop on the left, the bed/bath/kitchen section in the center, the semi-autonomous living-dining room at right—a principle of modern architecture Wright practiced often. But their unified composition guides our eyes smoothly across all three parts, denoting the fluid interconnection and ease of transition among them inside. 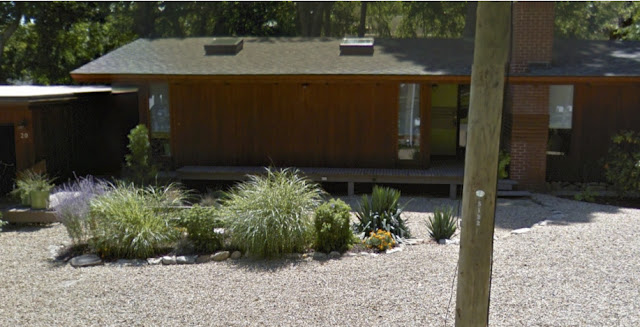 Preparing us for this is the boardwalk leading us from the garage along the front of the center section (paralleling the hallway inside) and then angling leftward to the set-back entrance. The eave protects us from the elements all along the way, easing the transition from outside to inside, in terms of shelter from the storm as well as continuity of nature. 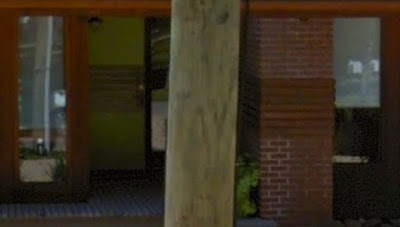 Further smoothing our path from out to in is another Wright touch: parallel patterning to unify different parts of a house. Horizontal bars on the door and chimney are level with each other, and vertical windows abut door and chimney symmetrically. This begins the balance and order we come home to.

And we do. Right of the entry is the spacious living-dining room, where the gabled roof dramatizes the space with a cathedral soar. It also elevates the living-room window- wall, bringing nature more fully into the house. Built-in shelves display books and objets d'art with lithe grace, exposing the cork- paneled walls to further unify us with nature. 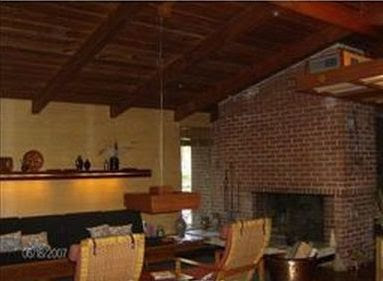 Contrasting the void of the window-wall is the solid of the living-room wall, allowing privacy while honoring nature with grasscloth. The knotty-pine ceiling complements the woods outside the window-wall. The exposed-brick fireplace honors the earth that was its origin. The vertical window dissolves the dark corner in a Wrightian vein. 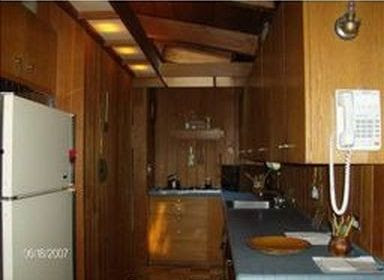 The kitchen's galley narrowness epitomizes Wright's view of its proper use: to do what's needed and get out of there, not to linger the way 'eat-in' kitchens tempt us to do. This one is placed to fulfill that function fully. It begins at the dining room, conveniently runs its appliances and cabinetry along an L-counter, and ends at the hallway to the bath and bedrooms.

This strategic arrangement makes it easy for us to eat, clean up, and go get ready to go to work in the morning or to go to bed at night. Thoughtful lighting is provided for each of these occasions: a skylight for breakfast, and a row of screen-filtered warm incandescent lighting for dinner.

Paralleling the galley kitchen—literally and figuratively—is the hallway, which is similar to the one in the Jacobs House, pictured here. Both are purely functional spaces designed to get us from Point A to Point B, kept relatively dark so as not to tempt us to loiter in the halls.

The Carlson House hallway is also well placed to run straight from the space between the living and dining areas past the kitchen to the cork-paneled bath—where a skylit tub/shower gives us a sunbath, too—and on to the master bedroom at left and Karen's room at right.

The master bedroom is minimally lit by corner-windows flanking the king-size bed area, allowing for maximum sleep. Karen's room is small but well-economized spatially: sliding- door closets along one wall, a makeup vanity below the window, built-in bunkbeds in the dark corner for optimum sleep-tight efficiency.

The French doors in the living-room window-wall and in-between the dining room and kitchen open out to a wraparound deck that runs along and steps down to a spacious back yard, where I fondly remember pine-tree aromas augmenting the naturalism of the woodwork. Rugged boulders add a Japanese mystique to the yard, where light and shadow are as well-balanced as inside. This makes Jocqueen even more exemplary of the "natural house" my father created from Frank Lloyd Wright's vision for better living.

Here's another "natural house" he designed for his parents in Northfield, Minnesota, in the late 1950s, several years after he graduated from St. Olaf College. Named Wheatledge, it follows Wright's use of rugged flat stones that are laid to emulate naturally stratified stone for solid, self-sustaining walls, in homage to my grandfather's masonry profession. The stone extends inside as exposed walls and a fireplace to unify the occupants most fully with nature, aided by the woodsmoke from a roaring fire and, of course, the house's forested setback from the street.

Like Jocqueen, Wheatledge is exemplary of two Wrightian principles: (1) inward-oriented design for optimum privacy and a feeling of retreat into nature from urban hustle-and-bustle, and (2) one-story configuration, which honors the earth with its horizontality and made it convenient for my grandparents and godparents to get around inside as they got older. Low stone knee-walls planted with perennials, groundcover and many kinds of trees complete the effect of peaceful nature sheltering Wheatledge.

Rest in peace, Dad, reassured you made the Wright choices for my godparents and grandparents. Happy Father's Day.