My kind of place 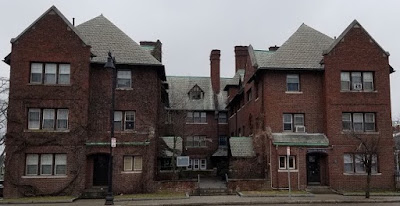 Believe me, this is my favorite apartment building in Boston. Its design, composition, balance, proportions, scale, symmetry, and mélange of materials are all so perfect that, if I had my druthers, I'd live here. 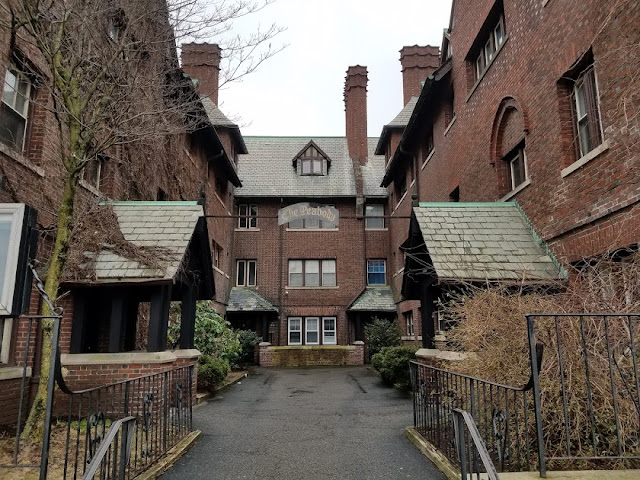 This is none other than The Peabody in Peabody Square in Dorchester's up-and-coming Ashmont neighborhood. Built in 1896-97 from a design by Ashmont architect Edwin J. Lewis, this 3.5-story U-shaped grouping of apartments exemplifies the English Tudor style at its most intimate and least fussy. The uniform solidity of its brick walls, the modest scale of its fenestration, the geometric precision of its high-hipped slate roofs and dormer gables (owing, no doubt, to Lewis's MIT education), and the cocoony feel of its forecourt entrance all convey comfort, coziness and congeniality inside.

In his book Ashmont: An Historical Guide to Peabody Square, Carruth's Hill, and Ashmont Hill and the Architecture of Edwin J. Lewis, Jr. and John A. 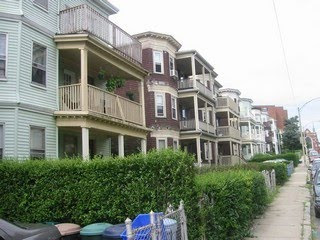 Fox, architectural historian Douglass Shand-Tucci describes The Peabody as comprising "four connected brick three-deckers with servants' quarters under the roof. Two of the four entrance porches to each three-decker are visible in the courtyard." The three-decker, Dorchester's perennial staple of affordable, home-as-investment housing made to order for the influx of immigrants that spawned the annexation and expansion of Boston's "streetcar suburbs," is given a treatment of castle-like comfort, fireproof fortitude and homey homogeneity at The Peabody. (A three-and-a-half-decker, even a double-decker, no less.)

"The ground-story apartments of the two three-deckers whose narrow ends face Ashmont Street," Shand-Tucci continues, "were designed for doctors and incorporate waiting rooms and offices, features common to both in-town and streetcar-suburb apartment houses." Doctors were what immediately came to mind when I first set eyes on The Peabody. Its solid, sheltering sensibility would ease my anxiety about going to the doctor, and its homelike humility would truly make me feel at home in a doctor's office. 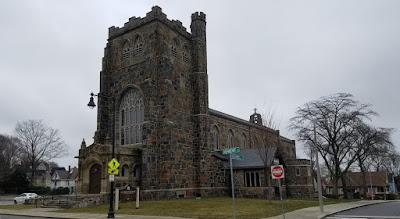 The Peabody is neighborly in other ways, too — and its namesake, Col. Oliver Peabody (1834-1896), a founder of the Kidder, Peabody & Co. securities firm, set out to make it so. As benefactors of next-door neighbor All Saints' Episcopal Church (1892-94), the chef d'oeuvre of English Gothic master architect Ralph Adams Cram, the Colonel and his wife, Mary Lothrop Peabody, constructed the apartment building to shelter the church from clamorous Dorchester Avenue in a way that complemented the church architecturally. 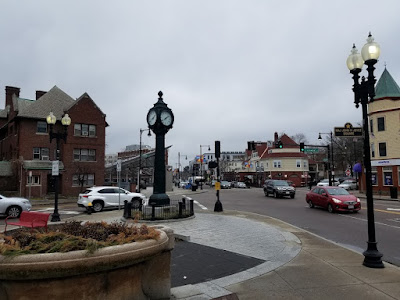 The Peabodys also donated the square's central plot for park use (originally a circle, it became a triangle when the streetcars rattled in). To honor this, the Boston City Council named it Peabody Square in 1893. In memory of his brother, Francis H. Peabody erected the park's granite drinking trough (for horses and people) in 1899. 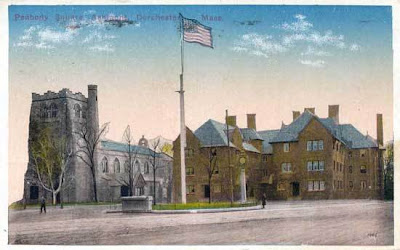 The Peabody is simultaneously jolly good fellows and amiable archrivals with its English medieval revival contemporary. The edifices play off one another as a classic cluster of contrasts cut from the same cloth: Gothic vs. Tudor, stone vs. brick, random ashlar vs. regular rows, battlements vs. gables, bell tower vs. chimneys, front tower entry vs. setback court entry, erect vs. squat, longitudinal vs. latitudinal, L-shaped vs. U-shaped, picturesque vs. symmetrical... yet sharing a common English bond. 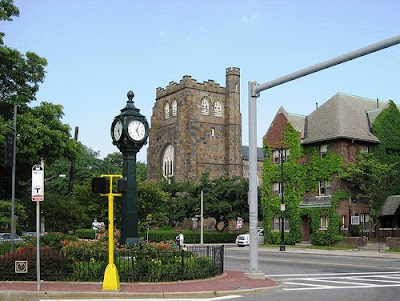 Yes, the clock in the old pic still has its tick, having ticked the time away with mostly clockwork regularity since its erection there in 1910 by the E. Howard Clock Company of Roxbury. “Acting on instructions of His Honor Mayor Hibbard, I am contemplating installing a twelve foot, four dial, post clock in the public square, known as Peabody Square, junction of Dorchester and Talbot Avenues, Ashmont," wrote G.W. Morrison, Superintendent of Public Buildings, to the Boston Art Commission dated May 14, 1909. "Each dial is to be thirty inches in diameter… The enclosed blueprint shows the design of clock to be used and I respectfully request the approval of the Art Commission," who unanimously approved the classically columned clock. 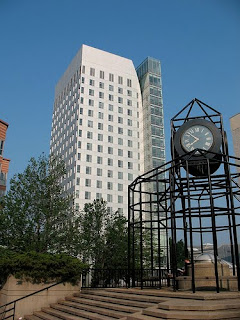 Boston's only architect-designed clock (until Northeastern University came up with its tubular timekeeper tower in the 1980s), the Peabody Square Clock came from the drafting table of William Downer Austin, a Boston Society of Architects member. The E. Howard Clock Company considered adapting Austin's design as a prototype for citywide clocks, but this never came to pass until pseudo-Victorian variations sprang up in Cleveland Circle, Washington Square and other crossroads a century later.

Yes, time has proven that classic clocks perform a better civic duty to crossroads commuters than contemporary contraptions (though, admitt 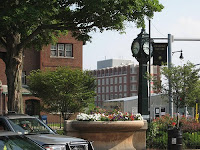 edly, an E. Howard antiquity would stick out like a square at a hippie gathering on Northeastern's ultramodern campus). And this timekeeper would certainly be a graceful greeting for me each morning were The Peabody my pad.

And so would The Peabody's other historic neighbors, clockwise from its left:

O’Brien’s Market (1884) is a mixed-use building designed by W. Whitney Lewis in quintessential Queen Anne style. A brick first floor of arched openings, wood-shingled upper floors, an off-center oriel window, and an octagonal main wall all culminate in a pyramid-topped turret. Enriching this effect are a off-center gable with a trio of lookout windows, terra cotta carvings in the ridges of the intersecting gables, and a sand-and-pebble mosaic of sinuous decorations and the building's year of construction, spelled out in small blackened stones. 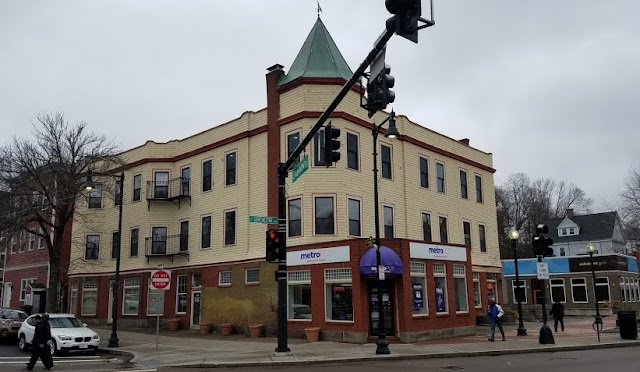 Ashmont Fire House (1895), designed by city architect Edmund March Wheelwright, who concurrently did the Park Street and Boylston T stations. He's also infamous for the Harvard Lampoon building, a neo-Jacobean-Medieval-Tudor-Anglo-Saxon-whatevayawannacallit which gags forth Hahvahd's hahas, heehees and hohos, and where Conan O'Brien got his early cracks at comedy before his big boob-tube breakthrough. But I digress (couldn't help it — I was a class ahead of Conan at Brookline High). Wheelwright curbs his sense of humor here at the station, infusing his Italian Renaissance Revival firehouse with the serious, straightforward intent of the dedicated firefighter: an austere, restrained symmetrical composition of burnt Sienna brick, an Italian lookout loggia of Corinthian columns denoting the firefighters' vigilant eyes on the neighborhood, and a slate hipped roof overhanging like a fire helmet's brim.

Make room for modern, Mr. Peabody — the new Ashmont MBTA station, when completed, will soar like a seagull with its single-slope shelter of steel trusses. One of three new Dorchester Red Line stations designed or redesigned by Cambridge Seven Associates (Fields Corner and Shawmut are the others), this one replaces a bunker-box of cavernous concrete and integrates Ashmont's pedestrian, bus and subway transit modes with a gesture of geometric gentility. So as not to disrupt the square's Victorian vehemence, the station is set back behind a sweeping plaza right by The Peabody. 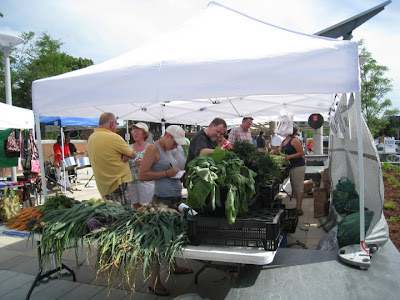 The plaza already expands Peabody Square's civic contribution to the neighborhood by hosting one of several farmer's markets dotted throughout Dot (Dorchester's nickname). Every Friday from 3-7 p.m., fresh vegetables and fruits flourish here in the convenience of next-door one-stop shopping on a budget for Peabody dwellers already paying through the nose to live at their luxurious location. 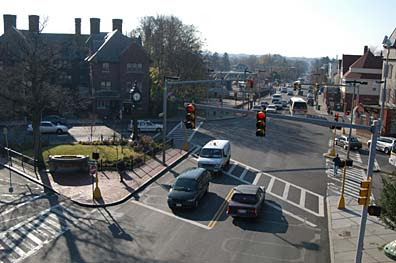 The Peabody's sense of time and place makes it my kind of place!