Hancock on the block...and off again

But far from a chip off the old block, being one of the few glass skyscrapers to defy the norm of its contemporary peers as well as its historical forefathers, both financially and architecturally.

Yes, Boston's beloved (at first bedeviled) John Hancock Tower has transferred hands once again. Following a 2009 foreclosure that forced Broadway Partners to auction it off for $660 million ($640 million going to their defaulted loan) to Normandy Real Estate Partners and Five Mile Capital Partners, these guys put the Back Bay behemoth back on the market and got bids from Boston Properties, owners of the Hancock's architectural/actuarial rival, the Prudential Tower (below, left) down the block; Beacon Capital Partners, who had unloaded the Hancock in Broadway's lap in late '06 for a whopping $1.3 billion; and Vornado Realty Trust, owner-uppers to the $700 million Filene’s rehab debacle (below, right), Casey Ross of The Boston Globe reported on August 26, 2009.

Guess who won out? None other than the Pru's owners, for a record-breaking $930 million, which includes $289.5 million in cash,  $640.5 million in assumed debt, and about $2 million in acquisition costs, Craig M. Douglas of the Boston Business Journal reported on October 4, 2010.

Hard to believe those rivals are now siblings!

But, as the Filene's fiasco goes to show, the recession has cooled new construction in Boston, so its existing buildings from recessions and recoveries past are the hot property now. The cool blue glass giant's front-and-centeredness in this market isn't surprising, given its Miesian masterwork, its photogenic familiarity, and its stalwart status as New England's tallest building (thanks to the recession), yet is, given its shaky foundations.

An eye-popping sight the tower hardly was at first. Upon its topping off in August 1972 (beating its rival Pru — then Boston's biggest, boxiest and boringest — by 41 feet and 8 stories), its 500-pound, 4-by-11-foot glass panes began popping out, causing a maelstrom of glass showers and Boston Police street closures (but, deo gratias, no injuries). The plywood infill of the window voids earned the building the sobriquets "Plywood Palace" and "Plywood Ranch" (the moniker of a suburban lumber-yard chain at the time) and the visual distinction of a grain elevator. Lab research concluded that oscillating expansions and contractions of the air between each window's inner and outer panels caused the pop-outs of the windows, hence their total replacement with half-inch-thick heat-treated single panes by manufacturer Libbey-Owens-Ford, who bore the redo's entire $7 million price tag.

To top it all off, the tower began to sway in the high winds it caused, and Swiss Engineer Bruno Thurlimann determined these winds could topple it eventually. Thus it was reinformed with 1,500 tons of diagonal steel bracing like that of its 1970 predecessor, Chicago's John Hancock Center (left), and Le Messurier Consultants retrofit its 58th floor with a $3 million "tuned mass damper" like the one they installed in New York's 1978 Citicorp (now Citigroup) Tower (right). The tuned mass damper was best described by architecture critic Robert Campbell in The Boston Globe ("Builders faced bigger crisis than falling windows," March 3, 1995):

Two 300-ton weights sit at opposite ends of the 58th floor of the Hancock. Each weight is a box of steel, filled with lead, 17 feet (5.2 m) square by 3 feet (0.9 m) high. Each weight rests on a steel plate. The plate is covered with lubricant so the weight is free to slide. But the weight is attached to the steel frame of the building by means of springs and shock absorbers. When the Hancock sways, the weight tends to remain still... allowing the floor to slide underneath it. Then, as the springs and shocks take hold, they begin to tug the building back. The effect is like that of a gyroscope, stabilizing the tower. The reason there are two weights, instead of one, is so they can tug in opposite directions when the building twists. The cost of the damper was $3 million. The dampers are free to move a few feet relative to the floor.

Naturally, all those repairs, reparations, replacements and retrofits soared the Hancock's construction costs from $75 million to $175 million.

But by the time the dust, glass and oil had settled upon its five-years-in-arrears dedication on September 29, 1976, its liquid-blue glass facade, its geometric angularity, and its sheer skyscraper stature over a historically low-scale, tradition-bound city was already attracting the iconic awe it continues to capture today. The following year, the American Institute of Architects gave it a National Honor Award.

In 1983, it received the Boston Society of Architects' annual Harleston Parker Medal (the third Hancock building to do so) — a far cry from the BSA crying foul in 1967 over its alleged "relationship, or lack of it, to Trinity Church and Copley Square, [so] one has to assume that it will be the bellwether of all contemporary urban design problems" (which it was, for a few years and many million$). A mid-1990s Boston Globe poll of architects rated it Boston's third best work of architecture. Even New Yorker architecture critic Paul Goldberger, according to a Sept. 23, 2010 Globe editorial, called the Hancock Tower "one of the most beautiful skyscrapers ever built."


Mirror, mirror on the wall 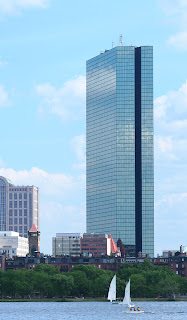 The fairest weather of all is magically mirrored on the Hancock's 10,344-pane glass curtain wall by a pure-blue hue. When the clouds roll by, their reflection rolls with them. When skies are gray, so is the Hancock. At night, its interior light pierces through its panes in a majestic moonlighting of midnight oil.

But most of all, architect Henry Cobb of I.M. Pei & Partners (now Pei Cobb Fried & Partners) designed the tower to reflect its neighbors as opposed to crowding or overbearing them — that is, to defer to Copley Square history as well as to make it.

And here's where "complexity and contradiction in architecture," in Robert Venturi's phraseology, comes into play in the Hancock. Its glass skin, its 60-story height and its amalgam of trapezoidal, parallelogram and triangular shapes are decidedly a radical departure from Boston's boxy, low-scale, historically derivative masonry building tradition. But at the same time it appears to "disappear" from our consciousness as its one-way mirror-glass walls mirror-image their historical environs, depending on where we're standing or walking or which way the sun is shining. In this way it showcases a panoply of architectural styles while being ever-so-humble about its own.

In the crystal we see...

In further observation of John Hancock Life's "good neighbor" policy, the tower also defers to its surroundings by setting itself back enough from them on all sides to bring them into clear view as we round the corners of the tower. In this way the tower serves as a visual orientation point for tourists and sightseers by directing their attention toward landmarks that signify where they are in the city: Copley Square.

Around the corner we see...

To accomplish both of these accommodations to its elders, the tower's main frame had to be skewed into a parallelogram, which put it perpendicular with Copley's original bisecting vector, Huntington Avenue: 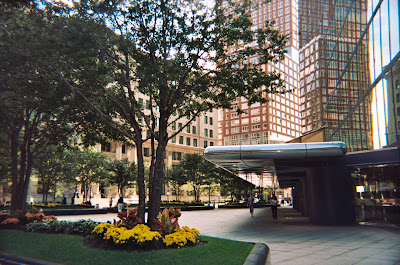 And this twist of fate does the Hancock's occupants a neighborly favor: it yields a spacious entrance plaza with a protective canopy and a prominent view of the tower's ancestors. However, wind tunnels come with the territory, but picturesque plantings mitigate this misstep.
In all of these ways, the John Hancock Tower confirms an architect's observation of it from 1975: "It really is an excellent [neighbor], because it looks like it isn't there" — at least, from this angle:

Where's Johnny?
For a clue, observe the shadow slashing diagonally across the Back Bay landscape, meeting head-on with the Massachusetts Avenue bridge to MIT so as to form a near-right angle with the bridge (all 364.4 Smoots + 1 Ear of it) from this perspective. Then take a ruler and connect the bridge's MIT end with the shadow's foot, and the ruler's edge will scribe Johnny's vertical notch, yielding a near-right triangle. Another mathemagical marvel from Mr. Hancock!

In reality, virtual or otherwise, Johnny's not going anywhere. Worth almost $1 billion to his buyers, he's still Johnny-on-the-spot, whether he's in the spotlight or not. And that's something to get Hancocky about.