Not in the WTC or Petronas sense of the word. Just equally overscaled, overrated, intrusive, expensive, and just plain dull and forgettable—though, like the antecedent Prudential Tower, so omnipresent from everywhere you can't get them out of your head, and, unlike the precedent John Hancock Tower, lacking in contextual distinction and memorable form.

Which makes it surprising that the Millennium Tower (left) in Boston's Downtown Crossing and One Dalton (right) in Boston's Back Bay got so many accolades when they opened in 2016 and 2019, respectively. For they share more common attributes with the unanimously reviled Pru than the universally praised Hancock (though one of them was designed, regrettably, by Hancock's architect).

Designed by Handel Architects, most famous for the 9/11 Memorial in New York, the Millennium Tower makes no sort of impression from a distance. When its glass facade (ho-hum, that's all that's built nowadays) regains its reflective powers, it resembles either a svelte version of a Bic cigarette lighter or a cluster of those shiny-new Sheaffer pens I got as a Christmas present ages ago but hardly took out of the jewel box, thus preserving their silvery-chrome luster to this day. 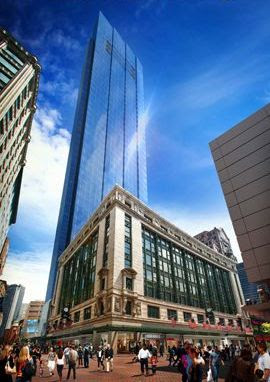 Such an appearance is an intrusion on the historic Boston skyline, to be sure, creating odd bedfellows with the historically elegant Park Street Church spire near it (top, left), the area's original and best "skyscraper."

Nor is it compatible with the building it was part of the redevelopment of: the neoclassical Filene's (right), designed in 1914 by noted Chicago architecture pioneer Daniel Burnham, most renowned for its bargain basement where wedding gowns and prom tuxes could be had for rock-bottom wages.

Let's face it—a penthouse condo that dropped for $45 million is so out of place here (which it is, physically, being way up there), beyond the clear clash of the glass with the historic ornamented masonry and pressed metal that refined the Filene's shopping experience, even for basement-bingers. 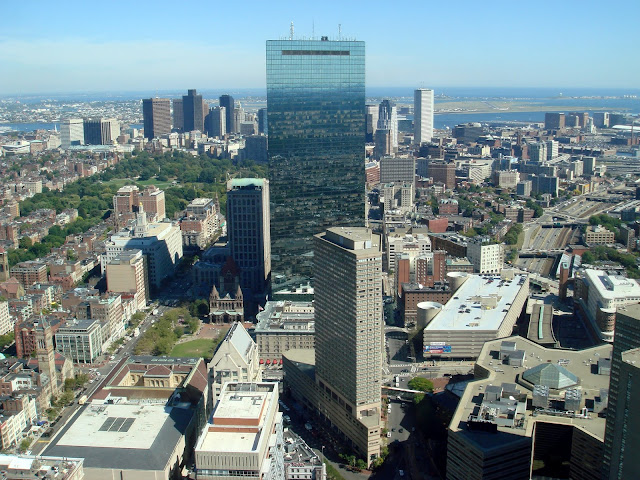 Designed by Henry Cobb, renowned for the John Hancock Tower (1976) in the Back Bay and the John Joseph Moakley Courthouse (2004) in the Seaport District, One Dalton hardly lives up to the promise of those two groundbreaking buildings at all. 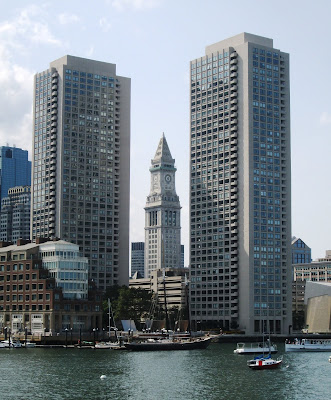 In fact, it regresses to the thrown-up commonplaceness of one of his first Boston projects, Harbor Towers (1971), which essentially recycled modernist design elements that Mies Van der Rohe and Le Corbusier had already pioneered in Chicago's Lake Shore Drive Apartments and France's Unité d'Habitation, respectively. 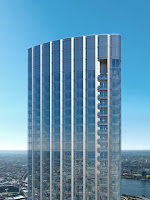 Be honest: Would you really want to pay $34 million to live all the way up there? With nothing surrounding you all day but glass and sky, it would get pretty dull and lonely, wouldn't it?

Of course, a drop-in from an airplane is another matter...