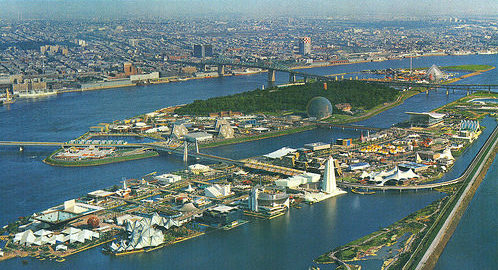 Today marks the 150th anniversary of the Constitution Act unifying Canada, New Brunswick and Nova Scotia as the Dominion of Canada in 1867. Canadians have another reason to sing "O Canada": it's also the golden anniversary of Expo 67, the Montréal world's fair that marked Canada's centennial by flaunting futuristic fantasies in new architectural forms that showed how science and technology could stretch the imagination and ally diverse world cultures in common goals.

I remember little of Expo, save for the two exhibits pictured here: Buckminster Fuller's Geodesic Dome (the United States Pavilion, above) and Moshe Safdie's Habitat 67 community (left). Perhaps I resented being pulled out of Kindergarten for a week, hence missing my classmates and a "Leaves Change Color" crayon/construction-paper project my whole class had done while I was away.

But the Red Maple Leaf turned out to be the better choice for me, because Expo 67 was my earliest exposure to modern architecture and the ways it can enrich our lifestyles while protecting our natural environment by economizing on building materials and land use. And the Tinkertoy framework of Fuller's "world" and the block-building playfulness of Safdie's "city" did captivate my young imagination, and those of thousands of others, more than the other exhibits did (which may partially explain why they're virtually all that's left of Expo).


Habitat must have recalled the Lego bricks and building blocks I loved in Kindergarten. For this Jenga-like hodgepodge of 354 prefab concrete modules fused the spirits of all three. (A Safdie spokeswoman said Lego played "a role in the design—initial models of the project were built using Legos; subsequent iterations were also built with Legos.")

This helter-skelter of bump-outs, cantilevers and shifting block-stacks gave each unit a special individuality that was designed to feel like a house as well as a unit to the resident. This radically challenged my traditional view of the apartment building as a solid, straight-up streetwall of the sort I was living in on Park Avenue in New York City at the time (right). Habitat was not only more jagged and fragmented—like a basalt rock, an Aztec ruin, or a fishing village in Mykonos, Greece—but also lighter and loftier in external appearance and internal feel. This made some of its units seem to float in space, Jetsons-style.

And I did feel in space-travel mode as I paced its connecting paths, bridges and catwalks, observing how sea and sky views streamed in anywhere I turned, how one family's roof was another one's garden, and how the interlinkage forged a sense of intimate community among the 158 units.

Exploring the units themselves as I went along the walkways felt like my Kindergarten games of "Go In and Out the Windows." Each unit felt like a logical extension of the next, and all were indelibly interconnected to one another so that one unit's roof was another one's terrace and one unit's floor was another one's awning. This achieved a delicate balance between light and shade, airiness and groundedness, privacy and community. It was an immaculate reconciliation of opposing yin-yang forces that made the development a cohesive yet individualized "habitat" in the truest sense.

With that I decided I wanted to live in Habitat when I grew up. But that was not to be, or ever will be, given how pricey the units have become, according to a report in The Guardian.

The United States Pavilion grabbed most of my attention at Expo, probably because it immediately recalled the Unisphere (right) that had been my strongest memory of the New York World's Fair in Flushing Meadows–Corona Park, Queens, two years prior. In both cases I was awestruck by the way a slender web of crisscrossed steel arcs (right) and a steel honeycomb of hexagons and triangles (above) sculpted majestic globes with space-age auras that appealed to, once again, my fascination with space travel. And this would become a virtual reality when my family rode high on the minirail that was transporting us into "the world," as we called it... 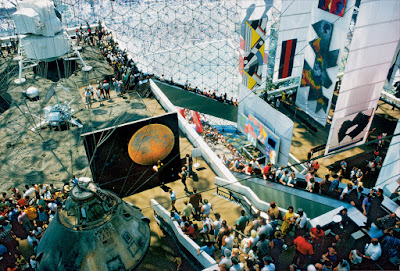 ...a world of space flight, high-tech, pop-art, op-art, and other funky, folky, chic, cool, hot, hip exhibits of the USA as the world leader of innovation across the universe, kudos to the design daring of Peter Chermayeff and Cambridge Seven Associates and, yes, the engineering ingenuity of Bucky's bubble. 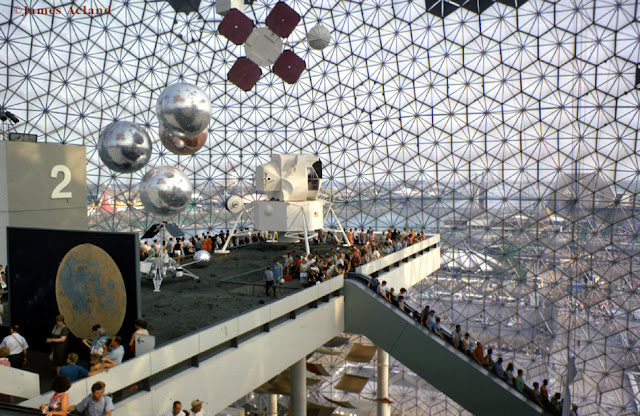 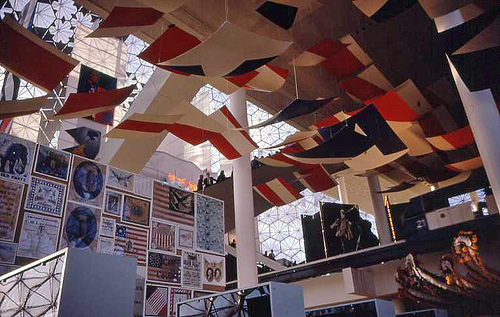 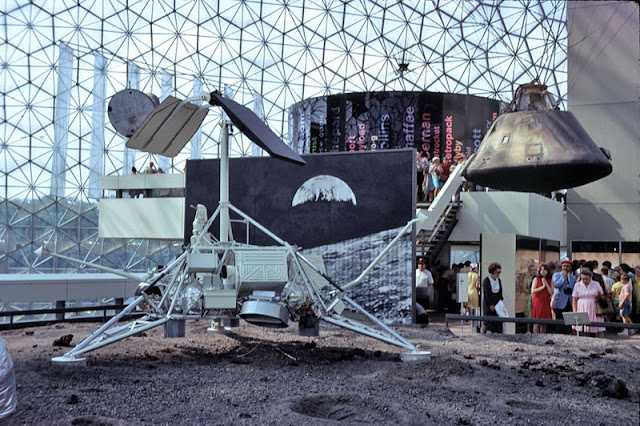 Those two spectacles of space and structure made all else at Expo pale before my eyes. The ultramodernism of many of the pavilions was bent on showing off the shock of the new and the wave of the future in world architecture with more style than substance. Others were simply dull, and historical hubris marred the Algerian, Chinese, Egyptian and Maine pavilions.

But Moshe's mountains and Buckminster's ball did it differently: they innovated space and form solely from the architectonic sciences and the characteristics of materials: moldable concrete with glass for Habitat, tensile steel trusses with acrylic cells for the Dome. They made more space with less material, preempting sprawl and skyscraper.

This model for both conservation and wise use of natural resources ripened the Geodesic Dome for repurposing as the Biosphere Environment Museum. Fuller's original steel-web shell encases a complex of sustainable buildings, green roofs, and indoor gardens. Designed mainly by Eric Gauthier, they showcase the aquatic ecosystems of the Great Lakes and the St. Lawrence River, conserve threatened indigenous plant species by restoring their natural ecosystems, and demonstrate the capacity of planted roofs to mollify heat islands and carbon footprints, muffle sound, increase energy-efficiency and purify water and air. In and around the dome's biosphere are also exhibits on water conservation, climate change, biodiversity, ecotechnologies, and the type of sustainable building development pioneered by forward-thinking architects like Fuller and Safdie.

So, yes, the sacrifice of a Kindergarten leaf project to witness Canada turn over a new leaf in architecture history was worth it. Habitat and the Geodesic Dome were models for the eco-building we now need more than ever to save the very world that Expo 67 was honoring—socially with global exhibitions, symbolically with the Dome.